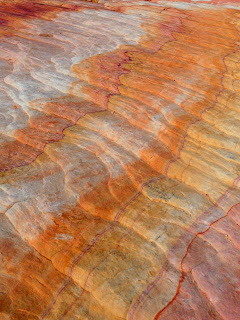 Earlier today our group got together for our monthly launching.  5 people participated.  To recap the process, we rotate around the group with one person being launched, with one person serving as the shaman, and the rest holding space and tracking the launchee’s journey.  At the start of each journey, we all expand our Core Essence, thus creating a group vessel.  We are so unified in this process that the energetic shift for each journey applies to each of us at the same time.

The intent for my launching today was to journey up to Source and to rest there a while.  I have been very busy with clients these last few weeks, and really needed to recharge.  Upon expanding my Core Essence, I could tell that there were a lot of people inside that huge bubble.  Perhaps these were all of the clients that I will be working on in the near future?  I thought that was really nice!

I then proceeded to travel upwards at a fairly rapid pace, going through many layers of colors, vibrations and sounds.  I then got to what I have been labeling as “Source”, which is a really sublime golden honey colored zone of vibration.  When I have visited there before, it was wonderful just to rest, floating in a space where there were no thoughts or emotions, and no movement whatsoever.

This is what I had planned to do today, but that was not what happened.  I had barely gotten to the Source when a large diagonal crack started to open up in the ceiling.  A blinding pure white light started to peek through.  So of course, I went through this crack when it got big enough to accommodate me.

I found myself in a realm that was totally new to me.  The colors were shades of gold, and the beings there were also golden in color.  They were tall and wispy and were wafting around, in addition to occasionally merging and separating.  I surmised that these were the creators of our Source.

I tried communicating, which was almost impossible.  These were not individuals at all, and I found that communication with a group consciousness was difficult.  There was no language that would suffice.  Instead, what happened was that they started working on my energy field and body.  I definitely got the impression that I was being cleared and restored to my original state as one of them, a creator being.  I could actually feel work being done to my physical body, changing it into one that was taller, thinner, and totally flexible.  Like them!

About that time, I was called back to the group, and it took me a bit of doing to get fully back into my body.   Wow!  That was some trip!  Because I ended up in a realm that I had never visited before, at least consciously, it was and still is very hard to describe.  I may be going there again in a future launch.

Just know that for every event like this that is experienced by one, these imprints are put into the mass consciousness and are available for all to connect to.  This isn’t just happening to me.  As one evolves energetically, it benefits everyone.  As each one does their work, the whole is lifted up.  We do not evolve as a group consciousness, but one by one a bit at a time. 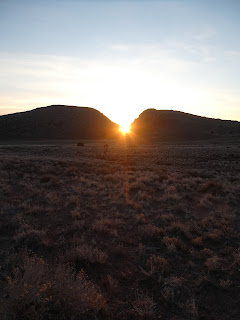 This evening I drove out to our local sacred site, the Parowan Gap, to enjoy the setting sun for the Spring Equinox.  What a difference from last year at this time!  Tonight it was balmy, no wind with a temperature in the low 50's.  Last year, I went out 3 nights in a row to get my photo.  The first night it was cloudy at sunset, the second night it started to rain at the appropriate time.  The third night, I finally got a decent photo, but it was bitterly cold and I was frozen like a pop sickle!  I realize that I am a day ahead of time, but we will have some bad weather coming in, so tonight was my best opportunity.  On top of that, I was the only one there at this very special site.  Wonderful!  I will do my bowl burning tomorrow night here at home.

So this is just a reminder to do some sort of ceremony or honoring of this occasion. The Equinox is all about balance, so if your life is out of balance in any way, please address that now.  It is a powerful time to do so.  As each one of you shifts, we can affect the world in a positive way. 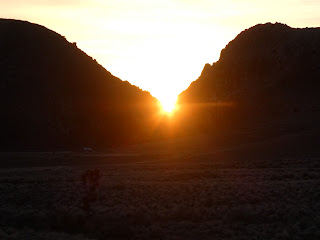 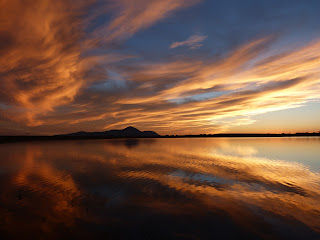 So now we have another round (or 2 or 3 or more) of turmoil, conflict and uncertainty happening on the planet.  All designed to generate fear.  Just when we think things are evening out and starting to normalize, something else comes along.  Is this all a part of a plan?  On an energetic level, is this the age old battle of light vs. dark being activated once again?  I suspect that it has never gone away, and just resurfaces from time to time.

Someone has to hold the higher ground no matter what is happening.  That someone is you.  By holding the higher ground, you radiate that elevated energy to those around you for the indirect benefit of all.  That is true service work.  I also wrote about this time of disconnect and turmoil in my New Years prediction post here.

So here is a very gentle reminder to those of you who know yourselves to be spirit having a temporary physical experience.  Be the observer of your reality.  Take a step back and connect with your Inner, Higher and Greater Selves.  If you feel drawn to engage in one of the issues currently plaguing our earth and humanity, go within first and try to determine what the unhealed issue is that you are carrying regarding what is going on.  Do you play the victim?  Do you have unhealed issues of being abused, abandoned, and neglected?  Are you living a life of lack and limitation, or poverty consciousness?

Just know that any and all of these issues exist only in the physical, emotional and mental realms, and that you do not take them with you when you finally transition out of the 4 D arena.  On the other hand, if they are not resolved by that time, you will be repeating them over and over until they are.

These experiences are also for the learning and might I say adventure of your greater being!

Being a long time shamanic practitioner and energy healer, I know that unearthing certain issues that you are carrying within can be tricky.  We are talking about shadow work here.  Know that just by acknowledging the issue in any way that you can is about 85% of the healing process.  If nothing else, hold a higher vibrational state for yourself as consistently as possible.  Focus on the divine and perfect being that you are.  Your personal storm clouds will clear eventually!