I am very pleased to be once again presenting a workshop for Rise Multiversity.  Our topic will be “Journeys to Meet Your Non-Human Soul Aspects”.  We will be meeting on Saturday May 6, at 5 PM Eastern/2 PM Pacific time here in the US.  To register for what promises to be a very interesting workshop, please go here. 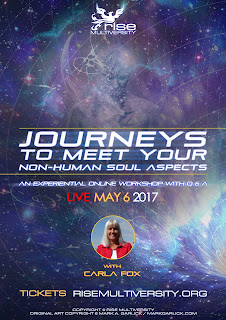 Who are you really?  We as spirit having a human experience are often so focused on the here and now of earthly life that we fail to recognize that we are great cosmic beings with soul aspects in many realms and star systems.  Please join me as I guide you through several journeys to discover who you are as a cosmic being.  I will be helping you to expand your horizons and embrace your greater self.

Our target will be other soul aspects of you, not past lives or genetic ancestors.  These beings will be living their lives in real time as you live yours here, and will most likely be non-human, or as we like to call them, extraterrestrials.  You will have a chance to also see how your lives are entangled and what affect that has had on you here.  We will contact positive and negative aspects, and by the end of the workshop, you will have a greater understanding of who you really are on a much grander scale.

Be prepared with a pen and some paper, as you will want to journal during the workshop.  I will also be offering a different kind of Q & A at the end of the workshop where the participants can not only ask questions, but describe their experiences.  You are invited to join this group for a very enlightening experience!  As this is the first time that I will be presenting this work, we are all bound to be surprised by the results.
Posted by Carla Fox at 10:10 AM No comments: 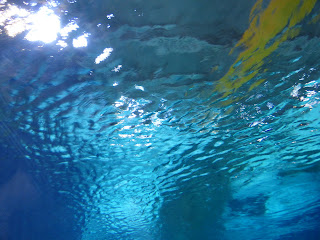 Last week was pretty crazy and unusual for me.  About a week ago, I started having some vertigo off and on, and lots of nausea.  It got so bad that I couldn’t drive, and had to have a friend pick me up and take me to the chiropractor.  He wasn’t quite sure what was going on, but gave me an adjustment and did the Epley Maneuver on me.  That helped tremendously, and a few days later, I finally got back to normal.  Turns out that the issue was probably an inner ear thing, where the small crystals in the ear get displaced somehow, and vertigo is the result.  Luckily, the Epley Maneuver can be done on oneself at home, which I continued to do after seeing the chiropractor.  It is for realigning those inner ear crystals to restore balance.  What caused this?  Could have been the plane flight a few days before, or even a rapid head movement during Zumba class.  Anyway, all better now!

I was also thinking about certain events that could throw humanity into this kind of dizzy, disoriented and ungrounded state.  Pole shift perhaps?  Energy weapon?  We would all be disabled immediately.  That’s kind of a creepy thought.

This experience gave me great sympathy for those who suffer from vertigo or dizziness.  What a pain!  All you can do is sit around and try to keep your head upright without making any sudden moves.  As I am very active all day long, I found that condition quite restricting.  What if one is paralyzed or restricted to a wheel chair, or bedridden?  This was a good reminder that quite often, we can be prisoners of our own physical bodies.  We are not victims of the body, however, as any such restriction is part of our plan, and there is something to be learned and gained from any physical issue.  It is highly recommended, however, that the body be nurtured and taken care of to the best of our ability, as it is the temple for our spirit and our vehicle for spiritual evolution in physicality. 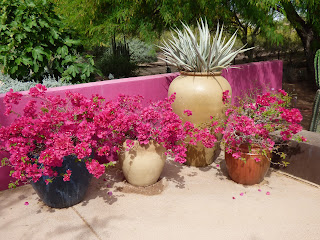 Usually when you do not hear from me for a bit, it means that I have gone out of town for some R & R.  Such was the case last week when I traveled down to Phoenix, Arizona to hang out with 2 long time girlfriends that I haven’t seen for several years.  Greta was my roommate for all of my shamanic trainings, and she has lived in Tempe for well over 30 years.  Lynn is a friend of mine from Illinois, and she just relocated to Phoenix to be near her son and his family.  Needless to say, there was much discussion and debate about the weather in that area, as the temps got up to 91° a few times while I was there, and would definitely go higher as the spring and summer seasons progress.

I cannot emphasize enough that it is important for the spiritually evolving among you to live in an area that your physical body likes.  The climate must be to the body’s liking, including humidity, temperature, even wind patterns.  I like to live in a 4 season location, but many people do not like to be in the cold and snow. Population density should be considered, too, especially if you are a sensitive person.  Even the length of the days during certain times of the year can make a difference.  That is why I moved to SW Colorado from Montana.  The winters were just too dark and dreary, and I realized that I needed much more sunlight.

Anyway, during my week in Arizona, we really packed in the activities.  It was go, go, go every day.  I told Lynn that she would need a vacation after I left to decompress from our fun time.  Below are photos of the places we visited.  You will see the best of the bunch and one of each, as I took around 500 photos.  I am getting ready to go out into the canyonlands of SE Utah next week with my archeoastronomy friends.  Photos of that will be forthcoming!
An interesting tidbit here--My friend Lynn's birthday was on April 11th, and part of the reason for picking that week to visit was to celebrate with her. Both Paolo Soleri of Arcosanti and Frank Lloyd Wright died on April 9th, 54 years apart.
Posted by Carla Fox at 11:31 AM No comments: 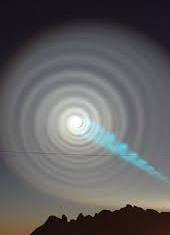 Over this past 3 days, I had a dedicated and marvelous group of QSH practitioners here for an advanced class.  Even though the weather was less than cooperative, the class went off without a hitch.  It is amazing what can be accomplished when a group comes together in a unified way!

We had an interesting phenomenon happen during our last exercise on Saturday afternoon.  The students were doing a QSH practice session on a remote client.  I chose a sound track that put their brain waves into Gamma, or 40 beats per second, and lightly guided them through the protocol.  This particular segment was to take about 20 minutes.  We started out as usual with me announcing the segment and the time limit through my microphone.  I then settled in silently, holding the space and drifting with the sound track.

After what felt like a very long time, I checked my watch, and was surprised to see that only 5 minutes had passed.  Something felt off time-wise.  I closed my eyes and settled in again, and after another very long time, only 5 more minutes had passed.  We were in some kind of time warp.  When I checked with the students after the exercise, they had noticed that timing was off, but since none of them had been checking their watches, they did know by how much.

What caused this?  First of all, since we were working at a higher vibrational level, time appeared to be slowed down, when in reality, we had sped up and time was probably running normally.  Reminds me of the Matrix movies.  It also may have had something to do with the sound track that we were using.  Now that I think about it, the familiar music also sounded off and otherworldly.

Could it have been the 5 M class solar flares that shot off from the sun this weekend?  They were bound to affect something!  This all shows that time is not a set thing, and that it is malleable and that time itself, or at the very least, the perception of it can be altered.  This is not the first time that I have encountered a time warping while I was teaching a class, either.  Nevertheless, it does throw one off a bit when it happens.

We finished off the weekend with a launching for the students, none of whom had launched before.  Several of them were planning on starting launching groups back home, and I was thrilled that that practice will be moving out into the world.  Everyone did exceptionally well for first timers, and several of them threw off so much heat while they were on their journeys, that the rest of us could physically feel it.  All in all, a wonderful workshop and weekend of spiritual comradeship.

PS--As of Tuesday April 4th, the sun has now fired off a total of 7 M class solar flares.  This is unusual, since we are still in a solar minimum.  Luckily, they are not earth facing.
Posted by Carla Fox at 12:49 PM No comments: