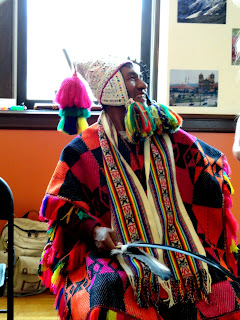 Yesterday, I had the opportunity to attend a very lovely event in Durango, Colorado, which is about 50 miles away from my house.  As long time friends and readers of this blog may know, I was a trained shamanic practitioner and teacher of that tradition for many years before I created the Quantum Sphere Healing protocol.  The tradition that is still very dear to my heart is that of the Q’ero shamans of Peru.  The Q’ero people live in the high Andes Mountains above 14,000’, and maintain their traditional lifestyle to this day.

Terry and Rose Stout of Durango managed, through great effort on their part, to bring a Q’ero paqo (healer) to their town to do a group ceremony and private healing sessions.  His name is don Eduardo Chura Apaza.  Yesterday I attended the public ceremony at which a group despacho, or medicine bundle, was created by don Eduardo with help from everyone present.  The theme for this sacred bundle was “Visioning Highest Consciousness for All Beings and For Our Earth”.  The despacho was then burned at a fire ceremony later in the evening, which is how the positive intent of the group is released. 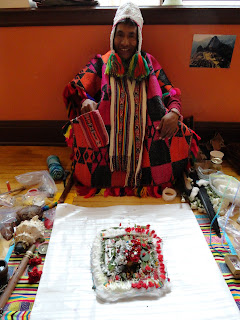 It has been many years since I was in the presence of a Q’ero paqo, and I had forgotten how wonderful they are.  The Q’ero live a nature based life and are also intimately connected to the quantum field and their local sacred mountains, or Apus.  There are less than 500 of them left in Peru, and they are united in a group consciousness through their connection to the quantum field.  They are heart centered and joyful at all times, and that energy is carried over to any one that they meet.  What a delight to be in that energy again!

Don Eduardo held the higher dimensional sacred space for the creation of the despacho, and that space was warm and openhearted as well.  I know that everyone present was changed as a result of being in that presence, myself included.  It was a good reminder for me to live life from the heart and continue to connect deeply every day to the natural kingdom.  Enjoy the photos.  You may also be able to tap into the lovely energy from yesterday. 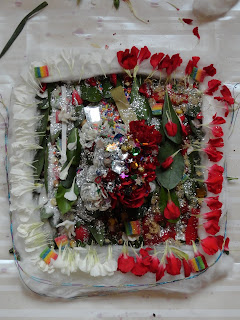 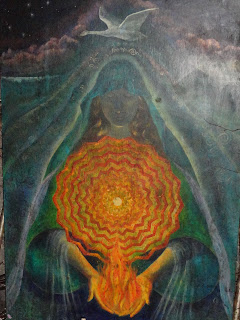 Happy Vernal Equinox to all of you!  Last night I had a group of marvelous women here for a sacred fire ceremony.  The weather was balmy and all of the stars were out in their full glory by the time we were finished.  The group came together marvelously, and at about the half way point in the ceremony, I could feel a big and supportive maternal energy enveloping all of us.  Wonderful things can happen when people of like mind come together in sacred activity.  For those of you in the Northern Hemisphere, Happy Spring! 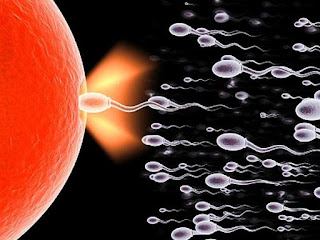 In my last post entitled “Life in a Box”, I described an electrical cube shaped being that was flying through space.  This being had a tail much like a sperm would have.  From the side, it looked like a kite.  This image has haunted me through the past few days, so I decided to use it as a theme for our March launching, which wrapped up a few hours ago.  My intent was to find out what is was and where it came from.

As soon as my consciousness expanded well beyond my body, I was out in space looking at not one, but many of these flying 3D cubes, all heading towards earth.  The first order of business was to find their location of origin.  I was pulled towards a very large glowing vessel on the far side of our Milky Way Galaxy.  If I were to assign this a dimensional level, I would say 10th dimension.   I then proceeded to enter this structure.

The predominant energy there was one of excessive electricity.  Sparks and streams of electricity were flying everywhere.  It was a totally non-human non-organic energy.  This structure turned out to be a manufacturing plant for the flying cubes.  Everything was done mechanically, and there were no conscious beings present.  Each cube was being activated and programmed before leaving the structure.  Undoubtedly, this was AI programming at work.

The interesting thing about this next bit was that instead of entering our galactic creation through the Stargate Milky Way to start the process of stepping down through the dimensions, these cubes skirted around the stargate and proceeded to enter our galactic creation that way.  This tells me that entering through the stargate is the organic path, and doing it this other way is the synthetic path.  These electrical sperms seem to have to ability to shift dimensions at will, perhaps with some sort of electronic programming.   Fascinating!

The flying cubes then proceeded to go in a variety of directions down through the dimensions, heading for a variety of star systems.  The ones that came to our solar system entered into the center of our moon first.  After a bit of time, they streamed towards earth in a much smaller form.  Could this be the negative programming coming from the moon that we are being bombarded with every day, according to George Kavassilas?

I then made contact with our earth mother to see if she was being negatively impacted by these electrical invaders.  She said no, that her expanded 5th dimensional core could not be penetrated by them.  What an aha moment!  Our expanded Core Essence has the same vibration as the core of the earth, so if we are also vibrantly connected to and expanded through our 5D core, we cannot be affected, either.  Wonderful!

Keep in mind that the excessive use of electrical devices such as computers, smart phones and the like, or being in a place where there are strong electromagnetic energy fields can weaken our personal energy field and create an affinity for these electrical cube-like beings to enter, thus delivering their programming.  I suspect that a large portion of humanity, especially in the western world, has already been invaded in this manner.  Be vigilant and make conscious choices.  Pay attention to your thought processes.  This way you will hopefully be alerted when unwanted thoughts have entered your consciousness via this AI programming.
Posted by Carla Fox at 1:38 PM No comments:

Life in a Box 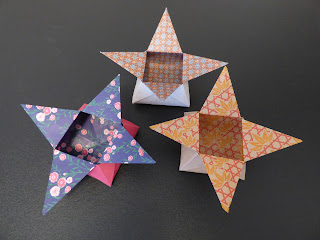 In the early morning hours today, during the time when dreams are easier to remember since sleep is lighter, I had an interesting dream.  Not because of the content, but because of the general tone of the dream.  The whole thing felt very restricted, ordinary, and lacking in energy.  It was also in black and white!  This is not the norm for me, as my dreams are usually in vivid color and full of all sorts of action.

That got me to thinking about how so many people live their lives.  How many of you are living a life of black and white?  Coloring within the lines?  Playing it safe?  Following the rules?   I am talking about living life within a box.  Part of this also involves pandering to your perceived limitations by limiting yourself according to your beliefs around what you are or are not capable of accomplishing.
Fortunately nowadays, with the heightened and accelerated energies that we humans are all experiencing, it is easier to burst out of your own personal box.  But, how did we get in this condition in the first place?  Undoubtedly, it is because of the ongoing and eons long crackdown on human autonomy and freedom coming from a variety of sources.  After all, the cattle are not allowed to escape the corral to roam free or they might become wild animals again!

One of the images that occurred earlier this morning before the above mentioned dream was that of a cube with rhomboid shaped sides flying through space.  This cube had a tail on it like a sperm, and its surface was imprinted with what looked like electric circuit boards.  I could see the sparkling streams of electricity shooting around in the circuits. This electrical organism was certainly a sentient being.
So now, my thoughts are racing trying to determine what this is.  Is this an AI creation?  Is it an actual sperm designed to inoculate a society with the seeds of AI technology?  Is there an egg somewhere that is the target of this sperm?  Is this how the restrictions of the box patterning entered not only our consciousness but mutated our DNA as well?

It takes courage to break out of your own personal box.  I deal with clients often enough who, in spite of the successful healing work that they have experienced, cannot bring themselves to take a step forward on their own behalf.  Some of these people stop working with me because of their own limitations.  Another example.  I have a friend whose husband left her last fall.  Her neighbor invited her to come next door and help herself to some of the apples on her tree.  Even that sent my friend into a tizzy of uncertainty and indecision.  As far as I know, she never took her neighbor up on the invitation, either.  If such minor dilemmas can keep a person in their box, what does one do when the bigger decisions are presented?

Your spiritual evolution certainly also depends on your ability to try something new and move forward regardless of the consequences.  Break out of your own personal box.  I am here to support all of you in that endeavor!