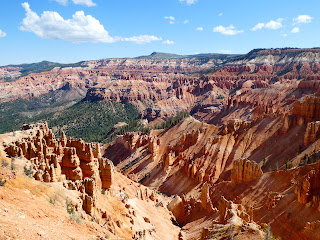 Yesterday was Sunday, and a good day to head up into the mountains early as the tourist traffic does not get busy until a bit later in the day.  There also has been road construction on the route, which doesn’t happen on the weekends.  A perfect time to go up to Cedar Breaks National Monument!

I hiked the Rampart trail, which is a 4 mile out and back with a significant elevation change.   It skirts the edge of the canyon.  The hike out goes down, and is quite pleasant.  One must climb back up on the way out, and takes more time and is quite strenuous.  Best to do it in the early morning when it is cooler!

Here are some photos and video of my really nice morning. 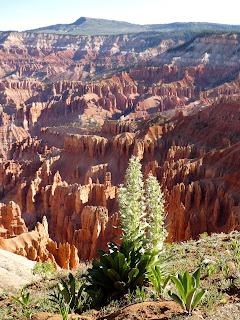 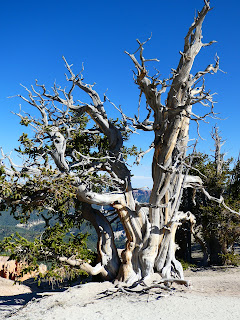 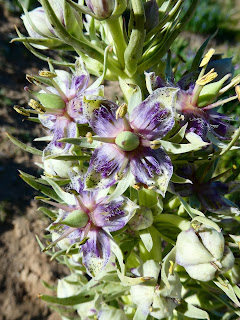 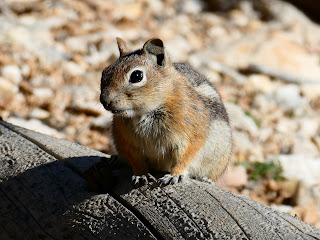 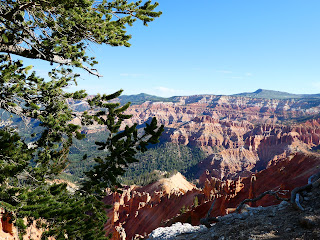 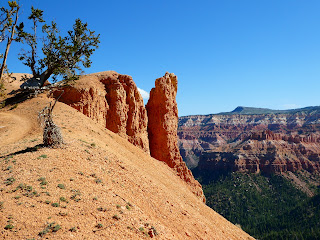 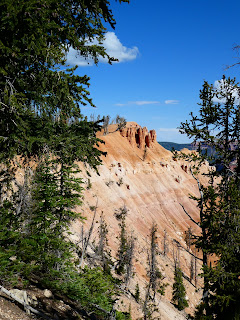 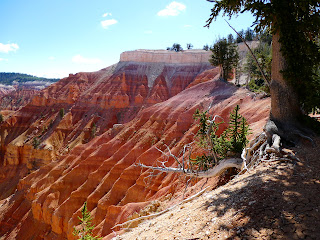 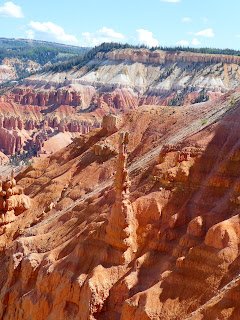 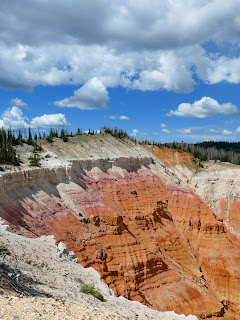 You will have to watch this video clip in your browser.
Posted by Carla Fox at 11:14 AM No comments: 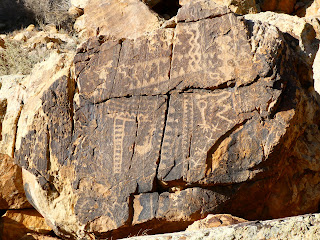 Last night, I drove out to the Parowan Gap sacred site to view the Solstice setting sun and do a small ceremony.  I had already done my bowl burning on the 18th.  The window of opportunity for both solstices is about 5 days, so there is plenty of time to honor those occasions.

I got out to the site early so that I could find a good place for my ceremony.  First, I parked at the small parking lot and walked west through the gap where I took the photo above.  The sun was still fairly high in the sky, but casting shadows on a lot of the rock art there.  Here are a few of the photos I took as I walked back through the gap towards the east. There is fabulous rock art on both sides of the road. 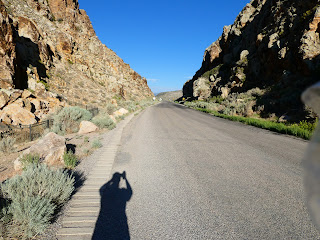 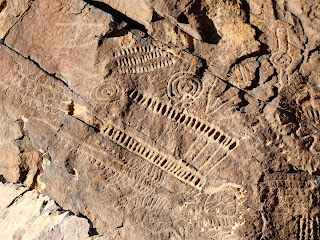 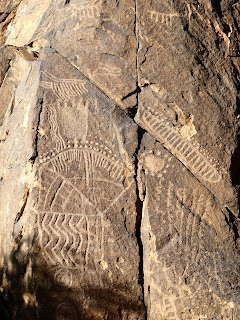 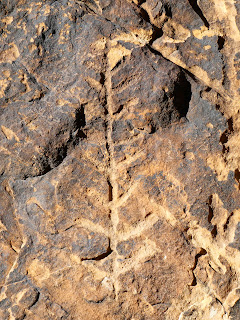 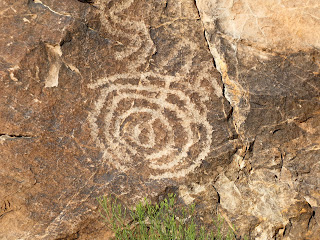 Surprisingly, I heard a Native American flute being played by someone in the gap.  Wonderful!  When I came out of the gap on the east side, the flute player was then standing on a hill, still playing his magical music. 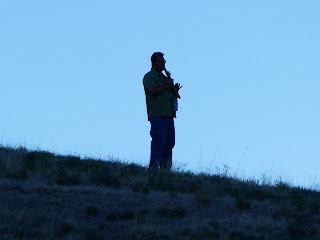 The land east of the gap is fairly flat and surrounded by rolling hills. 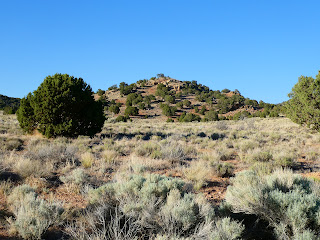 I walked about one half mile down the road to a nice hilly area where I had done ceremony before.  I had already prepared a small medicine bundle consisting of sage wrapped in red ribbon.  After digging a hole, I energized the bundle with my intent, asking the power of our sun, Inti Tayta, to help manifest the intent.  Then the bundle got buried.  Last year at the same time, I did a similar ceremony on that hill.  Both times, part of my intent was to bring some rain to our dry and parched area.  It worked last year, and unbeknownst to me when I did my ceremony last night, we have some rain in the forecast here for the next 3 days!

About this time, cars began to drive up and park all over the flat area.  A party was forming!  Unfortunately, a row of cars parked right in front of the gap, so they are in most of my photos.  I kept my focus on the energy coming from the setting sun, repeating my intent. Here is the progression of the photos as the sun set. 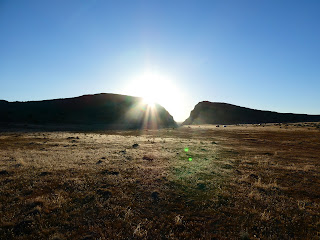 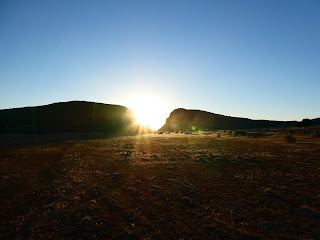 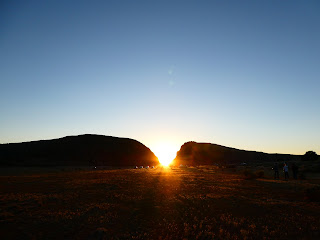 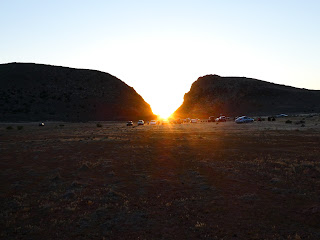 Here is a close up of the sunset with the cars in front. 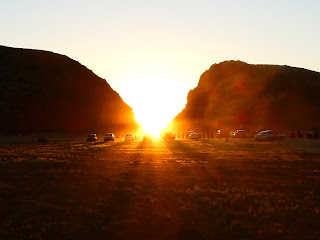 The evening sky was crystal clear this year.  Last year, there was a bit of haze in the air, so those photos had a definite orange tint to them.  The sun was also easier to see as it set last year. 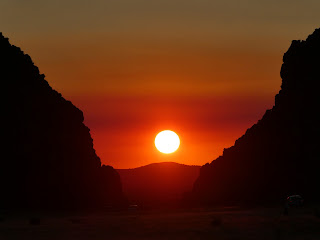 It was almost 9 PM when the sun went down, but still light out as I started heading home. No one else seemed to be in a hurry to leave.  What a delightful evening!
Posted by Carla Fox at 10:23 AM No comments: 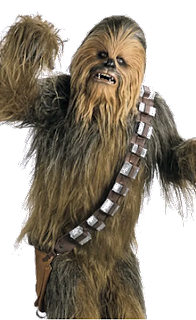 This past week, I worked on a client with a very interesting entity issue. When I start a Quantum Sphere Healing session, I settle into my meditation chair and choose a sound track that puts my brain waves into Gamma, which is about 40 beats per second.  At the same time I look back at the doorway that I have just come through to see if any “beings” are standing there.   These could be extraterrestrials, earthbound spirits or anything else.   Whatever I see there is bound to show up to be removed in the healing session.

On this day, I was surprised to see a very tall and hairy biped with claws and teeth bared.  That was a first for me!  This being reminded me of Chewbacca from Star Wars.

If whatever shows up in my doorway is from an ET race, then there would be an associated electrical implant in the head of my client.   We all have ET DNA, in other words, inherited from either mom or dad or both.  If a person has a particularly strong genetic heritage, an implant is how it would show up.  By successfully dissolving that implant, the lineage would be cleared, and the being in the doorway would then disappear.

Sure enough, that is what happened for my client.  An energetic implant showed up near the top of his cranium, and when removed, the hairy being in the doorway disappeared.  That also tells me that the being was part of an extraterrestrial race, and that my client had inherited that kind of DNA.

So how does this relate to Bigfoot?  If we back up to ET’s, years ago I heard an interview featuring Richard Alan Miller.   He really freaked out the interviewer when he said in relation to UFO sightings, “If you see them, they see you”.    You can have a group of people standing together witnessing a UFO phenomenon, and only some of the people will actually see the craft.  Those would be the people who resonate with the vibration of the particular ET’s, and who have that genetic stream.   In all of the years that I have been doing ceremony outdoors, I have never seen a UFO.  That is probably a good thing!

When I gave the report to my client after doing the healing work, he revealed that he and his father had an encounter with a Bigfoot, and saw that being clearly.  There must have been a resonance there.

Can we also assume that the Bigfoot is an ET race?  Because of their ability to pop in and out of space time, I would say that they are at least inter dimensional.  If my client had an electrical implant related to Bigfoot, that also means that at some time in the distant past, there was some sort of genetic combining at play.  How that would happen, I have no clue!  How about a bumper sticker on his car that says “Mama was a Bigfoot”.  Ha! 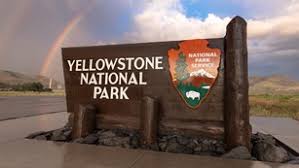 Yesterday I found out that the trip that I had been going on next week has been canceled.  This is the 3rd out of 3 major trips this year that have been canceled, each for a different reason.  Next week’s trip was to take me to Yellowstone National Park.  If you have watched the news, you would have seen that the area has been devastated by heavy rains and flooding from melting snow pack.  If my trip had been scheduled for this week, I would have been stranded there, somewhere.

My travel situation was briefly frustrating, mainly because I had to cancel several arrangements I had made for the trip, but in actuality, I was not in the least bit upset.  My spiritual philosophy is that when one door closes, another one opens.  In fact, several activities for next week have already manifested.

“Go with the flow and stay in the now is” another great philosophy to live by.  How can I miss or regret something that I haven’t experienced yet, like the trip?

Now, there is the other issue of things coming in 3’s.  Like deaths.  Superstition, perhaps?  Or have I just had a string of bad travel luck.  Certainly I have been able to take several 2 or 3 day trips around Utah, and a wonderful 5 day trip down to Las Vegas in May.  Or am I just not to be flying anywhere in a plane?  There must be a message there but I am not getting it.

So I will stay in the now moment as best as I can, and take things as they come.  What I truly need will always be provided!