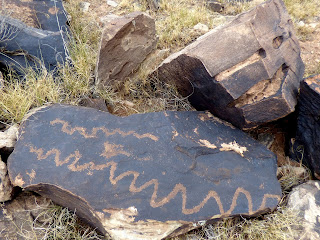 Whew!!!  What a month this has been.  It started out with the last “Tools for Transition” workshop that I did through Rise Multiversity on August 27th, not to mention all of the mushroom hunting and trips up into the mountains during August and early September.  Then we had our Labor Day Holiday here in the US.  Then preparing for and hosting a marvelous group of students learning the Quantum Sphere Healing protocol last weekend.  I am so blessed when a group comes together so nicely as this one did.  That makes my teaching job so much easier.  We even had one student whose glasses broke right on her face during the final healing journey.  She was sitting quietly and felt a lot of vibrating right before that happened.

After a one day break to catch up, I spent 2 days with my friend Virginia and her research group out in the canyonlands of SE Utah doing archeoastronomy work.  The first day provided us with ideal weather, but by the second day the weather had turned and now a cold front has passed through bringing lots of early snow to the local mountains and cold and clammy weather down here.

On Thursday night, I had scheduled a shamanic fire ceremony here at my house in honor of the Vernal Equinox.   The day was extremely windy with gusts as high as 40 miles per hour with more of that and big rain coming in later that evening.  I was looking at contingency plans in case we couldn’t have the fire.  Miraculously, the skies totally cleared up and the wind totally died down by the time we went outside around 7:30 PM.  I call that “shaman magic”!!!  I’ve never had to cancel a ceremony because of bad weather.  Several of us noticed a portal that opened up above the group, and also the strong presence of various star nations as we were around the fire.  In fact it was so nice outside that night that after the fire was finished, we all sat on my lawn in the dark and enjoyed a superior view of the brilliant stars and the Milky Way Galaxy overhead.

Getting back to my trip to the canyons, the photo above is of one of the rock art panels that we found.  It is a good size, being about 1.5 by 3 feet.  It was found just down the road from the big monolith that we worked with during Summer Solstice and on the back side of the hill with all of the other rock art.  Clearly, this was a ceremonial center and calling in the monsoon rains was a big part of that.  The symbolism of the serpent is probably the most common to all cultures on the planet.  In this case, I will venture to say that the aspect of the serpent energy that was used here was that of the spirit of the clouds, and the thunder and lightning.   A Snake Dance may have been done to call in the monsoon rains around the time of the Summer Solstice.  This was to guarantee the fertility of the corn, beans and squash so that a bountiful harvest would ensue in the fall.  The rock art that we were looking at on Tuesday dates back to the Basketmaker III period of 500-750 AD, and very likely even further back to the Basketmaker II era.

Below is the framework for a very old sweat lodge that we saw in a nearby area that we were scouting out.  Note the pile of rocks in the foreground.  This is not as old as the rock art, and most likely dates to the contemporary Navajo or Ute tribes that passed through this land. 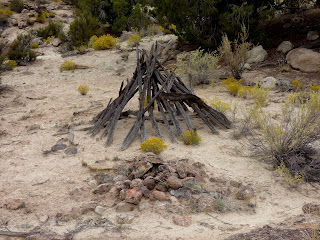 So now I feel like I can finally take a deep breath and get back to a more leisurely and introspective pace of life.  Time to photograph the fall colors, as the aspen trees in the mountains are starting to look good.
Posted by Carla Fox at 10:50 AM No comments:

Two weeks ago, I presented the final workshop in the "Tools for Transition" series entitled "Putting it All Together".  It is available for purchase here. 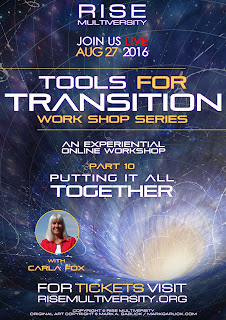 In this workshop, I recapped the Inner Child work, and then went on to work with the very essential Inner Mother archetype.  I have received a lot of positive feedback from this segment of the workshop, as unless one has a healthy and healed mother energy within, it can be very difficult to embrace and love oneself.

The next part of the workshop provided some strategies for recognizing and working through issues when they come up, followed by a very lively Q & A discussion period.   What fun!

Most likely I will be doing a New Years workshop for Rise Multiversity in early January.  Until then, my hope is that all of you will be making use of all of the "Tools" that I have taught during these workshops.  No one can do that for you.  I love the phrase "Make ready for what is to come."  We do not know what that may be, but that does not mean that we can sit idly by and wait, either. 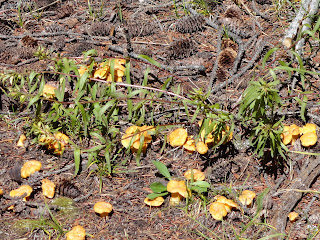 Here in the states, we just had our Labor Day holiday with a 3 day weekend.  The weather has cleared up and I was able to get back into the mountains for 2 days of mushroom hunting.  What a joy it was to wander in the woods on those sunny and breezy days, looking for the choicest of local mushrooms, the chanterelles.  They can only be found above the 10,000’ level in elevation, so a bit of hiking is required.  In fact, yesterday, I was well above the 11,000’ level near the tree line, going from shady woods to sunny clearings.

Here is where the mushroom radar comes in.  I was hiking on established trails, but realized that I had to get off of those trails and deeper into the woods to hopefully find patches of chanterelles that had not been harvested by other shroomers.  I also had to keep my bearings and not get too far off as to get lost like I did last week.  I did eventually get back to the trail after climbing over many logs and slogging through swampy areas, all the while having visions of the search and rescue dogs and helicopters coming to find my dead body!

Anyway, what I did this past weekend was to get off of the trail a bit and stand there and visually scan the area around me.  This process goes back to my shamanic training, where I would visually and psychically scan a client that would stand in front of me, as I looked for heavy energy patterns.  My eyes would always naturally stop scanning and just look at the location of that heavy energy, even if I couldn’t directly see it. 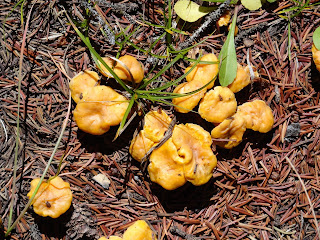 In this case, I was intuitively scanning for patches of mushrooms, so I just kept looking around until my eyes stopped and focused on a particular area.  I would then walk over and see what was there.  Of course, a certain amount of trust went along with this process, as the mind’s objections needed to be ignored.  “What if I strayed too far?  What if I fell into a hole?  What if I got lost again?”  Just trust. 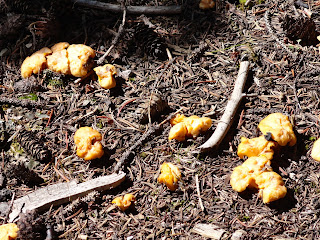 I ended up finding several very nice patches of chanterelles that had not been previously harvested.  The lesson here?  Learn to quiet your mind, activate your inner radar, and trust what you get without hesitation.  You will certainly be rewarded!
Posted by Carla Fox at 7:34 PM 1 comment: 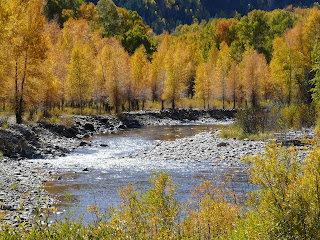 Is it really September?  Where has the summer gone?  Last week I took a drive into the mountains, and the trees along the Dolores River were already starting to change into their fall colors.  Maple trees here in town are showing slight shades of red at the tips of the branches.  It all seems a bit early to me, but after all, time is warping, so who knows?

We had a lot of snow in the mountains even through May, so it took a while for the trails to clear for hiking.  The photo below was taken on July 14th. 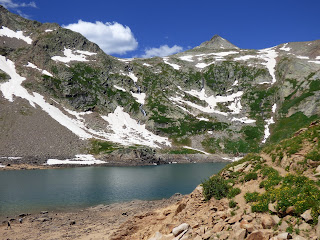 Normally, I would have been going up to the high elevations to pick mushrooms the last few weeks of August, but it has been raining almost every day up there, so I am hoping that once things dry up, there will still be some to pick.  I also had trouble with one of my feet and had to lay off of the big hiking for a few weeks.  So no wonder that my sense for myself is that the summer has been so short!

There have been quite a few discussions lately about time appearing to warp, items going missing only to turn up in an obvious place later, time flying during meditation or a healing session, and tasks in general not being done in a timely manner because time has slipped away.  This seems to be life as we know it, and will not change in the near future.

At the end of the Rise Multiversity “Tools for Transition” workshop last Saturday, we also talked about the sense that we are holding our breath waiting for the real action to start up again.  Do you feel that?  No wonder so many aspects of life seem to be confusing.  Stop, start, twist around, do your best to hang on.

On the other hand, fall is one of my favorite times of year.  Since we had a dusting of snow on our local mountains at the 13,000’ level last week, it may be coming on fast.  The mushrooms may be finished, but there is much to look forward to with the glorious fall colors. 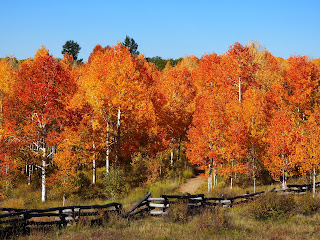