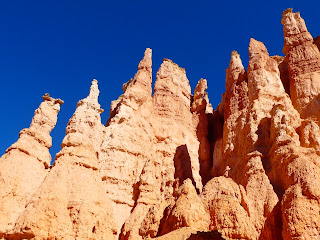 This past weekend I participated in the latest on line conference put on by the Applied Precog folks.  This is an organization that promotes ARV, or Associative Remote Viewing, and they run these conferences about twice a year.  Each one has a specific theme.  For this one, there was a dual theme of “Health and Healing”, and also “Mars”.

The health and healing presentations focused on all kinds of alternative healing methods using energy methods alone.  We even learned a cleaver way to drain heavy energy from a physical problem through doing an ARV session.  My assumption is that this method would have to be used multiple times for it to have an effect.

Most interesting were the presentations on Mars.  The red planet is a hot topic right now, since it has been very close to the earth in recent weeks, and also because several missions to Mars are on their way and will arrive there in February.  We first heard from Joe McMoneagle, who was one of the original Army remote viewers.  In 1984, he was working with Robert Monroe at the Monroe Institute with the goal of harnessing his out of body skills, OBE, to see if he could go out of body to do some spying on the Soviet Union.  Of course, that was also one of the primary aims of the Army’s remote viewing unit.  After 13 months of that, he decided that a more efficient way of doing that was to simply use his psychic skills.  BTW, he also ended up marrying Robert Monroe’s step daughter Nancy!

While there, he was tasked to do a remote viewing session on Mars.  He didn’t know that that was what he was tasked with, as remote viewing targets are always blind to the viewer.  You just go in and do your best to describe the target using the RV structure, and find out about what you were viewing afterwards.  In a fascinating presentation, he described the structures on Mars, the pyramids, and even went inside of them to describe large unfurnished rooms that seemed to be hibernation chambers.  He does go into a lot of this in his book “Mind Trek”, but he covered more of this information in his presentation.

There was also a very lengthy presentation on Mars by Tom McNear, another one of the Army’s remote viewers.  Tom was credited with being the only remote viewer who worked directly with Ingo Swann to develop, refine and test out the RV protocol that the Army used.  It turns out that few weeks after Joe had remote viewed Mars at the Monroe Institute in 1984, unbeknownst to anyone else, Ingo assembled a 5 person team to do the same thing.  The identities of the team members were to be kept secret, but we do know that Ingo was one of the team members, as was Tom.  Most of the resulting information is in Ingo’s book “Penetration”, the latest edition, and according to Tom, there may be an updated publishing of it with even more Mars information.  At the end of the book, Tom lists an e-mail address where anyone who would like to remote view Mars can get in touch with him, as he is still collecting information from viewers.

Unfortunately, the third presenter on Mars, John Brandenburg, was too ill to present, so Tom summarized a lot of his information.  John has written a book entitled “Death on Mars: Planetary Nuclear Massacre”.   It contains tons of scientific research on how Mars went from a planet much like earth, to the wasteland that we now know it as through a nuclear attack from an off planet source.  I have ordered the book and look forward to reading all about it.

Those who chose to worked 5 ARV targets during the conference, with the results scored and summarized for the group.  These included 2 on line craps games, a horse race, a question about the success of the U S’s 2021 Mars lander, and whether President Trump would be inaugurated on January 20th.  The later 2 targets were future predictions, so we will have to wait and see about those.

Needless to say, I am pretty fried today.  Slitting in front of the computer for 4 hours on Thursday, and 10 hours each day including breaks for Friday, Saturday and Sunday is not healthy for my body.  In addition, I rarely miss a day when I am either hiking or taking a long walk.  We had a big cold front go through over night, so no outdoors for me today. That makes 5 days without!  We didn’t even get up to freezing today during the day.   Hopefully, it will warm up enough to go out for a walk tomorrow afternoon.

If you are interested in purchasing the conference, and all previous APP Fest conferences, go to AppliedPrecog.com.  This conference should be up by the end of the week.  It was excellent! 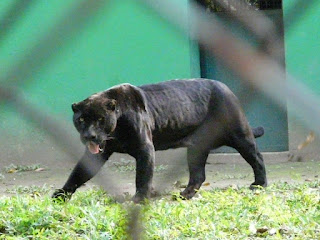 Yesterday, I received a nasty and attacking e-mail from a former client.  The last time I had any contact with this client was 6 years ago!  The first time I worked with her, the session went well, and she reported a good result.  The second time was totally different.  She didn’t look good, was pretty scattered, and couldn’t come up with an issue for the session.  After 20 minutes of back and forth, l told her that we couldn’t proceed, and I refunded her session fee.  It turns out that she had done some drugs a few days before, was coming down and was in no shape to do the work.  Now, 6 years later, she decided to vent some grievances and dump them on me.  This came in the form of what the Peruvian shamans call “houcha”, which is negative heavy energy.

In all of my years of healing work, I can think of only 2 other clients who came after me after their sessions, so this kind of happening is extremely rare. It is not my pattern.  On the contrary, I have worked with many clients who are invaded by other people’s dark energy frequently. The reasons for this are many, and are not within the scope of this particular post.

So what is to be done about this situation?  First of all, I always energetically disconnect from each client after a session, but that does not mean that the client has disconnected from me.  In this case, she claims that she came upon some notes of our session, got all worked up, and decided to send all of that malcontent onto me.  I suspect that something else has been going on in her life to make her so angry.

What I did was this.  I verbally cleared all karma, contacts and agreements with her several times.  Then I scanned my energy field for any heavy energy that the client sent my way, and found some floating around in the far reaches away from my body.  Then, with my hands, I gathered it up and compressed it into a tight ball.  The next step was to fling the ball of houcha back to the former client as hard as I could.  Basically, “return to sender”.  This is a process that you can use if you feel that you have been dumped on by someone else.  Then, do some inner work to determine why you are available to have this happen. I give this homework routinely to clients who are subject to taking on other people’s garbage.  The other person, on a subconscious level, learns that it is not OK to do this to another person.

If I had an ongoing issue with this type of behavior from other people, I would assume that I had more of a problem, and would deal with it on a deeper level.  Certainly, people in occupations such as energy healers, massage therapists, medical personnel and anyone who comes into contact with other people’s energy fields should diligently close the door to their sessions as soon as they are finished.  Disconnect from the client cleanly and clearly.  This does not mean that the other person may not attach to you in return, for whatever reason, as in the case that I am describing. The goal is always to have a clean, clear, and independent energy field at all times.

Getting out of Town 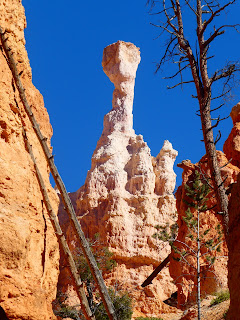 Here in southwest Utah, we are experiencing some beautiful fall weather.  Daytime temps in the 60’s, nights in the 40’s, sunny and clear.  What a perfect time to get out of town!  So over the weekend, 3 days and 2 nights, I traveled with a local friend east of here into south central Utah for some hiking and relaxation.  There is a reason why they call Utah “Color Country”.  At every turn, each vista was more astoundingly beautiful than the next.  Our total hiking distance each day was about 5 miles, covering trails that had a fair amount of elevation to them.

On our first afternoon out of Cedar City, we hiked at a place called Red Canyon, which is in the Dixie National Forest.  The geology here is limestone of the Claron formation, which is stained red by iron.  It erodes easily creating these many formations. 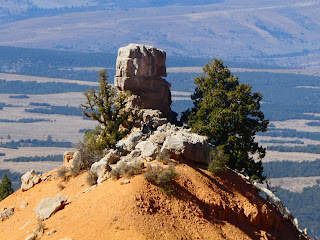 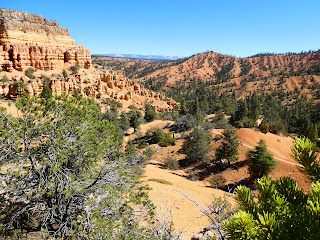 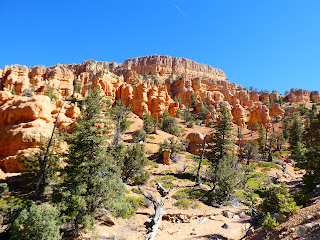 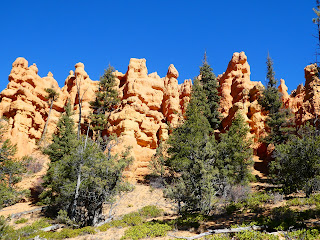 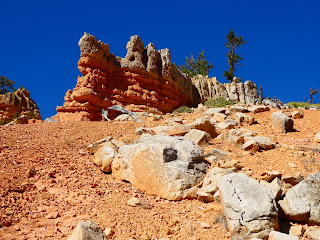 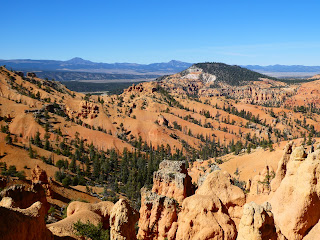 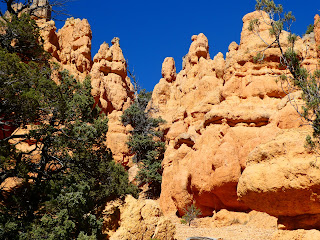 After hiking several hours, I saw a trail sign up ahead and jokingly said that it might be labeled “dead end” and we would have to turn back.  Of course, it listed the trail intersection, but to my surprise, someone had carved “dead end” in the wood.  Another psychic impression to be noted in my notebook! 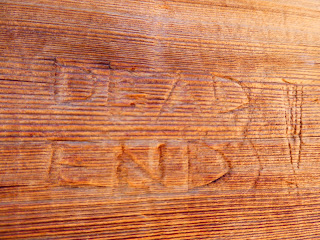 When we were done with the hike, we proceeded onward to our hotel near Bryce Canyon National Park, Ruby’s Inn, which is a historical place founded about 100 years ago.  This is a very large complex, and this weekend, it was totally full and very busy.

After a good night’s sleep, we hiked Bryce Canyon.  Here are 2 videos of this very unique and colorful place, and more photos. 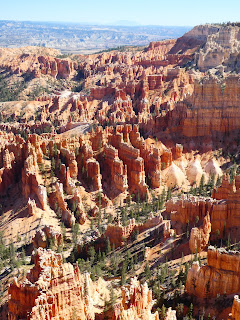 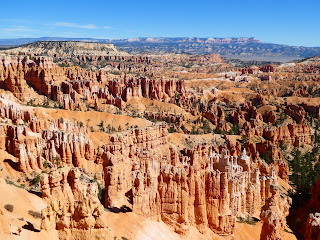 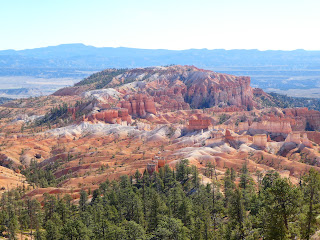 Our final day, after checking out of the hotel, we drove over to Kodachrome Basin State Park.  This location features colorful sandstone formations.  This is an out of the way location, and there were very few people there.  It was a relaxing and tranquil finale to the trip. 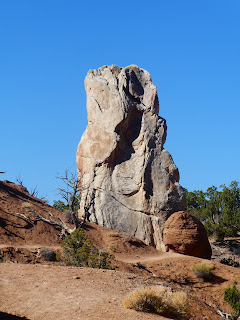 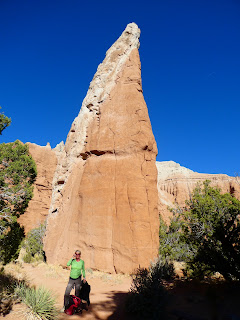 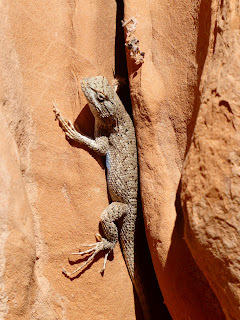 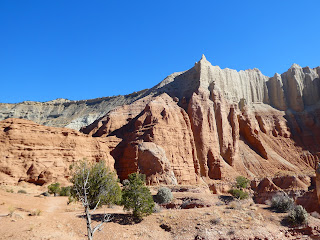 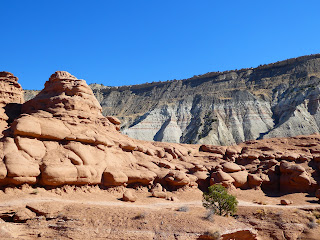 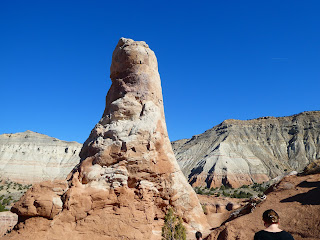 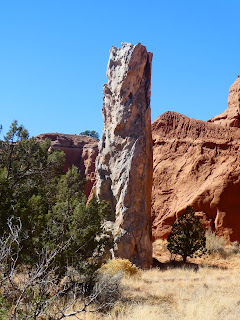 I have been reading a book by Joe McMoneagle entitled “Mind Trek.   Exploring Consciousness, Time, and Space Through Remote Viewing”.  Joe was one of the original, and probably the best, members of the Army’s remote viewing team, project Stargate.  At one time, he was also billed as the world’s greatest psychic.  His personal story is fascinating.  This book is currently out of print, but there are plenty of used copies out there to be had.

One of his recommendations is to keep a notebook where you write down all of the psychic impressions that come to you during the day.  And he means everything!  These can include dreams, coincidences and synchronicities, symbols, subtle inklings, messages from your meditations, and hidden messages that you pick up regarding your interactions with other people.  If you engage in any activity where your psychic impressions are useful, like energy healing or remote viewing, this would certainly be a valuable practice for you.  I have only been doing this for a few days, and have found that my dream state has become more lucid and dynamic.  My aim for also writing these perceptions down is to enhance my remote viewing skills.  Once your subconscious is alerted that you are open to receiving this kind of information, it will send you more!

In the mean time, please enjoy my photos of the fall colors from my hike today on the Spring Creek Canyon trail. 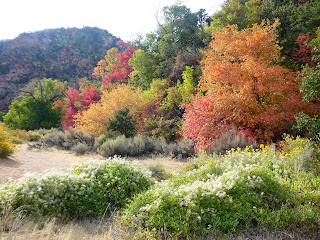 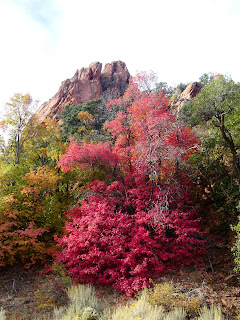 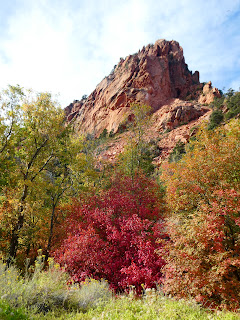 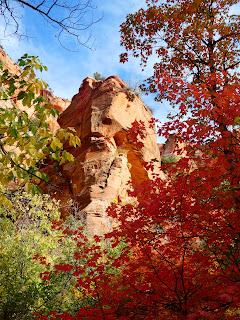 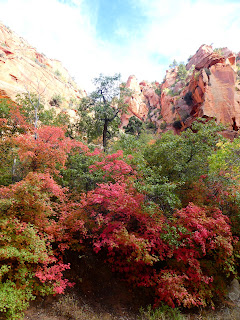 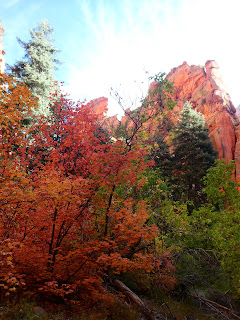 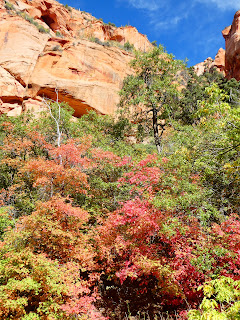 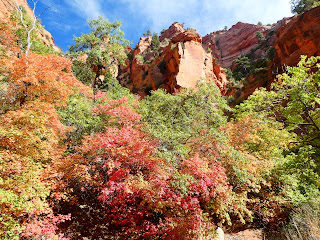 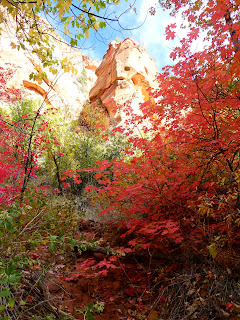