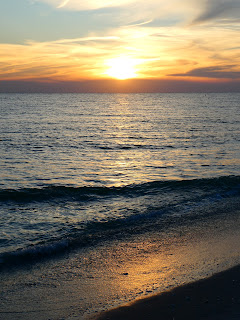 This past week was our annual Thanksgiving holiday here in the US.  It is a wonderful time to get together with friends and loved ones without all of the busy-ness and pressures that are associated with the upcoming Christmas holiday.  Ordinarily, I travel to Indiana to spend this holiday with relatives on my mom’s side of the family.  This year I was invited by my aunt on my dad’s side of the family to join them in Florida.  When I was younger, our family used to travel down to Florida frequently to visit, but I hadn’t been there in years.  The last time I saw my aunt and cousins was in 1995!  What a wonderful opportunity to get reacquainted and catch up.  Also, even though I had been back from the trip to Turkey and Lebanon for a full 3 weeks, I didn’t feel fully recovered.  I needed a vacation from my vacation!

My aunt rented a beach cottage on Sanibel Island that was within walking distance of her house.  My cousin, her daughter and I stayed there, while my other cousin and his wife stayed with my aunt.  So there was a lot of going back and forth, especially on Thanksgiving Day with the meal preparations.  The weather was ideal, and it was so nice to reminisce about our childhoods.  Activities included a lot of walking on the beach, a boat trip to an island north of there to a great seashell hunting beach, lots of good food, and my favorite, birding at the Ding Darling National Wildlife Refuge, which was just a 5 minute drive away.  Sanibel Island has numerous wildlife refuges, and the bird watching was superb.  Below are some photos.
Posted by Carla Fox at 8:21 AM 2 comments: 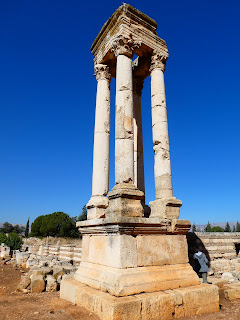 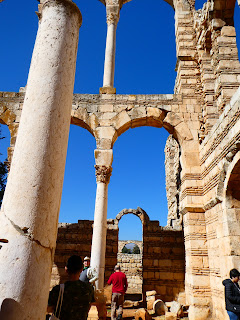 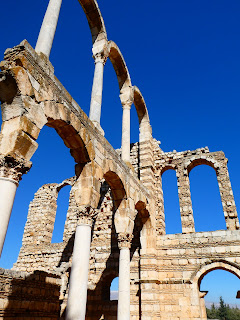 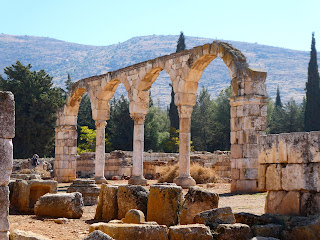 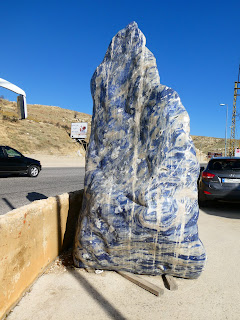 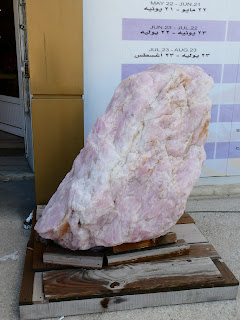 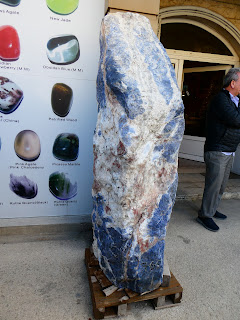 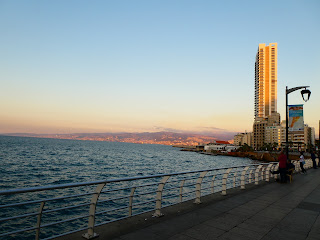 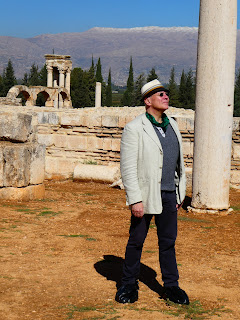 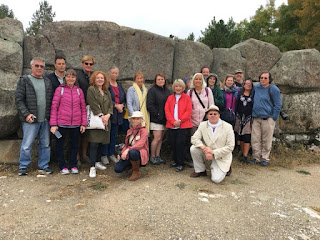 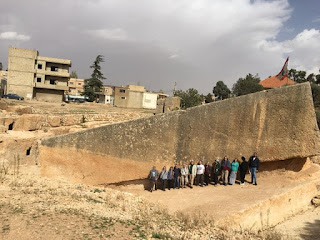 During the two days that we were in the Baalbek area, we visited 3 ancient quarries. Limestone was what was being removed here, not only by the ancient inhabitants going back who knows how far, but also by the Romans.

Our first stop upon getting into the area was at the quarry where the “Stone of the Pregnant Woman” was located.  Mythology states that if a woman touched the stone, it would enable her to become pregnant.  It must have been quite a pilgrimage site.  It’s a good thing that the women in our group were past childbearing age, or we could be in trouble!  By best estimates, this accurately cut stone weighs 1000 tons.  Yes, tons!  Above is a photo of the group standing next to it for perspective.

The largest foundation blocks that we saw at Baalbek were estimated to weigh 800 tons, and no one knows how they were moved and put into place.  This one is more massive than those.  You can see where the level of the surface soil was until it was removed. 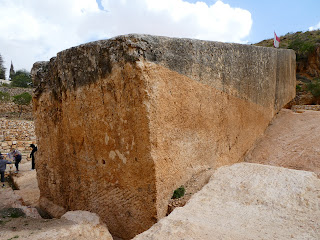 In the process of excavating, another massive stone was uncovered below and next to the first one.  Its weight is estimated at 1650 Tons.  It is possible that there may be more here further below these. 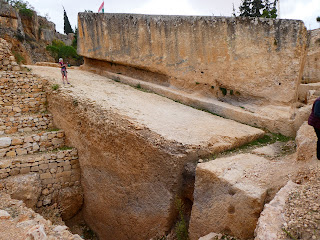 The question is, who quarried these stones, how were they going to remove them, and where were they going to go?  From his experience with quarries around the world, Hugh Newman has a theory that one massive and possibly unmovable stone is always left in the quarry.  Why, who knows! Certainly we saw that at Karahan Tepe, and it is also true at the red granite quarry in Aswan, Egypt, with the unfinished obelisk that is larger than anything else found in that country. 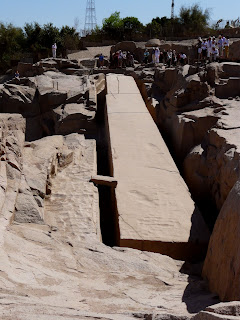 Our next stop was the quarry across the road.  Here we have another cut stone weighing over 1200 tons.  Slices and chunks have been taken out of it presumably for other building projects.  BTW, it was at this point when the big wind and rain storm blew in. 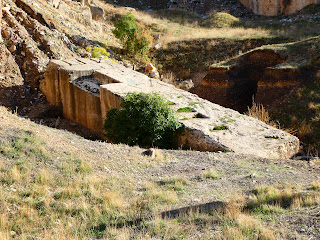 The last stop after our day at Baalbek was to a quarry in a residential neighborhood that was rarely visited by tourists.  It was a hidden gem!  We first visited a cave that was dug into the ground by the Romans.  The purpose of this was to get to the best quality of limestone. 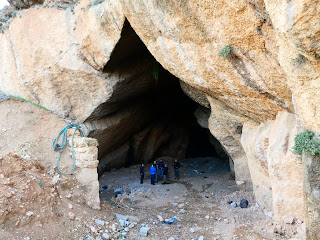 Note the outlines of the chunks of stone that had been removed by the Romans  To me, that does not match up with the massive stone foundations that we had seen at Baalbek.  I am convinced that those were there before the Romans arrived on the scene. 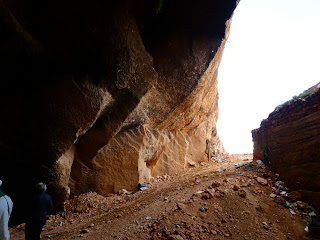 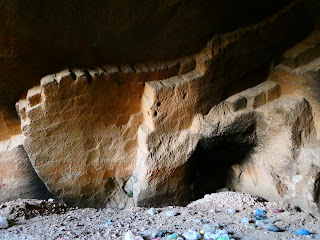 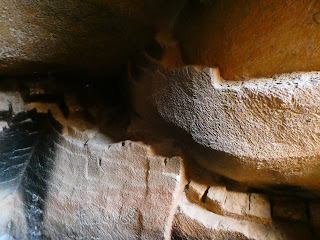 Now we went cross the field to what I have dubbed “The Sun Temple”. 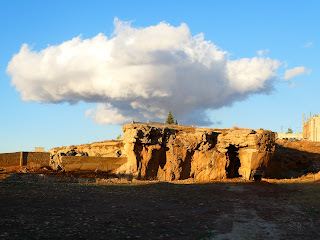 Certainly the rock on this outcropping had been carved, but not necessarily to remove it as building material.  Here is a very fancy cave that had been carved.  Note the vertical grooves at the back, and the light coming in through a square opening on the left side, illuminating a pattern on the grooves. 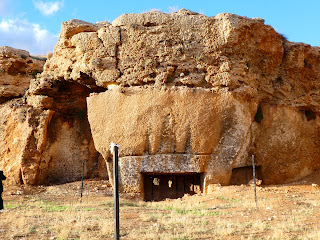 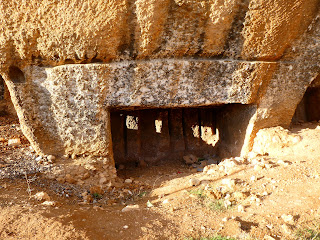 Of course, we were there at the wrong time of year to see either solstice or equinox sunrise or sunset phenomena, but I am convinced that that was the purpose of this site.  Every ancient agricultural society had to keep track of the seasons in this way.  Also note the “stairway” to nowhere that was to the left of this cave. 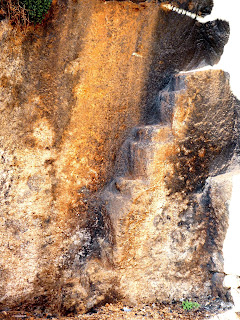 This is a common sight in Peru, and I also noticed at least one of these at Hattusa.

Around the corner and further to the left on the same outcropping was another carved cave.  It was oriented to the west, and the setting sun was shining into it.  Here is a photo of it with a shadow, and then one without the shadow cast by the sun. 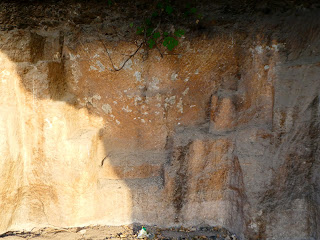 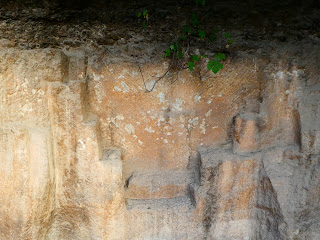 Again, one would have to be here during those sun calendar events to see exactly what was going on.  It looked like a winter solstice shrine, and the exact date of the solstice would be determined by where the shadow lined up with the appropriate carved "step".
Posted by Carla Fox at 9:07 AM 1 comment: