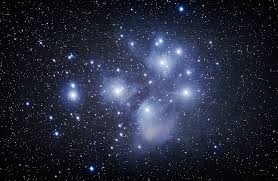 Let me start off by saying that I have never really felt any kind of connection to the ET races that have come from the Pleiades star cluster.  I am more in alignment with those from Sirius and Arcturus.  Recently, some interesting events have caused me to look further into my Pleiadian connection.

First, there was my very important interaction with the spirit of Lord Pakal at Palenque, Mexico last January.  In short, after renewing my connection with him in front of the Temple of the Inscriptions, he proceeded to open up a stargate which took me to the Pleiades star cluster.  I took a peek and came right back, as I was there with a friend, and there were other people standing in the vicinity.  You can read my post on Palenque here.  At the time, I didn’t think much of the destination, as I was much more interested in the mechanics of opening a stargate that Pakal had shown me.

However, that changed when I listened to a radio interview with author Daniella Fenton a few weeks ago.  She wrote a book entitled “Hybrid Humans: Scientific Evidence of our 800,000-Year-Old Alien Legacy”.   She also has had conscious remembrance of a past life with Lord Pakal at Palenque.  One thing that she said in the interview really drew my attention.  It was her experience that Lord Pakal, in addition to the hierarchy at Palenque at that time, were all alien-human hybrids from the Pleiades. I do not know if I was an ET hybrid in that lifetime, but Fenton believes that she was.  So now I am reading her book, and it is very interesting.

Yesterday, our group got together for our monthly launch.  I expressed my intent to find out more about my Pleiadian connections.  Coincidentally, yesterday, May 20th, fell within the date range for the alignment between the earth, the sun and the Pleiades that happens twice a year.  I did not know that until one of our launching members brought it up.  How perfect!

Upon launching, with my intent to find out more about my connection to this star system, I found myself in a laboratory of sorts, observing the creation of the frameworks for sentient beings that would be placed on a suitable planet, most likely earth.  It has been said many times that beings from the Pleiades helped seed our planet with life. Interesting that at that time eons ago, the plant kingdoms were considered sentient along with the animal kingdoms.  In other words, they all held consciousness and could openly communicate with each other.  The “creators”, myself included, were higher dimensional beings and did not embody physical forms.

I watched as the patterns for physicality were manipulated using mathematical formulas.  When a new formula was applied, the pattern or template would completely shift.  All of the myriad forms were created through divine inspiration and play.  It looked like great fun!

I then asked, what about the consciousnesses that would occupy these forms?  Where did the divas, or nature spirits come from that would enliven the forms with consciousness?  In other words, bring basic life force to the plants and animals.  The answer was also interesting. These energy forms were created in the constellation Lyra as their contribution to seeding life onto planet earth.

Upon coming back from my journey, I had a lot to reflect on.  Clearly I had a hand in creating the life forms that were brought to this planet eons ago.  It also explains my keen interest in shamanism, and communicating with the plants and animals here.  It is said that most of the native tribes of the Americas and perhaps worldwide know that they source from the Pleiades.  The Lemurians were very consciously connected to the nature kingdoms and could communicate with them easily so this society was probably the origin of shamanism as we know it today.

I expect that this is not the end to the revelations on Lord Pakal and the Pleiadians.  I am just scratching the surface here.  If more is forthcoming, I will certainly write about it! 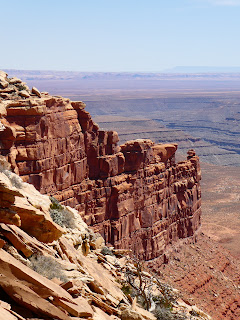 This past weekend I had the opportunity to drive over to SE Utah with some friends to do a botany field trip.  We were looking at a very unusual plant that is only located on the Cedar Mesa formation.  It's common name is Mountain Lilac.
The route took us directly west of Cortez, and through the sleepy town of Bluff, Utah.   The 2.5 hour drive culminated in a steep switchback road up the side of the mesa, past a place called Moki Dugway to a lookout called Muley Point.  Since we had climbed up over 1000 feet, the views that we experienced when we got out of the car were breathtaking to say the least!

This brings me to Tom Kenyon.  He is a sound healer who not only sends out the occasional newsletter, but also offers a free mp3 sound track to go with each newsletter’s recommended meditation exercise.  As time has gone on, his communications have gotten fewer and farther between, but the last several have been extremely significant and “meaty” in content.  I am specifically referring to the 11/12/17 e-mail entitled “Spatial Cognizance” and the most recent one from 4/3/18 entitled “The Multiverse Sound Meditation”.   Both the newsletters and the free accompanying mp3 sound meditation downloads can be gotten at www.tomkenyon.com/hathors-archives.

In these articles, Tom is teaching a meditation method by which we can connect to our spatial cognizance, expand that awareness, and thus become aware of who we are on a grand scale as a part of the multiverse. This may serve to be our salvation as we traverse further into the chaos that our world is experiencing.

Getting back to the weekend trip, upon getting to the top of Cedar Mesa, we could see for many miles out from our location, including Navajo Mountain and Monument Valley to the west, all of the mountains in the northeast corner of Arizona, and our local mountains in SW Colorado.  It was pretty exciting, even more so than the rare plant that we had come to find!  So when I do the Multiverse Sound Meditation, I frequently picture myself and also feel with gratitude and appreciation that I am in one of these great local spots where I can see for miles and miles.   Then I expand my consciousness into that space and then out as far out as I can, and eventually out into the multiverse.  At that point, I do my best to totally embody that feeling and hang onto it.  Of course, this is an encapsulated version of what Tom has written, so again, I recommend that you read his articles and try it for yourself.

Here are some of the photos from our amazing trip to Cedar Mesa.