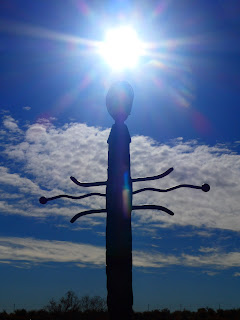 Earlier today, our group met online for our latest launching.  We had a full house today with 5 people participating.  The discussion and sharing before and after each person launches is always so very helpful to everyone.  I don't think that any of us have people in our social circles that we can dialog with in the way that we do here.

As always, before one launches, an intent must be set.  For me, I have been thinking that I should get back to some sort of meditation practice, so my intent was to be shown a location on the inner planes where I can project my consciousness during meditation.

As soon as I launched out of my body, I found myself flying over what looked like a small moon of a planet.  Everything was white, and looked like ice.  I drifted over to a very large ice cave, and thought that this was the location that I was looking for.  Not so.  I checked it out and moved on.

I ended up in a very nice and tranquil location and hovered there for a while.  I was looking at my body floating there when suddenly I started traveling into my head.  Boom!  The next thing I knew, I was scooting along on a double helix strand of my DNA!

I was in between the 2 strands and saw that there were very minute explosions happening sporadically on each strand as I went by.  My sense was that these were the existing distortions and mutations that were transforming.  Then, there were small globes of light in various places on the DNA.

As I went along, these globes became larger and larger until finally, both strands merged into one and I entered a much larger globe of light.  The DNA had transmuted from a 4 D polarity form into a 5 D unified form.

Several years ago I had written in this blog about how our 2 strand DNA would transform into a unified body of light in a higher dimensional form.  This is how we will recover our innate abilities that were lost quite a long time ago.  Specifically, I have always been interested in how our ancient ancestors were able to lighten up a multi ton stone, levitate it, carve it, and move it into place as was done with the Great Pyramid.  We were able to manifest our own food, or perhaps we didn’t need food at all.

So this unified DNA is where I will go for my meditations.  That feels very good!  I also mentioned to the group that one can travel out into outer space, or inwards into inner space.  Either way will get you where you need to go.