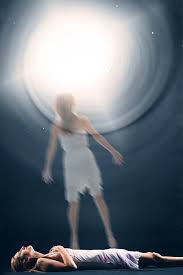 This past Saturday, I was notified that the friend with cancer that I had written about in previous posts had passed.  Every day since I had gotten word that she was now with Hospice, I had been holding space for her by expanding my Core Essence around her.

Since I am very visual, I couldn’t help but notice what was going on with her astral body and silver cord while holding space.  Each time I checked, her astral body was in a different position in relation to her physical body, with the silver cord attached.  The first I time I noticed this, it was way off to the side, standing up.  Other positions noticed were floating prone a few feet above her body, sitting on the side of the bed, curled up in a fetal position, or not separated from her body at all.  The interesting thing about these observations was that as the week went by, her astral body stayed closer and closer to her physical.  This tells me that the morphine was hindering her separation and death process.

Early on Saturday, while I was in a meditative state, I found myself facing her on her bed.  Her astral body was trying to sit up and separate from her physical with limited success.  I reassured her that I was there to help, and reached over and took both of her hands in mine.  After gently pulling and detaching her astral body from her physical, again with much love and reassurance, I opened up the portal to the light and ushered her through.  The shift in energy was palpable!  I could feel her joy and enthusiasm about finally being free of the body that had endured so much suffering in her lifetime.

Now, I am sure that I helped her, but not at the exact time of her actual death.  It feels that we were working outside of time and space, where time did not exist.  Or possibly I got her started, and her process took many more hours to complete.  This is the first time that I have assisted someone during their passing process, so I am sure it will not be the last.  I have 2 aunts still living.  One at age 92 and the other at almost age 86, so unless they go suddenly, I hope to assist them, too.