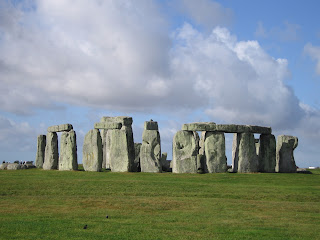 In June of 2012 I joined a small group of travelers on a sacred sites tour of the UK.  The trip was organized by Julie Gullick-Wiley.  I had been to England several times before while I was training advanced shamanic practitioners, but only briefly visited some of the sacred sites. This trip included it all, and was also designed to give us plenty of time at each location to tune in and do our own personal spiritual work.  Our group also had a mission to do energetic clean up work at sites where it was appropriate.
By far, the biggest disruption of the vortex energies was at Stonehenge.  Construction started on this massive stone circle around 2900 BC, and finished around 1800 BC, having taken place in many phases.  No doubt, it was built at the site of a powerful vortex.  There are burial mounds of chieftains dotting the horizon, and charred remains of human burials have been found right at the site.  Undoubtedly, several thousand years of ancient ceremonies had been done there until it’s abandonment around 1600 BC, and hundreds of years of a variety of ceremonies have been conducted there until the present time.

On a cold and very rainy afternoon, our group assembled to enter the center of Stonehenge by special permission.  It was by far the worst weather day of the whole trip!  As we entered the site and gathered together in the center for our work, I was mapping out the energetics of what was going on there.  I could see that the star gate, which was where the vortex came up out of the ground in the center, was taken over about 30 feet above by the Reptilians who were using it to harvest ascending souls into their synthetic reality.  There was a sensation of being grabbed by the throat as this would happen.  Unfortunately, many souls had been waylaid in this way.

The other dynamic, and the one we were there to address, was that a negative being had burrowed its way down underground into the vortex to feed on the energy and sabotage any high energy work that was being done there.  After our circle was in place and the clearing work was started, I realized that the people who were doing the work were having a bit of a hard time removing the negative being.  Shamans are well trained to deal with this sort of thing, so I jumped in to assist.
It turned out that the being was a Draconian.  I had never seen one, but knew what it was right away.  Draconians are similar to the Reptilians, but they are shorter, stockier and have numerous horns or protrusions on their face and heads, much like a short horned lizard, or horny toad.  They are one of many extraterrestrial races that are here on earth to interfere with mankind’s re-membering and spiritual progress. They are very happy to sabotage the Earth Mother's ascension, too.

It took several attempts and a bit of digging for me to remove this being.  I told him that he had no right to be there and sent him on his way.  A human in their power always can best one of these ETs!  We completed the ceremony by making sure that the Stonehenge star gate was clear.  Coincidentally, about a month after coming back from the UK trip, I encountered a Draconian in my area while hiking at around 12,000’ to a pinnacle called Lizard Head.  Coincidence?  He was also buried deep underground no doubt feeding on the energy of a vortex.  I let him be, as I knew that as soon as the Earth Mother makes her transition, he will have to go anyway.  He was quite a sad creature, so I think that he was aware of that. It makes me wonder about how many other Draconians are buried around the planet for the same purpose?