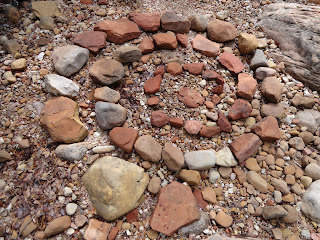 Our planet’s surface is crisscrossed all over by channels of energy called ley lines.  They are not uniformly placed like the latitude and longitude lines, but are in straight segments that connect point A to B to C, etc.  Where 2 or more of these lines intersect, the result is a high energy place called a vortex or a huaca according to the Peruvian people.  The resulting energy structure can be a sphere, tornado or vertical tube of higher dimensional energy.

These natural high energy locations can be perceived by the human senses as you walk up to and through them.  There may be a change in air temperature, vibration or sound, or you may be able to feel a “wall” of sorts that indicates that you have encountered the boundary of the vortex where the energy shifts.  In September of 2011, I met a friend in Sedona, Arizona for a few days of R & R.  As we were hiking on a trail along Oak Creek near Cathedral Rock, we came upon one of these spots.  We could each feel the shift in energy as we entered the vortex.  More amazingly, at that spot, the narrow sandy trail widened into a circle of sand that was about 10 feet in diameter.  It was also totally devoid of vegetation.  What a treasure we had stumbled upon.  We sat on the ground in meditation, and also invited curious passersby to do the same.

What is the quality of energy that causes such interesting effects?  Vortex energy vibrates at the gamma brain wave frequency, which is around 40 hertz or beats per second.  This is the same vibrational brain wave state that Tibetan monks achieve when they meditate.  When one enters a vortex, powerful changes can occur such as shifts in the DNA, healing of the physical body and all the ramifications of achieving an altered state of consciousness while there.  Intent is the most powerful tool that you can have in these places.  It creates a connection to your goal or outcome, and the energy of the vortex amplifies it.

Crop circles also fall into the vortex category.  Whether they are man made or other worldly, they are considered structures of the natural world that also vibrate to the gamma brain wave state. It is no surprise that many people will get physically ill inside a crop circle if they are not used to working with higher vibrational states.   I had the pleasure of experiencing 2 of these circles while on a sacred site trip to the UK last June.  While lying down in the center of one of them, I experienced how it was made.  My impression was that a very large disc shaped ship from the Andromeda Galaxy swooped down and created it in a flash.  They didn’t stick around, and left our solar system immediately after that.  If you are interested in seeing that crop circle, it was created on June 2, 2012 at Manton Drove, Marlborough, Wiltshire, UK.

I encourage you to fully take advantage of any vortex or huaca that you may encounter.  If there is one in your area, visit it often, as you can build upon what you had experienced the last time you were there.  One of my favorite local ones is a saddle between 2 peaks at a bit short of 12,000 feet in elevation.  If you sit in that kind of space in meditation and apply your positive intent, you just might see magic happen!