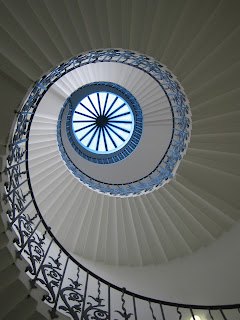 As our soul essence dropped down through the dimensions to our embodiment here, we passed through the Great Void that separates the 5th dimension from the 4th.  Once on the other side of the void, the timeless unity spherical consciousness that we experienced in the 5th dimension and above shattered into the 4th dimensional patterning of linear time, polarity and duality, black and white, and positive and negative.  Every action now has an equal and opposite reaction, every light has its shadow, and events move more or less on a linear time line.

The return path is still available to us as I have previously described in the ascension post.  It is an internal, natural progression from our connection to our core essence all the way to our eventual merging with our eternal essence.  When one is following the organic path back home, no assistance is needed from an external source, as we are all born with the knowledge on how to do this in its proper timing as determined by our higher selves.

Keep in mind that because we live in a world of polarity, there also exist many opposing paths that are called synthetic realities, or realms of the false light.  These are external paths that are self contained realities that exist entirely as structures within the 4th dimension.  Notice that I say that they are self contained, in other words, they do not take you anywhere.  These synthetic realities are structured like the energetic pyramids that I wrote about in the last post, Group Dynamics, but on a huge scale in comparison.

The synthetic realities are the macrocosm to our earthly group’s microcosm.  Within each of these is what appears to be a complete universe including everything from physical embodiments, nonphysical embodiments, spirits, a religious structure, angels and archangels, etc., and all of the dimensions culminating with a “god” figure at the top.  The big difference is that this so called path to ascension and enlightenment dead ends at the apex of the energetic pyramid with the “god” figure.

Who resides in these synthetic realities?  The list is quite a large and familiar one, and includes religious gods, deities and gurus from every tradition, the so called ascended masters, archangels, beings that have been channeled by people on earth, and representatives from many extraterrestrial races.  A living person can also be hooked into one of these realities and speak on behalf of that reality.  All of these beings are competing for your attention and energy with the promise of spiritual enlightenment, attainment of personal power and help with all kinds of issues.  What a major distraction and trap this has been for humankind for so many thousands of years.

About 20 years ago, I was a member of a spiritual group that routinely called on the “ascended” masters and archangels for energetic assistance.  In spite of this, it was an extremely dysfunctional group, and I never did see that assistance arrive.  It was at that time that I realized that these beings actually resided in the upper levels of the 4th dimension, and were indeed not ascended at all.  I had no explanation for this until I came upon George Kavassilas’ work a few years ago, and his description of the synthetic realities.   He gave words to my observations.

It seems that the commonly held theory that these beings are here to help us may be just a ploy to hook unaware humans into that being’s reality.  Yes, there might have been an actual Archangel Michael at some point in the far distant past, or he may have been an advanced extraterrestrial here for a visit.  I suspect that the being that goes by that name that so many are so fond of now is actually the group consciousness of that synthetic reality and is no longer an individual.

In this time of infinite possibilities, can we afford to go down a dead end path?  I have been lucky in my life, as organized religion and the realities that I am writing about here never held much attraction for me.  That may not be the case for you.  The antidote is to keep referencing yourself from within.  You all have everything you need to follow the organic path.  Just trust.