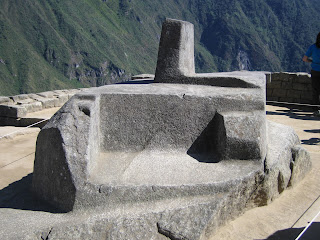 There are literally thousands of sacred sites located all over the world.  These are sites where worship and ceremony have been done for an untold number of generations.  I define a sacred site as a high energy location, or vortex that has had its location marked by a man made structure.  This structure can be anything from a standing stone, to a stone circle, a temple, chapel, pyramid or cathedral to name a few.  The veils are very thin in these places, which enabled ancient man to dialog directly with the spirits that resided there. Ceremonies were done, offerings left, and prayers were said year after year.  Some of these sacred sites have grown to be quite large, while other may be no more than a nook carved out of a basalt outcropping where offerings can be burnt.

All of the sacred sites take advantage of the energy of the vortex coming up from the ground.  The gamma vibration enhances any spiritual activity undertaken in these places.  Altered states of consciousness are more easily achieved there if one can just sit in quiet contemplation while in the rarified energy.  Guidance is received, intents are put forth, and the energy field of the human body is accelerated.  Quite often, the energy of the site can be detected well before entering it, as that energy also flows outwards on the related ley lines.  If you have a firm intent and know how to open up and receive the energy of the site you happen to be in, you can literally work the site for your benefit.

Unfortunately, there is and always has been an agenda to keep many of these sites restricted from the general public. Why do you think that religions throughout the ages have usurped these power places by building churches, mosques and temples right on top of them?  If there is a building in place, the organization in charge can just refuse admittance to all but the inner circle or those who are willing to pay more for the privilege.  We see this in Egypt all of the time.  On top of that, if another group comes to power, they simply build right on top of the structure that is already there, thus usurping the spiritual practices of the people they are conquering.  The Spanish did that throughout the Americas.

Remember that because of our existence in the realms of polarity, the energy that is emitted from the sacred sites can be used to enhance positive intents or negative ones.  Everything that is intended there can be amplified.  If you are of ill intent, your curses, spells and hexes will gain extra power if you cast them at a sacred site.  In a future post, I will talk about my experience at the Glastonbury Tor in that regard.

I do believe that there is an off planet agenda to prevent humanity from re-membering their true nature as eternal spiritual beings.  This is what runs all organized religions, as they are sourcing from the synthetic realities.  If you control the sacred sites, you can literally inject a controlling agenda into the earth at those places.  Then the programming of that agenda will flow throughout the associated ley lines and start to affect the chosen target, whether it is the earth, humanity, or a political agenda.  It is the same as hooking up an IV into a person’s vein.  From that one little spot, whatever is in the IV can flow throughout the body.  Of course, the programming will affect each according to their affinity for it, and the experiences that they need to learn.

What you will find when visiting a sacred site shifts from day to day depending on your energy and evolutionary levels, your intents and purpose for being there, the agenda that may be running through that site on that particular day, the vitality of the Earth Mother in that place, any political unrest in the vicinity or even worldwide, planetary alignments, and even the sun spot cycle.  I have traveled to the same sacred sites several times, and never know what I will find when I get there.  In the next few posts, I will write about my experiences at a few of the sacred sites in the UK.