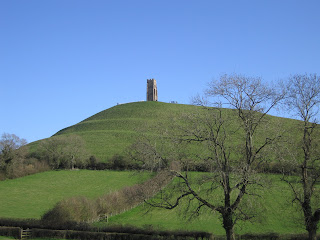 The day after our group did our work at Stonehenge, we loaded up our van and headed west to Glastonbury.  We had some amazing experiences in that area which are too numerous to write about here, as I would like to focus on the energy of the sacred site known as the Tor.

The Glastonbury Tor is a tall grass covered hill situated on the outskirts of town.  On its top is a tower that is all that remains of a church that once stood there.  Spiraling around the Tor from bottom to top is a pathway that can be walked as a labyrinth.  As that is a long and laborious way to get to the top, most people take one of several routes going straight up instead.  The Tor can be seen for miles around, and is definitely a vortex with a man made structure on the top, making it a sacred site.

I have been there twice, having had two very different impressions and experiences, and with very windy conditions both times.  The first visit was in March of 2008, and I was there with my British course sponsor Dawn.  After struggling against the wind to get to the top, we ducked into the tower to get some much needed relief.  To our surprise, there was a crew up there filming a commercial with a somewhat known British actor.

After looking around a bit, I began to feel that something was amiss with the energy.  It was kind of dark and creepy, and not due to the actor!  It turned out that there was a large black cloud made up of thousands of earth bound spirits swirling around the top of the Tor.  I had never had to deal with a group as big as that, even though sending individual earth bounds to the light is quite a routine process.  We decided to give it a try.  Dawn and I opened up a very large portal in the sky, and kept it open while we ushered all of those spirits through to the light.  It worked.

How could something like this happen?  Remember that the power of a sacred site can be harnessed for positive or negative purposes.  Earthbound spirits do not gather together like this on their own.  Some being or force had to have cast a spell that gathered those souls together to be used for negative intent.  The tower at the top of the Tor served as the “antenna” that drew them in. What that intent would be, I do not know, although I have seen the same thing happen at a chulpa, or burial tower for shamans, near Lake Titicaca.  Sorcery is very common in that part of the world.

On the other hand, my visit to the Tor last June had a totally different feeling.  As our cozy group struggled our way to the top on another very windy day, there was no sign of anything amiss up there.  The incoming energy was dynamic, clear and very masculine.  On this day, the tower at the top was  receiving strong energy from our Sun and beyond, as we were there during an active sunspot day.  The energy was directed straight down through the Tor, and radiated outwards on all of the intersecting ley lines.  This was especially evident while viewing it from a bench at the Chalice Well later in the day.

As I stood inside the tower absorbing the full force of the incoming cosmic energy, I had two intents.  The first was to send energy to all of the souls that had been waylaid at the Stonehenge stargate, helping to free them up so that they could resume their spiritual journeys.  The second intent was to use this very clear masculine energy to activate and empower my own inner divine male energy.  Most women have not had much in the way of shining examples of strong masculinity in their lives, me included.  One way to re imprint that is by working a sacred site that has this kind of energy.

So here is yet another example of never knowing what you are going to experience at a sacred site.  The key is to use your own perceptive ability when you enter the site and go with what you get.  Then work the energy in a way that is appropriate to you and the situation at hand.