Four members of our launching group met this morning for another interesting and life affirming set of launches.  As a general theme that showed up today, there seems to be a lot of moving and the changing of modes of being for everyone who participated.  I expect that we will have a lot to talk about at our next launch!

Everyone needs to have an intent for their launch so that the journey can be as productive as possible.  As I lifted up and out, I expressed my intent as “show me my next step”.  This launch was a bit unusual for me.  I expanded out pretty fast, but then ran into a clear wall with writing in white all over it.  The closest I could find is the above photo.  It is a version of Arabic.  The wall was about 5 feet high and very long from side to side, and also thin.

As I was studying the writing and trying to decipher it, the wall rolled up from one end to the other, and I was then facing a vertically oriented tube or column. The next thing I knew, that rolled up tube of writing entered me.   I proceeded upwards, and was surrounded on all sides by those symbols floating in mid air.

The next part was sort of unusual.  I then found myself traveling down and deep into the earth.  I ended up in the center right next to the Heart of our Earth Mother.  This was unusual because during these journeys, I very rarely go there.  I am more of an up and out person!

Once there, I kept expanding my Core Essence until it was as big as our planet.  It was also filled with those symbols.  I could see that the substance of our planet was being transmuted and transformed into a golden white energy from the inside out.  It seemed like she was turning into a star!  This reminded me of the “ascension” that our earth is supposed to be attaining.

At that point, I turned to the Earth Mother who was next to me, and saw the most amazing thing!  She was not in the form of a person, or even a glowing globe of light.  What I saw was a combination of sacred geometry and a view through a kaleidoscope.  The patterns were pale white, and constantly moving into various geometric figures.  The photo below gives an approximation of what I saw, but without the colors and moving all around. 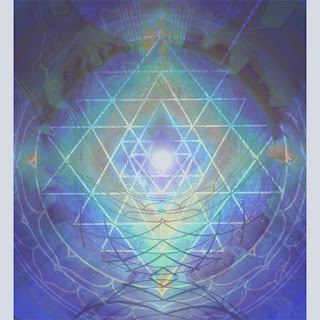 So is this the soul of our planet in her natural form?  A lot of people say that a giant crystal resides in the center of our planet.  Maybe they were tuning into this.  I sat with this energy for a while before I was called back by the group.

Along the way, I was also receiving guidance for my next step.  I need to simplify my life, and eliminate what no longer serves me.  I will probably be cutting back on my remote viewing projects in favor of more meditation time and expansion at the core of the planet, and more blog posts.  Will I be helping our planet raise her vibration and become a star?  Will that activity assist in any way to clear up all of the violence happening right now?  Will all of those symbols permeate the planet and have some kind of effect?   I don’t know.  At the very least, I think it will be a very productive way to pass time, and perhaps write about more of these experiences in doing so.  Who knows what will happen!