Ceremony in the Desert 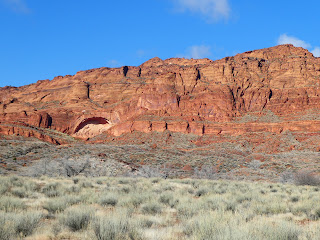 A dear friend of mine, Elz, is visiting here from the west coast for a few weeks.  Yesterday was our first opportunity to go hiking, so I took her to one of my favorite trail systems, where there are clear indications of the ancestral Puebloans that lived there many hundreds of years ago.

The trailhead is for the White Reef Trail, and it is about 30 miles south of Cedar City.   We ended up hiking on 2 additional trails in the area.

I have written about this route before, and about the big rock art panel and the other nearby ceremonial sites.  When I hiked there a few weeks ago, I really made an effort to tune in and tie all of this into an energetic ceremony that I could take people to.  Elz is the first one to partake.

The first stop was the rock art panel.  It sits high up on the White Ridge, which is a white sandstone formation.  The actual rock that the petroglyphs are located on is orangey sandstone, with a large overhang above, creating shelter from some of the elements. 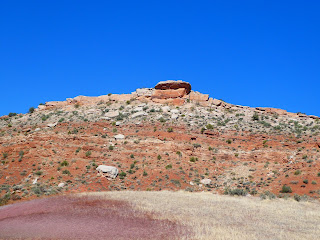 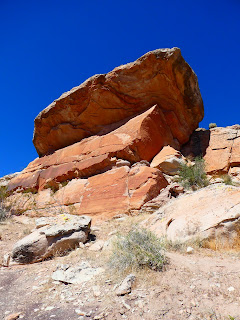 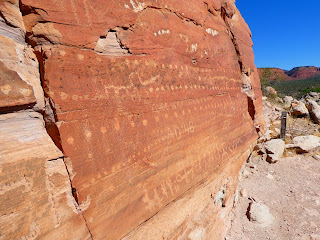 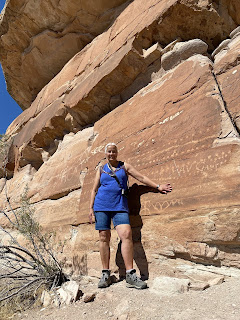 Once up there, we could see why the petroglyphs were where they were.  One can see for miles and miles north, east and south.  My impression is that this was a lookout and a signaling area to alert and attract people from the surroundings to come for a gathering.  There are some ruins of habitations in the immediate area, but not on this ridge.

After admiring the view and tuning into the energy of that place, we proceeded to climb back down onto another trail, the Leeds Reef Trail.  I have written about the sites here before, but I have now clarified the energetic impact of each one and combined them into an energetic process.  They are also located across and slightly south of the rock art panel, with a small valley in between.

The next stop yesterday was at the propped up rock with the band of caliche around it. 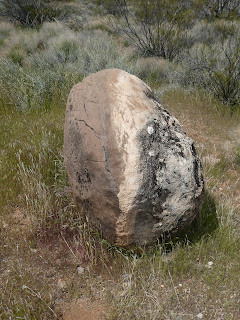 Clearly, one side (left) had been laying on the ground with the other side (right) exposed to the elements.  Who propped it up and when, it is hard to tell.  Interesting that it is the only rock like that in the whole area.  So I tuned in the last time I was there, and determined that symbolically and energetically, the side that had been in the dirt represents our unconscious shadow self, and the exposed and craggy side represents our conscious self.  The band around the middle is the limen, or the border between the two.

So Elz and I simultaneously stood at either end of the stone and put one hand on the unconscious side, and one on the conscious side.  Intents were to bring the shadow to light to be easily accessible for processing, and also to balance the dark and the light within our own energy fields.  This process felt very solid and positive.

Then on to the next site, which was an area of exposed rock surface on the ground encircled by smaller stones.  Interesting, that from this angle, it looks heart shaped.  You can see the trail to the right, so clearly it is not hidden from public view. 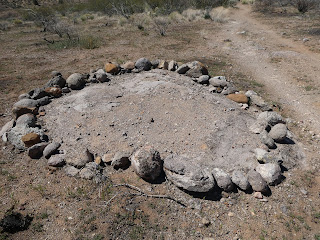 I had tracked this spot on a previous visit as having a vortex in the center that came up from inside the earth.  In addition, the energy from the sun gets drawn down from above.  This is a recharging station for the energy field.  I stepped in, and then Elz took her turn.  A feeling of clarity and higher vibrational energy was felt there.

The last location that we stopped at was where the male (right) and female (left) stones that I had discovered last year were located. 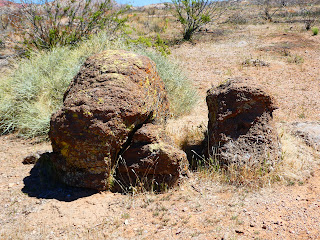 Now, I do not know if this is exactly how the ancients used these sites, but I am certain that if I am able to bring more people there to experience these rituals, that will enhance and exponentially increase the energy, and make it more potent for all.

I am also convinced that something marvelous yet subtle happened there, as I woke up this morning in the best mood ever. I joined Paul Smith's current class of remote viewing students for a field trip and lunch later in the day.  Tired but still feeling good!