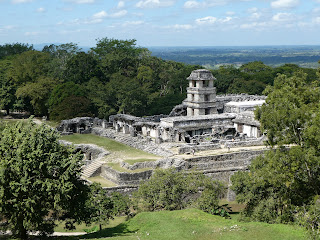 Today is Valentine’s Day, and I have the honor of writing about one of my favorite places, Palenque.  I was with a group that stayed in that area for about a week in 2010, and just loved it.  I do believe that I had a past life there, and was curious to be able to delve into that energy again.

After overnighting in Villahermosa, we got to Palenque around mid day, and spent the afternoon touring the site.  It is not as large as some other Mayan sites, but is just as impressive. 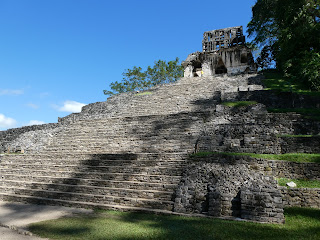 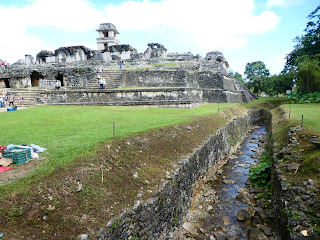 The main feature is the Temple of the Inscriptions.  This is where K’inich Janaab’ Pakal, or Lord Pakal’s sarcophagus was discovered in 1952.  He ruled for 68 years.  His is an amazing story that you can easily research. 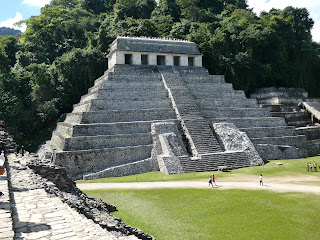 Also, when his burial was uncovered, his body with the jade mask and jade adornments was taken to the Museum of Anthropology in Mexico City.  I had heard that in the recent past, his body was re-interred in his crypt at Palenque.  The goodies remain in Mexico City for safekeeping.  The sarcophagus, for obvious reasons, could not be removed from the Temple. 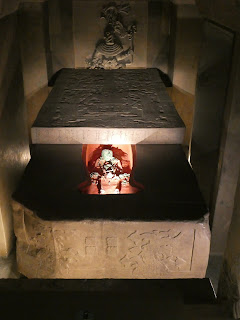 Below is the reproduction of the mask that is in the Palenque museum. 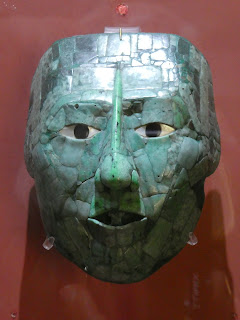 I did not track the whole site, but I did take a closer look at these stones that were lined up on one side of the Palace.  Clearly megalithic in shape and arrangement.  This is what the stones told me.  They were discovered somewhere in the nearby surrounding jungle, and hauled to Palenque.  This took quite a bit of effort to do.  The site where they were found was a small wilderness out post that served as a beacon for an off planet race that was just visiting for a short time.  It had been abandoned for several thousands of years.   They were added to the bottom of the palace as a display, and not as a part of the foundation. 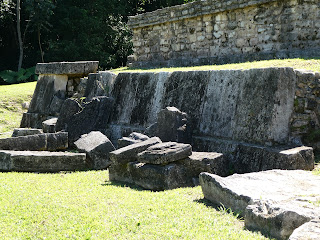 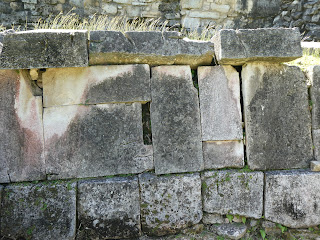 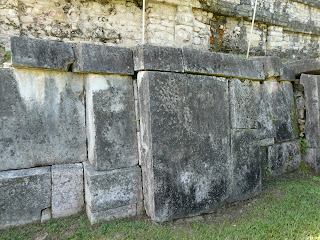 One afternoon was clearly not enough time to delve deeply into this site, and luckily, we had the next day free.  With all of the bus traveling, we all needed that!  Maxine and I chose to go back to Palenque the next day while many in our group relaxed at our hotel.  Since the next day was a Monday, there were very few people there, and it was pure delight to visit again.

My focus on the second day was to connect with Lord Pakal.  It has been quite a few years since people were allowed to climb to the top of the Temple of the Inscriptions, so one has to satisfy themselves with standing at the base.  There is also a round stone altar in front of the steps, but I am not sure if that was its original position.  Probably not. 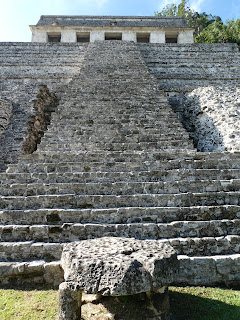 Lord Pakal’s sarcophagus is located in a chamber in the center of the pyramid, behind the outside staircase near ground level. 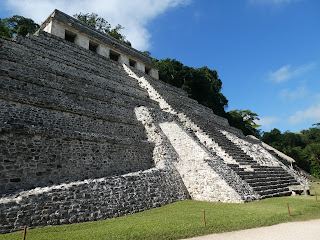 So I stood in front of the altar and the stairway, settled in, and asked to connect with Lord Pakal.  Fairly rapidly, his spirit appeared.  He welcomed me warmly as one of his soul lineage.  “Welcome sister” was what he said.  He then expanded into a stargate and allowed me to go through out into the cosmos to the stars beyond.  It looked like I was seeing the Pleiades, but I very well could have been going into the spaces between the parts of the atoms, too.   Inner or outer, it is all the same!  I expanded my energy into the stargate and just rested there a bit.

Upon coming out I encountered Pakal once again and we touched forehead to forehead in a final greeting.  It was my impression that I was alive here during his reign.  I was a female child that was about 10 years old when he died at age 80.  We would still have conversations long after he died.  I probably sat on those very steps!

After walking around to visit spots that we had not seen the day before, Maxine and I went up to the back side of a building and sat on a bench looking out at the jungle. 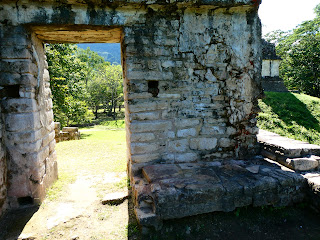 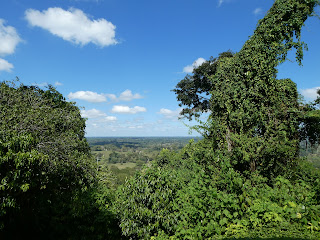 Then back to the hotel for a dip in the pool.  Lovely!