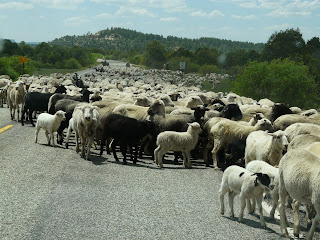 Are you the black sheep of your family, your company, or even your spiritual group?  Are you routinely criticized by others in your group, dumped on or not invited to important events?  Are you left with the tasks or jobs that no one wants to do?  More importantly, do you accept this role in life by allowing yourself to be treated badly? Do you find it difficult to speak up in self defense?  Do you even know how to do that?

Being the black sheep is an issue that has cropped up routinely with my clients over the years, and I have had a few more of them lately.  One of my clients lives on a corner lot and plants a beautiful flower garden each year.  There have been several times over the years when people have parked their cars on the street and invaded her yard, trampling her flowers, just to take some photos.  All without asking her permission.  Some of her friends, clients and even members of her meditation group have treated her in a very disrespectful manner, often in her own house no less.  I do have to say that in this case, she has made tremendous progress, but it has been slow going at times.  Incidents still crop up occasionally.

It seems that in any gathering of individuals, from 2 people on upwards, someone always takes on this role.  With 2 people, the situation is obvious.  With 3, we have the victim, perpetrator and rescuer dynamic, and the roles can rotate around.  See the post on the Toxic Triangle for more about that.  With larger groups, people tend to fall into the distorted family dynamics that they experienced as children.  See the post on Group Dynamics for more on how people in groups sort themselves out.  Spiritual groups are not immune to this patterning, either.  In the 90's, I studied with several of these groups, and the energetic goofiness with people supposedly working with the "light" were unbelievable at times.  Many times I saw the group dark side energy gathered up and used to attack someone within that same group.

There are many causes for taking on the black sheep, target on the back or bullied role, and I like to think that a soul chooses this because of the experiences and learning to be had.  I always go back to a person’s early life’s circumstances for the clues.  In large families, birth order does not have an effect on who takes on the black sheep role.  For example, I have 2 female clients who were born in the middle of 6 siblings, and because all of the previous births in their family were girls, and the parents wanted a boy, they were somehow looked upon as less than by mom and dad, right from birth.

Sometimes it’s the sibling that makes the most trouble that gets all of the grief.  Of course, there can be multiple reasons for the trouble making.  I always say that if others regard you as toxic or dysfunctional, they are more than happy to dump some more on you, assuming that you would never notice the extra heavy energy.  After all, we take our garbage to the dump, don’t we?  This is why the oddball kids end up being either bullies or bullied.  That behavior also starts within the family unit.

What about the way we treat ourselves?  We humans tend to take the critical and demeaning external voices from our childhood, and eventually, we internalize them and start treating ourselves in that manner.  Babies are not born that way, they are made.  If we remember that like attracts like, how we regard ourselves internally will attract that same behavior from others.

People cope with this role in life in many different ways.  Some become bullies in return, others retreat into isolation because of the pain.  I have dealt with many clients who give and give until they are empty and others who become supreme caretakers with the hope at least on some level, that they get the appreciation and “good for you” that they never had as children.  Both coping mechanisms generally lead to increased ill health as the person gets older, too.  That’s a good reason to do some self examination and make a change.

Unfortunately, this is a tough pattern to break, as there is a sense that everyone likes the caretaker, and that person gets at least some gratification from the distorted behavior.  Those who dump on the black sheep also feel better, as they are getting rid of their garbage.  Even the troublemaker gets attention, but generally of the negative kind.  For some, that is better than nothing.  In the next post I will write about what can be done if you are wanting to make a change in your status as a black sheep.