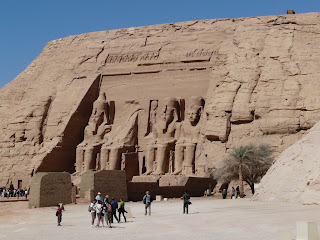 What I experienced on our visit to Abu Simbel is a classic example of how patterns and issues can be triggered and worked with while one is visiting a vortex or sacred site.  On the morning of December 5th, we left our hotel in Aswan around 3:00 AM to make the 3 hour drive down to Abu Simbel, which is very close to the border with Sudan.  I felt so comfortable with the desert landscape that we were driving through that I am sure that I have had past lives living in that kind of environment.  I had also been to Abu Simbel once before, and was really looking forward to being there again.

As many of you will remember, the temples of Ramesses II and his wife Queen Nefertari at Abu Simbel were relocated by a multinational effort when the Aswan High Dam was built in the 1960’s.  Both of these temples have a huge exterior facade and entrance, with the rest of the temple structure carved deep into a hillside.  All of this was cut up and moved upslope as the Nile Valley was flooding.  Abu Simbel is now located on the shore of the then newly created Lake Nasser.

Ramesses II ruled for approximately 67 years, and likenesses of him in temple art and huge mega-ton statues are found all over Egypt including places like Thebes, Luxor, Karnak Temple, and Luxor Temple.  A lot of the temple art depicts battles, the conquering and enslaving of people from other nations and tribes, and killing and sacrifice of all kinds.  So, we are looking at the energy of patriarchy and domination here.

We live within a model of “as above, so below”, or the macrocosm and the microcosm.  This patriarchal model has come down to us from the all controlling and all possessing “godhead” of the synthetic universe. In other words, it is part of the matrix.

As I wandered around outside and inside the Ramesses II Temple, I could feel the vibrational effects of being in the presence of a powerful vortex.  This, combined with the altered state that I was drifting into, is the best energetic state to be in for working your stuff.  The patriarchal energy came up, stimulated by the scenes of battle and violence I was looking at.  I felt the subservience and controlling energy in my body as a sort of crushing and belittling sensation.  Now don’t get me wrong, as there are also many delightful depictions of the Ancient Egyptian gods and goddesses on the walls there which can be tuned in to for a positive energy experience, but the patriarchal matrix patterning was what came up for me.

Now for the next step of what to do with the energy I was feeling.  I detected many tiny threads of energy that were hooked into my body everywhere.  There was also a good sized blob of heavy energy hovering in front of my solar plexus area.  I then went outside in the fresh air and stood overlooking Lake Nasser.  With my hands, I pulled all of the threads out of my body and merged them into the ball of heavy energy in front of my solar plexus.  Then, I compacted and combusted this ball with my hands until nothing was left of it.

For the positive integration, I went into Queen Nefertari’s Temple to soak up the pure nurturing feminine vibrations that were further enhanced by the Pachamama energy underground.  The beautiful art and symbology included some very nice depictions of goddesses Isis, Seshat, and Sekhmet, three of my favorites.   In spite of the feminine theme of this temple, all was not totally that way.  On the inside walls on either side of the entrance, there was Ramesses II again, displayed as the patriarchal conquering warrior.

It is my sense that as one gets more and more clear and after the chakra/kundalini/pineal programming is removed, one then has access to the larger scope and broader themes of the matrix programming that we are all subject to.  As each addresses issues like the one I have just described, we can contribute to the liberation and freedom of the whole of humanity.  We start doing more and more work for the collective, and not just for ourselves.