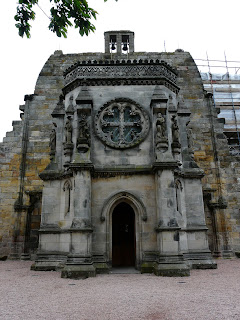 The third sacred site from the UK trip that I would like to write about is Rosslyn Chapel.  It is located near the village of Roslin which is south of Edinburgh, Scotland.  The River Eske flows nearby through a beautiful gorge called the Rosslyn Glen.  The chapel was built by William Sinclair in the mid 15th century, and was constructed on top of an older structure which was constructed on top of a vortex.  Our guide Julie called it a mega-vortex that connects to Stonehenge, Lake Titicaca and the pyramids at Giza.

On June 19th 2012, our group checked into the Original Rosslyn Hotel which was located within walking distance of the chapel.  The hotel is so small that our group of 10 occupied every room except for one.  It also sits on one of the ley lines leading out from the vortex that is under the chapel.  Imagine being in that heightened vibration for most of the next 2 days and nights!

At dinner in the hotel that night, I started feeling high and somewhat goofy, tingling and buzzing all over, and all without anything alcoholic to drink.  Our waiter connected my iPod to the restaurant’s speaker system, and we danced to my favorite dance music.  In retrospect, we needed all of the fun and motion to help move the energies that were already starting to affect us.

Before I went to bed that evening I started tracking the vortex energies and setting my intent.  The veils at the Rosslyn chapel are very thin, and were probably more so at the Summer Solstice when we were there.  There are higher dimensional beings around that vortex whose job it is to direct and deliver the incoming heightened transformational energies for all who are ready to receive.  I asked that they work with me overnight by expanding my energy field as much as possible so that I could absorb as much of that quantum light as I could.  What a night that was, with all of the vibrating and spinning!

The next day, after we got back from a trip to Edinburgh, my friend Lori and I hiked the trail along the Eske River in the Rosslyn Glen.  What a green, lush and somewhat muddy fairyland we walked through, especially in contrast to the dry southwest where I live.  I was reconnecting with my Druid heritage as we walked, and we even found a grove of ancient yew trees.  It is said that these trees were sacred to the Druids, and that they made their staffs out of yew wood.  It was my sense that the Druids had a strong connection to the star Arcturus, as do I.  It felt like a grand reconnecting was occurring as we walked.  We even found what is called the energy “generator” for the Rosslyn Chapel vortex.  It is a section of the river where the water tumbles over many small waterfalls.  The dynamic energy that is produced there must flow on a ley line that connects right into the heart of the vortex.

The actual moment of the Summer Solstice was overnight that night, and so the rocking and rolling continued.  On the morning of June 21st, we finally had our time in the chapel.  We were amazed to find out that we were the only spiritual pilgrims in the place!  The rest of the people there were tourists.

Rosslyn Chapel is covered with finely carved pink sandstone designs inside and out, and one could literally spend hours examining it all. My focus was on the actual center of the vortex, which was a high energy spot in front of the altar.  There were huge golden discs high above and deep below this spot with many smaller discs in between them, all parallel to the earth’s surface.  Energy was continuously pulsing up and down.  I don’t know if this was what usually goes on there, or if it was heightened and accelerated by the Solstice.  After more than an hour of being in that space, I started to get a bit headachy, dizzy and overloaded, so I left the chapel to take a break, eat something, and walk around before coming back for a final time of meditation.

Later, Julie asked me what I thought of my experience there and I said that the only time I had ever experienced anything like that was in the King’s Chamber of the Great Pyramid.  Wow!!!  We left that sacred place later in the afternoon to finish up our trip by spending a few days in a Tibetan Monastery.  What a perfect way to integrate all of our experiences at Rosslyn Chapel and the rest of the sacred sites that we had visited.