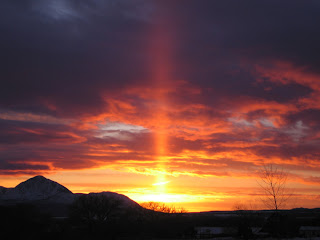 Ascension is a term that has been bandied about for longer than I can remember.  There are so many definitions for what the process of ascension actually is that it is understandable that there is much confusion around the concept.  I will explain what ascension means to me according to my experiences.

My definition of ascension is simple and clear.  When one ascends, the process starts with a merging with one’s Higher Self.  What is our Higher Self?  Everyone has one, as it is an aspect of the continuous stream of consciousness that extends from the infinite All That Is right down to the consciousness that is anchored in our physical body.  The Higher Self resides in the low 5th dimension, just over the border from our 4th dimensional field.

The Higher Self orchestrates and generates all of our incarnations.  In other words, we are living our life here in physicality according to what lessons and experiences our Higher Self determines are needed for our evolution.  My sense is that this higher aspect of ours will keep sending incarnation after incarnation into physicality until we build up enough high vibrational energy and clarity to ascend at the moment of our death.  Robert Monroe calls this “escape velocity”.  If we do not attain this state at death, we remain in the 4th dimension and start the process of preparing for our next incarnation all over again.  I myself would probably not relish the thought of coming back to planet earth for another round of trauma and drama!

Do we need to die to ascend?  There have been many stories throughout the ages of holy men whose bodies have disappeared leaving nothing more than some toe nails.  Have they ascended while still living?  Perhaps.  We may also see this happening here on earth at some point in the future, especially considering the times of rapid energetic acceleration that we now live in.

There is a definite barrier between the 4th and 5th dimensions.  To me, it feels like a skin or membrane that I have encountered many times.  George Kavassilas describes it as the Great Void.  Either way, by traversing the void or piercing the membrane, we merge with our Higher Selves. As one’s vibration, clarity, and sense of peace and well being increases, it is almost as if we are lifting through the 4th dimension and encountering the borderland that we eventually will pass through.  At the same time, the void/membrane also thins until one day we just pop through to merge with our beloved, our Higher Self.

Our linear minds view this journey as one of “onwards and upwards”, but in reality, it is an internal process.  I sense that the body’s energy field will fold in upon itself and get sucked deep into the area where the core essence is located. The Higher Self merge will then happen there internally.  What will happen to the body at that moment is anyone’s guess.  Energetically and spiritually, we will become our own Milky Way Galaxy on the micro level, and pop out the other side into an existence beyond our wildest imagining.  As amazing as this seems, this is just the start of our journey back to our eternal essence.

Ascension is the intended outcome for all of humanity, as we were never meant to ride the wheel of reincarnation forever.  On the other hand, when one ascends is entirely up to one’s Higher Self to determine.  No hurry, no worry.  Sit back and enjoy the ride!