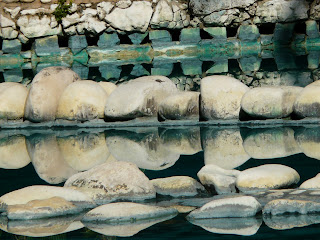 Our launching group is in the process of shifting and reformulating, and so on Solstice Sunday, we had a new combination of people participating.  In spite of that, we came together with common purpose, and the information that each brought back dovetailed nicely with the big picture that was presented.  I am always amazed at how the group’s consciousness links us all.

As always, each launchee needed a theme or intent for their journey.  To continue the mapping of the upcoming changes in the human energy field, my intent was to gather information on what happens after the DNA dissolves.  The preliminary step to this was revealed during my trip to Scotland over a year ago.  You can read about that here.

After expanding my core essence and lifting off with the help of the group, I found myself in a fairly well lit tunnel.  As I proceeded down this tunnel, I was passing a multitude of small black cubes that were strung on thin strands of gold.  Later, one member of the group likened this to the way Italian lights are wired up to be used for a holiday decoration.  Each of these black cubes had a lid, and I could see dark wormy figures popping out and back in as I went by.

It wasn’t until I saw a powerful stream of pale golden light coming towards me down the tunnel that I realized that I was looking at the master strand of DNA in the pineal gland.  This stream of energy was knocking the black boxes off of their strands.  Aha!!  The boxes represented the artificially implanted distortions and mutations that have been installed by the synthetic matrix, and that we all carry.  The powerful stream was the blast of energy that one can send from their expanded core essence, up the arm and out the palm into the pineal gland.   This is the easiest and most efficient way of clearing the distortions in the DNA.

Not only were the black boxes being knocked off of the strands, the strands themselves were being shredded into segments at the same time.  When all of the boxes had been removed, the remaining segments of DNA merged into a small orb of light.  As this point, there was no DNA left.

In a flash, this glowing orb of light popped out of the 4th dimensional arena and could be seen hovering in space above it.  That makes sense, as DNA is a 4 D structure, and the glowing orb had transformed into a 5 D energy form.  When I received the information on the DNA transformation in Scotland last year, the last step was for the glowing orb in the pineal to slide down the body’s central column and enter the 5 D energy field of the core essence, so this information was all matching up so far.

Here is where the new information came in.  This orb of glowing energy then diffused into an infinite number of glowing sparks, and spread throughout the galaxy.  It was like a very pale thin fog that permeated everything.  I found my focus of attention going from one spark to the next, staying just long enough to create or manifest something in that particular location.  This was galactic play at work, unrestricted by any controlling force like we are subject to in the 4D arena.

So the question came up as to how to return to the earthly plane on a temporary basis to assist or just to observe.  This question has come up before, and I have heard several predictions that there would be such beings coming and going to assist during the transition times.  My concern has always been about getting stuck here again.  Not to worry.  If one’s DNA is gone, one will not get trapped, and can manifest any form that is appropriate for any situation, and dissolve that form at will.  The structure of the DNA is one of the traps that keep us all here!

That was a big aha moment, and further served to emphasize the importance of clearing and purifying the DNA, as this whole process will not get going with all of those tiny black boxes still in place.

After I observed this cosmic play at work for a bit longer, I saw all of those millions of tiny sparks come back into their unified glowing orb state.   Then the orb exited through the stargate in the center of the Milky Way Galaxy, and then on through the orifice at the top of our universe and out into the multiverse.  Its experience here was finished.

As with all of my posts of this nature, this is what I call a mapping process.  More accurately, it is a re-membering process, as we have all done these sorts of things before and have that knowledge in us somewhere.  It’s like the hundredth monkey principle.  Once the information is brought out again, people will pop like popcorn with their own re-membering, and that process will gain momentum throughout humanity.  Of course not everyone will be exiting this universe at the end of their experience here.  For some, there will be different arenas to explore and different experiences to be had.  Many may even retain their DNA and end up in a place where that is still useful.  Many paths will be presented and one needs to be ready to go where they are called.   On to the next adventure!