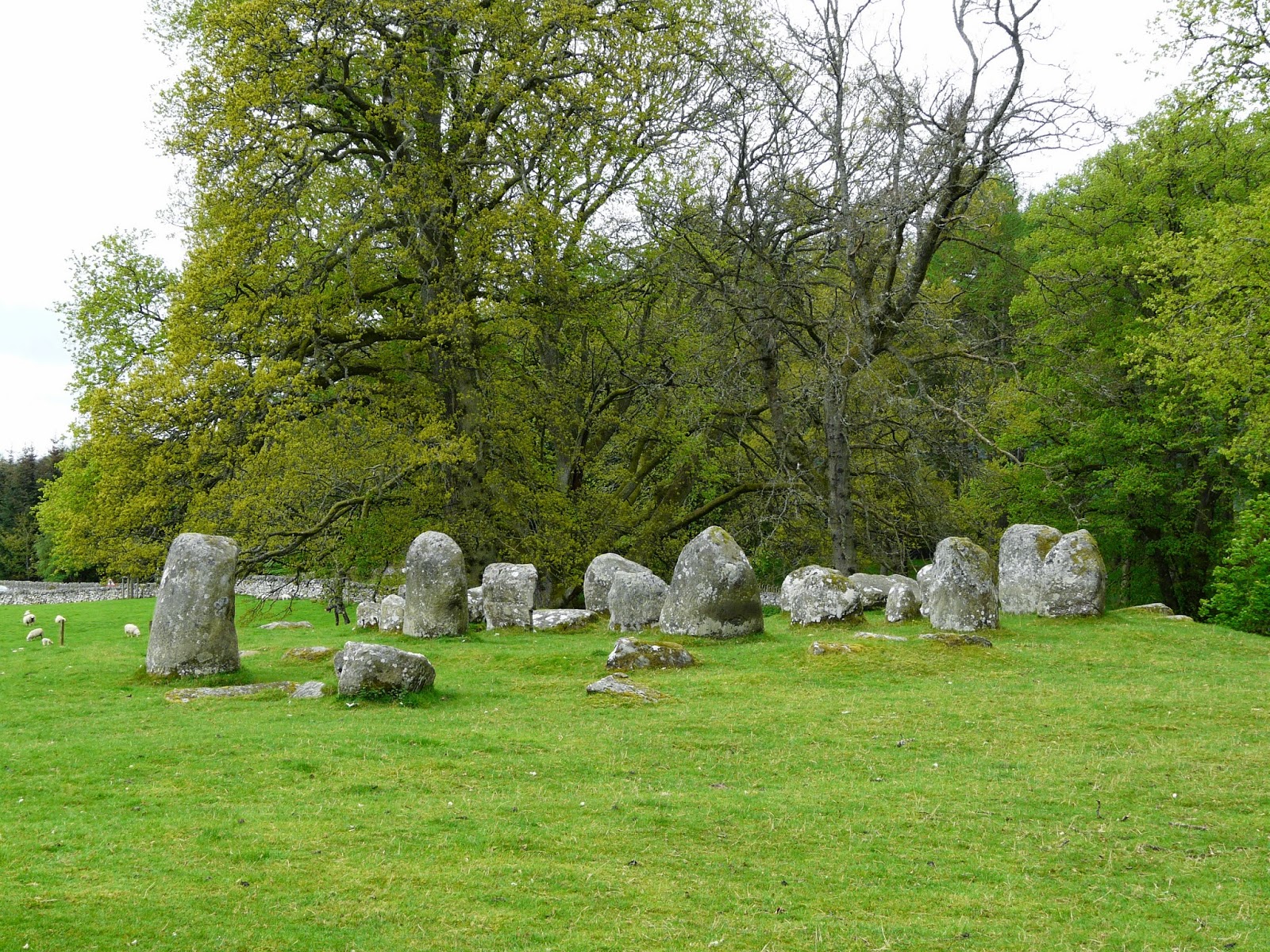 The day after our group visited the Lochbuie Stone Circle, we set out from our hotel in Pitlochry to the Field of Mary where our next stone circle awaited us.  As opposed to the day before when we had to cross a bog to get to our destination, this stone circle was right by the road with convenient parking and an easily accessible gate to go through.  We had arrived at the Croft Moraig Stone Circle.

The informational sign said that this circle was constructed in 3 phases starting about 5,000 years ago, and it was used from 3,000 to 2,000 BC.  It was situated on the top of a small hill in a very green field.  Quite a few of the monoliths had toppled over, so its appearance was not the nice neat arrangement that we had seen the day before.  There was also a bit of rock art on some of the stones.

I approached the very large “guardian” or “anchor” stone, gave it a hug and asked permission to enter the sacred space.  The deep male voice of an ancient wise one welcomed me with a “yes”.

As I made my way around the circle tuning in to each stone in turn, I was surprised to find that this was a totally different energetic as compared with the Lochbuie Stone Circle.  No one stone really stood out, and there were no individual identities here at all!  This was a true group consciousness energetic.  In addition to that, with the way that some of the stones had fallen down, a rough spiral pattern had been created, leading one from the outside of the circle to the inside in a clockwise manner.  That was pretty cool.

After spending a good deal of time wandering amongst the stones, I sat on a stone near the center point of the circle, and left my offering.  A very powerful vortex could be felt there, too.  This was truly an ancient high energy ceremonial site.

Then, the familiar spinning motion of my body started again, as if it started up again right where it left off the day before.  I knew that the combination of the powerful vortex and the spinning motion was adjusting my DNA.  As I tuned in, it seemed as if my master strand of DNA in the pineal gland was being condensed down into a single strand.  This is something that George Kavassilas has said would happen as we continue to evolve past the 4D earthly arena.

This is the process.  The ongoing clearing of the genetic distortions held in the master strand of DNA in the pineal gland facilitates going down to a single strand of DNA.  Our physical 2 strand and energetic 12 strand systems actually represent a splitting or fragmenting of this original single strand.  This puts a new light on the theories that we will be getting many more strands on top of the 12!  To me this represents further fragmentation and dropping down in vibration.

As the single strand of DNA continues to spin faster and faster, it twists down to a compressed ball of light which is no longer a strand in form.  This will be our new 5D “DNA” which represents unified consciousness, not segmented consciousness.  At this point, the whole pineal gland will erupt into a sphere of 5D light which will enable us to source from a higher level of consciousness.  A domino effect will then occur that will proceed to shift all of the DNA in the body to match the new DNA in the pineal gland. Where this will lead, I guess we have to experience it to find out!

George gives an excellent way for the continued clearing of the genetic distortions and matrix programming in the pineal gland.  You simply put the palm of one hand on your forehead and send energy from your heart core essence into your arm, up to your hand and out the palm and into the pineal.  Hold this stream of energy for as long as you are guided to do it.  If you are not particularly visual you can intend that the stream of energy from your palm meets its target, and it will.

After all of this energy and information was downloaded into me in the circle, I sat for a bit enjoying the familiar vibrating body sensations.  For me, this indicates a cellular transformation.  After all, our body is our temple and vehicle for spirit.  It needs to be a full participant in any energetic changes we experience!

Stay tuned for a final post on Rosslyn Chapel.