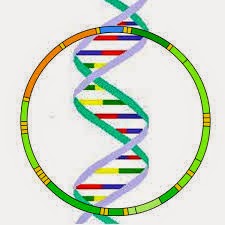 Just this past weekend I had a chance to listen to George Kavassilas’ most recent webinar from Rise  Multiversity entitled “Navigating Through the Matrix II”.  Part I is excellent, too, and I highly recommend that you listen to both of them.  In the recent webinar, George mentioned that he now differentiates between synthetic and organic DNA.  The synthetic is often referred to as nuclear DNA, and the organic is mitochondrial DNA, or mtDNA for short.  Both are structured as a double helix, but the nuclear DNA takes the form of straight segments capped at both ends with telomere, and the mtDNA forms a circle.

I have written about the master strand of the nuclear DNA that exists in the pineal gland, and also information that I received on how this DNA will be clarified, transformed and dissolved at some point in our future.  Read about that here.  The mtDNA is a different breed of animal altogether, so I decided to do a journey to investigate.  This is what I found out.

After settling in and getting into an altered state of consciousness, via my intent I found myself looking at a circle of mtDNA.  This circle then started to rotate and soon after, a portal or stargate opened up in the center of the circle.  This stargate actually grew in size and engulfed the circular mtDNA double helix.  (Later in the day I realized that once this rotating circle really got going, it took the form of a gyroscope which was rotating in all directions and eventually multidimensionally as well.)

Of course, at that point, I jumped into the newly formed stargate!  I found myself in a space that I can only describe as being in unity conscious, everywhere and everywhen, and knowing myself as “All That Is”.  It felt as if not only my physical body, but my consciousness became diffused in this space.  Really nice.

In the past few months I have become fascinated with accessing the templates of creation to be able to manifest my needs directly from those templates.  This was the perfect opportunity to investigate that.  Here are some of the hints to manifestation that I received.  The mind, heart and emotions must be used together.  I must have permission to do what I am planning.  There should be a clear and constant intent throughout the process.  I should be steady, stable and as clear as possible.  No wavering allowed!

Most importantly, gratitude and appreciation should be liberally applied.  This is a creative process of joy and cosmic play.  By creating from the position of the whole, all outcomes are valid.  Now, I would still like to manifest something like an apple, and have some ideas on how to do that.  In my last conversation with GK, he suggested that the primal matter that would adhere to and fill out the template would be provided by the Earth Mother.  Perhaps that is the energy that I detect coming up from her core when I am fully grounded and in communion with her.


After hanging out in the wonderful space on the other side of the portal, I drifted back to present time and space.  Time to get to my projects of the day, which included caulking my siding, trimming the rose bush and watering the fruit trees.  After all, the details of 3D life always need to be attended to!
Posted by Carla Fox at 10:19 AM