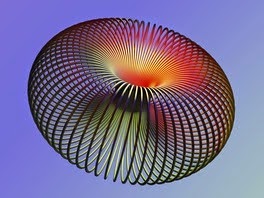 Ever since I got back from my sacred site trip to Scotland in mid-May, I have been waking up automatically much earlier than I normally do. Sometimes as early as 5:30 AM!  I attribute some of this to the early mid-summer sunrises, as I don’t close my bedroom curtains at night.

This past Friday morning was no exception.  I had set my alarm clock to get up early enough to get ready for my 8 AM client, but again, found myself waking up much earlier that that.  As I was gently coming out of dreamtime, I felt an unusual energy flow coming into my chest area.  It felt like a very light rain that was twinkling down on me and into my core essence.  That feeling was so enjoyable that I didn’t want it to stop.  It was delightful!  What I was actually feeling was the rotation of my core essence.

The core essence energy field is shaped like a torus.  Some would call it a donut with a very tiny hole in the center.  Energy rotates around the donut and into the hole, and then pops out the other side to continue rotating.  The track of the energy is an infinite pathway as it never quite repeats the same pattern as it goes around and around.

In my case, the energy flow was going into the front of the chest and out the back and around again.  Is it always this way?  My intuition tells me that it may go in this direction at night, and then reverse to go from back to front and around during the day.  When one expands their core essence, they are making the torus bigger which may affect the speed of the flow, too.

This energy field is not unique to humans.  The earth’s magnetic field has this shape, too.  Currently, the flow of energy is such that it goes into the magnetic North Pole, and out the South Pole and back around.  This directional orientation also changes when the earth experiences a magnetic pole shift.

So we see that we are the micro of the earth’s macro, and the earth is the micro of our Sun’s macro.  The Sun actually has a pole shift every 11 years or so, and it just completed its latest shift at the end of 2013.   The Milky Way Galaxy also has a toroidal energy flow.  If we go to a smaller scale, I am assuming that each atom has this same energy configuration, too.  The patterns of creation tend to repeat going up and down the size scale.

This gets us to the subject of stargates.  I have known for a long time that there are time travel portals or stargates at the 5D center of our Sun and also our planet.  These portals connect us to other solar systems, other stars, and other galaxies.  One can travel pretty quickly through the cosmos if one knows how to use these connecting points.  I am sure that there are many ET groups that do this routinely!

This brings me back to the topic at hand, which is how to use these stargates for our spiritual evolution.  Especially the one at the center of our core essence, and those at the center of the atoms that make up our bodies.  Where will we end up if we go through these personal stargates?  Some possibilities are “incension” which would be a folding into our core essence and popping out into the 5th dimension.  What about accessing 0 Point energy as George Kavassilas has indicated as a possibility?  Others that come to mind might be time travel, bi-location or dissolving of the physical form so that only the consciousness is left.

This is where we become masters of our world and free ourselves from the synthetic matrix programming.  I see all of the above as distinct possibilities.  We as the human race are standing at a major conscious shift point in our evolution.  I have heard several people who are in the know say that it will be like nothing that we have ever experienced before.  It is my goal to receive information on any of these possibilities that present themselves to me, and to pass that information along to you.  More later!
Posted by Carla Fox at 5:04 PM