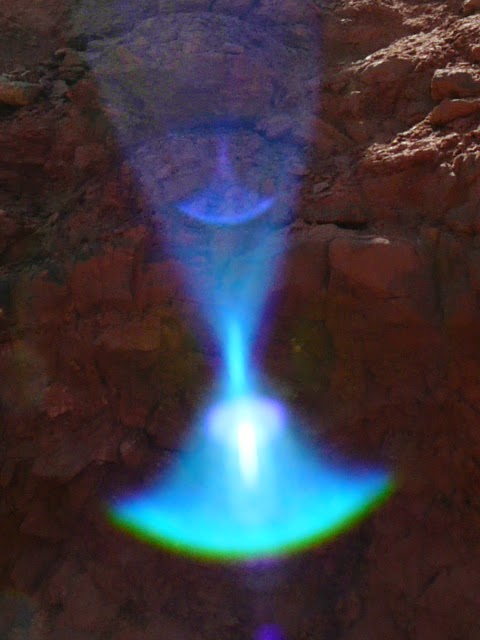 This past February I wrote a post entitled “Energy Extraction” in which I detailed how I was encountering aspects of my clients that were stuck in alternate realities.  At that point in time, I was only seeing that those aspects were being stimulated in some way and then having the resulting excess energy extracted.  The client that I wrote about was having trouble maintaining his energy levels when he was triggered by distressing events.  He would go into a downwards spiral energetically that was very hard to pull out of.  It turned out that this was the point at which his energy was being extracted in the alternate reality.

For most of the clients that I work with, I find one or more of their aspects stuck in these realities.  What is being done to that aspect always translates to an energetic dysfunction that they are experiencing in the here and now.  I call them alternate realities because I am never clear as to exactly where I am finding that aspect of my client.  Even though I ran into an ET race in the above mentioned scenario, that occurrence is extremely rare nowadays.  I may see beings or entities of some kind, but their shapes are not humanoid and in general they are very small and often numerous.  A hive structure has also come up several times.

Last week a client suggested that this may be the realm of an artificial intelligence, or AI, so I did some research on that.  Some definitions of AI are “the study and design of intelligent agents” with an intelligent agent being defined as “a system that perceives its environment and takes actions that maximizes its chances of success”.  Also, “the science and engineering of making intelligent machines”.  Close, but the machine part didn’t ring true.  Nevertheless, what is happening to people is guided by some sort of intelligence.

Then yesterday, it hit me.  I do believe that this is the realm of the “god” entity that created the synthetic matrix.  George Kavassilas calls this being a “mind” entity, as it has consciousness but no form.  It is also hard to place it in a specific location, as it permeates all of its creations.

In addition to the energy extraction predicament that I can find my client’s aspects stuck in, a variety of other scenarios are showing up as time goes by.  I have found clients aspects being experimented on, played with as if they were toys, used as garbage storage or disposal units, nibbled on like dog treats, tortured for no apparent reason and even used as building material.  I still do not see “who” is doing this, but if it is the mind entity, there would be no shape or form, just the energetic intention on its part to do this.

Sounds like a detective novel with who, what, when, where and why!  I’ve got the assumption of the who, the what that is being done, the timing of the when, somewhat of the where, and the next step would be the “why”.  My first impression is that the mind entity needs fuel or food and that we are supplying it.  A lot of the rest is a matter of a sadistic impulse that views humans as so much “less than” to be inconsequential.

This reminds me of one of my favorite movies, “Metropolis”.  It is a silent movie from the 20’s about the industrial machine that feeds the insatiable needs of the elite while destroying and feeding off of the working class at the same time.  I like the remake that features a rock music sound track.  Here are the lyrics from “Blood from a Stone” by Cycle V.

Circles of the human chain, Turning for the wheels of gain,
A system with a power of its own, To draw blood from a stone

Every hour like the last, Tomorrow like the day just passed,
Bearing down upon the flesh and bone, To draw blood from a stone

Cold machines that never stop, Even if a man should drop,
Mercy never lets her face be shown, They draw blood from a stone
Do these lyrics sound like they are describing a familiar scenario for what life on planet earth has become? We have all chosen quite a challenging package of experiences this time around.  We are testing ourselves to the max.  If we are to graduate out of the earthly 4D arena, we need to be able to overcome any difficulty that we have put in our way.

What does one do about this predicament that we are in?  Here is some repeat advice from the energy extraction post.  You can make a strong daily intent to pull back to yourself all of your aspects that   may be stuck in realities such as these.  You do not have to know exactly where they are stuck.  Just demand that they return to you.  Stay grounded and in your body at all times.  Remember that what is happening to your stuck aspect in other realities is affecting you right now.  That may give you a clue as to a specific intent for pulling those parts of yourself back to yourself.

As this theme develops further, I will write more about it.  Knowledge is power!