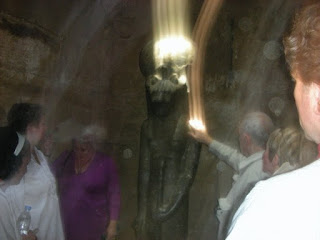 Last week I worked with a new client using the Quantum Sphere Healing protocol.  With this work, you never know what will show up and I am frequently surprised.  I suspect that what I will describe here was a result of a combination of the issue and energetics of the client and the next step in the evolution of my healership skills.

Of course, the client’s identity is confidential, and I will only be addressing a small part of what was done in her session.  Her intent was to resolve and tie up loose ends that were lingering from her interactions with a somewhat well known spiritual group.  She had been involved with this group in the 90’s, things had ended up badly, and there were some issues that were still affecting her life today.

The first interesting energetic that showed up was during the clearing of her pineal gland.  Our pineal holds all of our genetic patterning that we have inherited in addition to any distortions that have been introduced into our ancestral line. In this case, I could see that the client had numerous "attachments" hooked into her pineal gland.  These looked like tiny balloons that were floating around her head and were connected into her pineal by tiny threads.  I looked inside these balloons to see what was there, and in this case these were all people that were associated with her former spiritual group.

As the clearing work proceeded, I popped into an interesting dreamlike altered state which was highly unusual for me.  I suspected that there was also some mind control involved with this group.  As the pineal was being cleared, all of the attachments were being dissolved, too.  The really interesting part of this was that as the attachments were being dissolved, I was connecting to the many alternate aspects of each individual that had been attached to her.  I also had the feeling that she had never met some of these people in person, but that they had attached to her through her work with other individuals in this particular group.  The whole thing felt a bit surreal as I watched the clearing take place.

What would cause these attachments to be there?  We do have to remember that all is by agreement, and our plan is formulated before birth.   Either this is an unusual case of heavy entanglement on many levels of reality or more of this will start showing up in my healing practice.

Another significant part of the QSH involved a Quantum Retrieval.  My client’s Higher Self entered the synthetic reality of her former group.  Very interesting here!!!  As I followed along behind her Higher Self, I found myself once again floating through a very dream like reality.  All here seemed very light filled and pleasant on the surface, but the core of darkness and decay underneath all of that was very obvious to me.  Very creepy.  I then noticed that her Higher Self had started the retrieval by absorbing more than one aspect of her.  Normally, the Higher Self just has one aspect to retrieve.  In this case, there were multiples.

So what to make of all of this?  With both the attachment removal and the Quantum Retrieval, I was dealing with aspects of my client and the others that existed in parallel realities or alternate timelines.  Starfire Tor calls them co-existing timelines.   We all probably have many aspects that are living other lives concurrent with the one that is our present focus here on earth.
This is the key.  Our focus is here during this time of transition, evolution and the great opportunity to achieve autonomy and freedom.  It is the time of the Great Re-membering.  George Kavassilas has said that by shifting here, we will affect all of our other aspects that exist in other realities.  This does not mean that we have to sit back and wait for our shift to affect the others.  You can intend to bring back all of your various parts, no matter where they may be.  A good time to do this is before you drift off to sleep, while you are out in nature taking a walk or when you are in a meditative state.  You will find that your aspects will tend to come streaming back into your core essence.  They will bring back their energetic gifts and you will feel more whole and empowered each time this happens.  Look at it this way.  They will be joining all of the action here on Planet Earth instead of sitting on the sidelines waiting to be asked to play!
Posted by Carla Fox at 4:54 PM