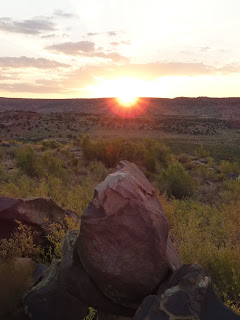 This past Tuesday morning, I was up at 3:30 AM to get on the road and over to the spot in the canyonlands of SE Utah to witness the Summer Solstice sunrise at the site that I have written about previously.  At this archeological site there is a huge monolith whose sharp upper edge is pointed in a northeast direction to the opposite horizon.  Six other people came along to witness if indeed this monolith is pointing to the place where the Summer Solstice sun rises.   Luckily, even though we were a few days past the solstice, there is at least a 5 day window to witness this event, as the movement of the sun becomes stationary before it starts its journey south to its Winter Solstice position.

As you can see from the photo above, this monolith is indeed pointed to the place where the sun rises at this time of year.  What a thrill to be standing in the very spot where the ancient inhabitants of this land did ceremony.  Of course, there is no way of knowing for certain what the theme of the ceremony was, but my sense is that the approximate date of the Summer Solstice needed to be determined in some way so that a ceremony designed to call in and ignite the annual monsoon rains could be done.  The people here were either nomadic, or in later times, agricultural dryland farmers.  If the monsoon rains failed, there would be no crops and the result would be starvation.

Solstices and equinoxes are what I would call organic time markers, as they are created through the natural cycles between the sun and the earth.  Therefore, these phenomena need no calendar to keep track of them, and a variety of methods can be used to determine their exact dates.  It was fairly easy for the ancient peoples all over the world to know when these times of year were coming up and to plan the appropriate ceremony.

For those of us in the northern hemisphere, we can do ceremony in any way that suits us, either in a group or solo.  We can use the energy of the longest day of the Summer Solstice to ignite any project or life change that we are intending.  The same goes for those in the southern hemisphere 6 months from now.  If one is on the road to separating themselves from the synthetic matrix, these are the “holidays” that should be honored, not Christmas, New Years, Easter, etc.

After we enjoyed the sunrise on Tuesday morning, we briefly went over to another site which is what my friend Virginia calls a shrine.  It is a rough stone circle to delineate the sacred space, with a very old rock art panel on one side of it.  Going by the style of the rock art, the people who created the petroglyphs did so some time between 1500 BC and 500 AD during what is called the Basketmaker II period.  Very old indeed! 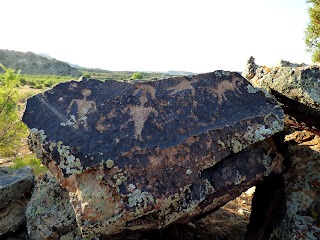 What I am describing here goes back to a time when daily life was conducted in a sacred way, and there was no separation between the physical world with its needs and wants, and the spiritual world where all possibilities exist.  We can come back to this place again, where the sacred in all is honored.  I am privileged to be able to visit so many places here where I can get a sense for how these ancient people created ceremonies that honored their place in the natural and spiritual worlds.
Posted by Carla Fox at 8:01 PM