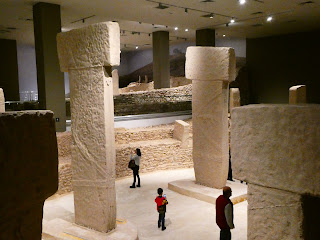 On this day, our group arrived at the long awaited highlight of our trip, the world famous Göbekli Tepe, also a UNESCO World Heritage Site.  It is considered by some to be the world’s oldest temple.  It was built and used between 9800 BC and 8600 BC, during the hunter/gatherer phase of human evolution, making it much much older than Stonehenge.  The main excavation site consists of a series of stone circles featuring massive and tall t-shaped pillars decorated with reliefs of vultures, aurochs, foxes, snakes and more in addition to humanoid forms. Above is the recreation of enclosure D with the 18 foot pillars in the Sanliurfa Museum.  There is so much to say about this place that I will refer you to the many sources on the internet, and also Andrew Collins’ book “Göbekli Tepe, Genesis of the Gods”.

The conditions that day were not ideal for photography, and I again refer you to the many high quality photos that can be found on the internet.  It had been raining that morning, and the sky was overcast.  A roof had been built over the excavations several years ago to protect the priceless ruins. 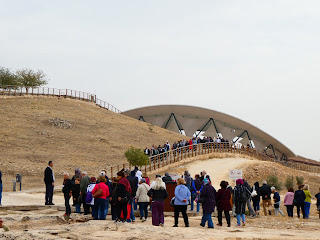 So first, here are a few of my best photos. 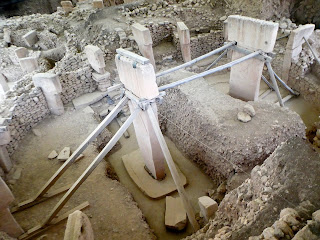 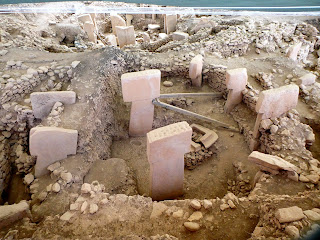 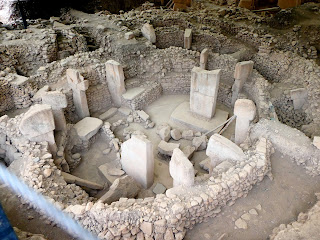 The circular enclosures with the multi ton pillars were the first and oldest stage of the construction.  Next came ever smaller enclosures with smaller pillars, and then even smaller square enclosures with very small carved stones.  That indicated to me that a devolution and even forgetting of the original patterning that created this place was taking place over time.

According to Andrew Collins and others,  the enclosures are aligned to the north with the Great Rift of the Milky Way, and the constellation of Cygnus the Swan and the star Deneb, which was the north star at the time that everything was built.  In many cultures, this is the pathway out of this earthly creation upon death.  In a previous journey during a launching, I went to that location and found that there is a stargate or portal there that leads to another universe.   I feel that it is very possible that the cosmology that is expressed here may also have come down from that universe.

Here are my energetic impressions.  Information started to download the night before we went to the site.  Gobekli Tepe was created after the cataclysm that created the mini ice age of the Younger Dryas to preserve the higher knowledge from being destroyed as well.  Part of the knowledge involved preserving the route back "home" after death, an escape route in case of another cataclysm.

Traditionally in many cultures, Cygnus is a swan.  In this case, it is a vulture.  Below is the infamous vulture stone recreated in the museum. 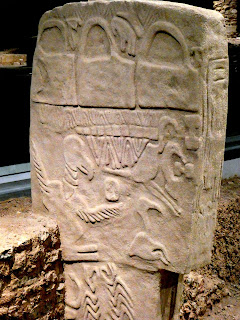 The shaman's job is to mediate between the worlds of spirit and matter, and this is also my job.  No accident that my favorite bird has always been the vulture.  As the ancient archetype of the swan or vulture, I have the ability to escort the deceased to their final destination and return again.  No surprise here that I am very interested in the death journey.

So in the morning, our group proceeded to the site.  I felt as if I was in a trance as I approached, like everything was in slow motion and I was slogging through quick sand.  There are multiple vortexes here in the various enclosures to facilitate out of body travel and also the death journey, or escape hatch from the earthly realm.  It is all very shamanic.  In fact, the whole area that is under the roof is one huge vortex.  This is not surprising since the vast majority of sacred sites on this planet have been built where there is already a lot of energy.  After looking at the rest of the excavations that were not under the roof, I ended up walking back down the hill to our bus instead of taking the transportation vehicles, just to get back into my body. That afternoon we visited the area of Harran and the beehive houses. 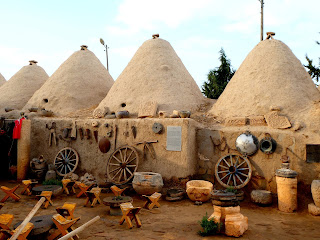 The next day a return trip was offered, but only 4 of us chose to go back to Gobekli Tepe.  I wasn't going to pass that up!  I got the same slow motion feeling, and then took the opportunity to ask some personal questions.  My concern was the dizziness that I had still been feeling from time to time, and what I got was that when I travel through a stargate, part of my consciousness does not come back right away.  The remedy is to project my whole self through the stargate, not just my consciousness.  Wow!  Feels like that is the point when I disappear completely.

Here is a photo of our excellent Turkish guide, Arda, with the man who owns the property where  Gobekli Tepe is located.  I have to say that he did an excellent job with our group.   Most of the time it was like herding cats! 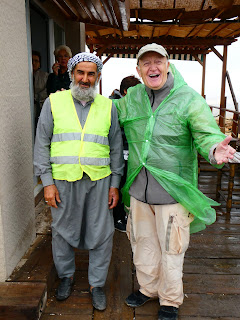 One last note.  On our first day there, we had some trouble with the head archeologist Lee Clare.  I saw a man lurking around and following the group as we looked at the enclosures.  I just figured that he was some sort of security person.  He got upset when he heard Andrew Collins explaining his take on the site to some other tourists, and demanded that he leave Gobekli Tepe and never come back.  Apparently, alternative views are not accepted by archeological academia.   A big drama erupted that continued through to the end of the trip, and is still continuing as I write this.
Posted by Carla Fox at 4:41 PM