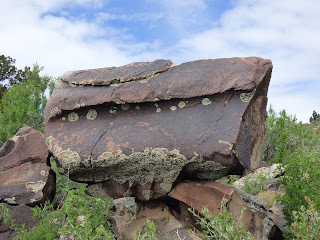 This past Sunday I took my friends Kathleen and Ann out to some of the very special sites in SE Utah that I have been visiting with another friend, Virginia, for the past several years.  The first stop we made was to the site that I wrote about in “The Latest Adventure”.  Since there are no written records about the people who occupied these archeological sites, or even how old the sites may be, other skills are needed to gather information.  With ancient stone structures or megaliths in particular, I like to put my hands on the stone and just see what impressions I can gather.  Now, even though this method may not be too scientific, I do get a lot of information.  Most of the local rock here is sandstone, which is primarily made up of quartz.  Quartz is known to be able to store and transmit information, so that a sacred activity or ceremony that has taken place in these locations season upon season, year upon year, imprints that energy on the large stones that are the anchors or focus for those ceremonies.

Gathering that information is often like peeling the layers of an onion.  You do not get all of the information right off the bat.  I had been to this first site a few weeks ago with a group of people, and was able to put my hands on the megalith there that is lined up with the Summer Solstice sunrise.  The energy of that massive stone is very masculine, dynamic and explosive.  Because I was with a group, there were distractions that prevented me from delving any deeper into the megalith’s story.

On Sunday, with just 2 others there, I was able to gather more.  It had been raining sporadically that morning, so the stone was wet.  As a recap, this stone has a very sharp ridge that runs along the top with a rounded surface on the end that is opposite to the end that points to the far horizon and the location of the solstice sunrise.  The sharp edge along the top has the energy of lightening. 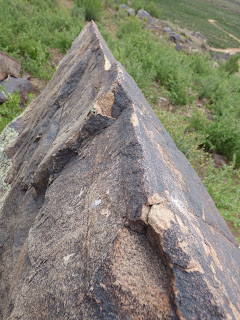 As I put my hand on the rounded end I realized that the moisture from that morning’s rain had pooled in the small craters of the roughly rounded surface.  Then it hit me.  In our area, the seasonal monsoon rains start some time after the Summer Solstice.  The crops that the ancient people planted were dry land crops and were not watered by hand.  The monsoon rains were required to bring the crops to maturity in our dry and somewhat arid climate. 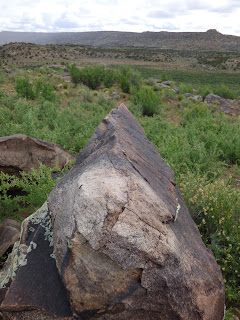 So I see the ceremony that may have been done at that location like this.  I imagine that there would be a great gathering of people for this event.  Those who were participating in the ceremony, perhaps shamans or holy people, would gather before sunrise on that longest day of the year, having been preparing for this event with fasting or meditating.  Right before the moment of sunrise, water would be poured on that rounded end of the megalith.  At sunrise, a stream of light beaming over from the opposite horizon would travel down the sharp upper edge of the megalith like lightening and ignite the water that had been poured on the back end of the stone.  The sacred space for this would be held with great honor and reverence.  The goal would be to ignite the seasonal monsoons so as to water the crops and promote abundance and fertility for the tribe or clan.

This is where we come to the act of communing with nature.   These ancient people knew how to do this.  Imagine living a life where you were in direct communication with the plants, animals and all of the forces of nature like wind and rain.  In a world like this, there would be no scarcity or lack, as the nature kingdoms would be worked with as allies in the creative process for the benefit of all sentient beings on this planet.

I encourage all of you to develop some sort of relationship with the natural kingdoms.  Spend time outdoors every day.  Appreciate and have gratitude for what our Earth Mother has provided for us.  Be quiet and listen.  As I write this it is evening here.  The frogs on my neighbor’s pond are singing away.  What a delight.  I will write more about the second location that we visited in my next post.  It was equally as magical as the first!
Posted by Carla Fox at 8:49 PM