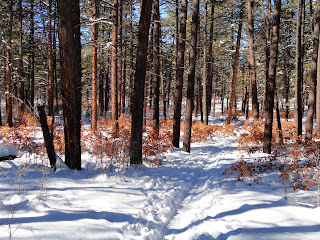 What a surprise on Friday morning to wake up to a foot of new snow.  It feels like we have had more snow this winter than the previous 3 years combined, and certainly a lot earlier in the season, too.  I usually shovel my driveway out myself, but this time I called on a friend to help, since I needed to get out on Saturday.  Today was a gorgeous sunny and cold winter day, so I went snowshoeing; hence the topic for today’s post on getting into the zone.

When one participates in certain activities, especially outside, it is easy to get into an altered state of consciousness.  I am talking about the theta state, which is 4 to 7 beats per second.  All shamanic journeying is done in this state, whether induced by drumming, rattling, dancing or a musical beat.  You can also get into this zone while walking, jogging, cross country skiing, snowshoeing, or even riding a horse.  It even can happen while driving your car.  We’ve all had the experience of zoning out behind the wheel only to find ourselves several miles down the road with no recollection of the scenery we’ve passed!

When in the theta brain wave state out in nature, it is easy to just let your mind wander to any topic you wish to investigate and gather information about.  The doorway to the subconscious can open to reveal previously hidden information if you have an intent to track something.  I have done some of my most fruitful information gathering and even processing while outside in this state.

Today, out of curiosity, I decided to investigate the consciousness of snow.  Now, most people are aware of the consciousness of other aspects of the natural world like birds, trees, flowers, squirrels and rabbits, etc, but overlook the fact that the natural elements such as wind, rain, clouds, and even snow have a type of consciousness, too.  For example, the Peruvian shamans have a name for the spirit of the wind, wayra, and that spirit can be communicated with.  If I am doing an outside activity and getting too warm and would like a breeze to cool me off, I call on wayra to assist.

I found the consciousness of snow to be very joyful.  No wonder children and dogs love to play in it!  (And a lot of adults, too.)  It sparkles in the sun and is so uplifting to look at.  Even though we define snow with a word that is a singular noun, snow is actually composed of multitudes of teeny tiny consciousnesses in the form of snowflakes.  Each one is different in their physical form.  They are so much alike in consciousness, however, that they easily merge into a cohesive energetic group.  Not so with we humans on planet earth.  We are all so different in every way that this kind of cohesiveness is not possible here.

When there is no snow, these consciousnesses do not dissolve.  Instead, they remain in their 4th dimensional form ready to drop down into a 3 D physical form when needed.  The mineral kingdom plays its part in supplying the template and materials in the form of water and other minerals so that the snow flake consciousnesses can take physical form.  I also caught a glimpse of a very old man with a hoarfrosted beard that must play a part in this winter wonderland.  I labeled him “Old Man Winter”.  There are other forces of nature at play here, too, but I suspect that the spirit of winter orchestrates the whole season and then retreats further into the mountains before finally going into hibernation come spring.

So the next time you are outside, no matter what season, get going in some sort of rhythmic activity that puts your brain waves into theta.  Then intend and open up to whatever information or messages await you.  Again, this could be from the nature kingdoms or even your Higher Self assisting you in bringing an issue to your awareness.  In the next two “Tools for Transition” workshops that I will be doing for Rise Multiversity, we will be covering some ways in which you can process what comes up.  Speaking of the next workshop on January 16th, the energetic container has already shown up for the group, and I am working it!