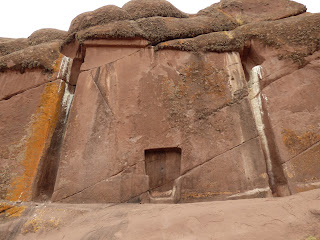 After spending 2 nights and another interesting energetic day in Copacabana, our work with healing and uniting the male and female energies was complete.  We then headed off to cross the border into Peru and our destination of Puno.  Before getting into Puno, we visited the sacred site of Amaru Meru.  It is called the Gate of the Gods, and is a very ancient stargate and interdimensional doorway.  It is located about a mile from the shore of Lake Titicaca in an area of unusual red rock formations.

When we arrived, it appeared that this stargate was partially closed and not fully functional, so as a group, we did some repair work to bring it on line again.  Apparently, the energetic quality of this stargate is not steady all of the time, as it ebbs and flow throughout the year.  We each made an offering of red and white flower petals as we entered the sacred space as a way of maintaining a balance between the giving and receiving.  Each person then had a chance to sit in this doorway and receive the imprinting of patterning and codes while also connecting with the energy that they had been working with in the last few days. 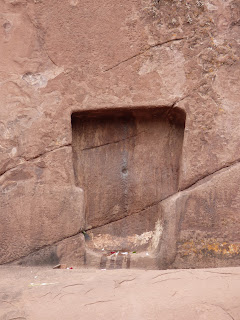 When I tuned into the stargate as the first few people were sitting in the doorway, I started connecting with the energetic lineage of beings that resided there.  I was drawn back through time and dimension, and thus labeling this a lineage of interdimensional stargate travelers that could journey outside of time and space.  They were androgynous in nature and were perfectly balanced. 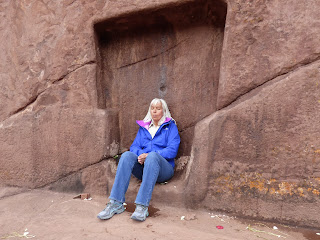 Upon taking my turn sitting in the doorway, I realized that this marked not only a shift in the energetics of the trip for the group as a whole, but also for me personally in reaching a new turning point in my skills, abilities, and spiritual life in general.  By embodying the energetic patterns that were now entering my heart through my back leaning up against the wall, I was re-membering more of my abilities of being able to travel in this way.  This would include instantaneous travel to any destination, even off planet, multidimensional travel, being in many places at once, shifting the space-time continuum, slowing or accelerating time, and having a greater access to the quantum field.  This would benefit my clients as well.  I set my intent to absorb and embody as much of this lineage as possible.

It hit me that some of this was already happening on the trip with the simultaneous viewing of energetic imprints of a particular location that were coming from different sources, dimensions and time lines.  Like that multi-level chess game!  Now the challenge would be to be able to choose and maintain a focus into one or even several scenarios simultaneously.  If you have seen the movie “Inception”, then you know what I mean.  We are becoming multidimensional beings after all!

After everyone was finished with their time in the stargate, we sat for a bit just enjoying this unique spot.  Then back on the bus and off to Puno for a very unusual evening ahead!