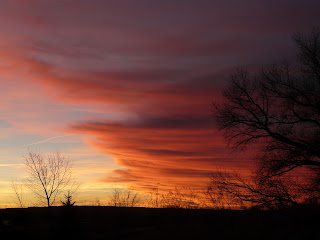 I don’t know what else to call it.  A few days ago I woke up to the feeling of absolute dread.  It’s the feeling that something huge and awful is heading my way, and there is no way to stop it. I am falling down into a bottomless pit with no hope of rescue. The apocalypse is imminent, and we are all going to be annihilated in short order.  This sounds sort of dramatic, but it is the best way to explain the sensations I feel when this happens.

To this day, I do not know what causes the arrival of the mood. Of course, nothing dire and drastic proceeds to happen in my immediate vicinity, but that doesn’t mean that nothing has happened somewhere else. Luckily, these occurrences have gotten rarer with time, and last a shorter amount of time.  When I first noticed the mood happening, it could last a few days off and on, especially if it was in the dark of the winter months.

You may or may not experience this, or have not up until now but may in the future.  Your experience could also be different from mine.  It does not matter if you know where this heavy energy is coming from unless it happens often and you’d like to get to the bottom of it.  I always recommend starting with the self before going out any further to find a cause.  You may be carrying energetic patterns for deep depression, for example.  Or have recently ingested something that did not agree with you.  Perhaps you have taken on some heavy energy from a friend or loved one.  Tracking back to what you were doing just before the mood descended may help find the origin.  If one of these is the cause, take measures to remedy the situation.  The clearer you are energetically, the more likely the cause is something outside of your self.

If the cause is not immediate to you, you could be tuning into a planetary disaster in the making, an earthquake or volcano erupting, or even an emergency situation happening to someone close to you. Many people are sensitive to earthquakes, although the symptoms may not be what I have described.  What about something happening within our solar system?  A CME erupting or an asteroid passing too close to the planet perhaps.

We also all carry the genetic memory of disasters and extinction events that happened to our ancestors.  Barbara Hand Clow writes about this in her book “Catastrophobia”, where she talks about the events that happened to our planet between 15,000 and 11,000 years ago.  The wooly mammoths were frozen in their tracks up in the tundra, and Clovis man was wiped off of the face of the earth during that time.  When the mood arrives, has our genetic remembrance of that time been triggered?  This also explains why apocalypse themes have been popular from time to time for many centuries.

Let’s get crazy for a minute.  What if every so often a big wave of particularly negative thought forms gets sent out from the matrix just to throw us off balance?  Some people may not feel it, some may recover just fine, but some may be thrown over the edge into insanity. What a way to keep the population on their toes!

What to do when the mood pops up and brings you down?  As I have never been able to pinpoint a cause, I just deal with the energy.  A few days ago, I sat with it for a while.  When that started getting a bit creepy, I expanded my core essence to raise my vibration, and returned to my normal state.  I can see how someone could get addicted to sitting in that energy, but that isn’t the healthiest thing to do. If we suddenly hear of many people having these sensations, then we will really know that something is coming down the pike for all of us.  Stay tuned!
Posted by Carla Fox at 3:46 PM