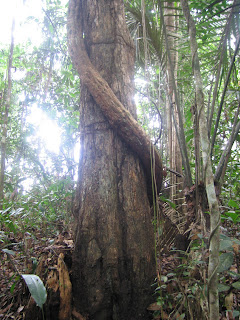 I am finally able to get back to the posts about my experiences at the Monroe Institute.  I had left off with the post entitled Death, describing the focus levels that one can end up in after they make their final transition out of the body.  Today, I’d like to write about the class called Exploration 27, or X27 for short, which deals with Focus 27.  Students in these classes have the opportunity to share their experiences after most of the exercises, but I did not do so for several reasons.   I am very visual, and see and retain the details of each exercise, but in this case, others were having a hard time just doing that, and I did not want to overlay my  experience onto theirs in case they were going to be receiving more information later on.  Secondly, what I experienced was so different from what is the norm in Focus 27 that it would have been too far outside of the other student’s parameters of belief, and would seem frightening to them, or even nonsensical.  So except for 1 or 2 people, all of you are the first to hear about this.

During one of the first exercises of the week, I got a message that humanity would experience a Diaspora, or a scattering of people away from their homeland.  I saw masses of people wandering like zombies.  I was not given a time frame for this, and I am not sure if this is on our planet, or a disbursing of souls off of the planet.

We then had an opportunity to explore more of Focus 27.  As previously explained in the post on death, this is the level where one comes to prepare to come back for their next incarnation. This is quite a complicated place.  According to Robert Monroe, it is a creation of our mass consciousness.  At the time of his death in 1995, this whole dimensional reality hadn’t been mapped out fully, and more is being added all the time.  There is a Reception area where new arrivals are welcomed.  Those who still need healing are redirected to the Healing and Rejuvenation Center. There is a park where one can stroll and meet others, and library type buildings and an Education center where information can be accessed and specific training can be received.  A building called TMI There connects TMI on earth with levels still higher than Focus 27.

All this is orchestrated and held in place by what are called the “Coordinating Intelligences”.  This is where things started to get a bit bizarre. Notice that they are not labeled as humans!  During one particular exercise, we were guided to go to where these intelligences were located. The room that they were in was circular with windows all around, and with human looking beings sitting at control monitors.  This structure was located above the surface of Focus 27.  The top of the room was connected to a big tube that continued upwards, and out if this tube came some very large octopus like tentacles that were draped around the room.  Creepy!  I backed up and took a bigger view of what was going on, and saw that Focus 27 was actually a big floating island with the tube going upwards to a huge space station, and some sort of tube or chute going back down to earth.  Around this floating island were many smaller ships helping to maintain its position.  Now you know why I didn’t speak up in class!

I had a chat with the Coordinating Intelligences, and they said that this system had developed over time. After the human form was created, various ET races wanted to come here to experience earth as a sort of Garden of Eden vacation spot.  My sense is that they occupied the human bodies that were here.  After all, aren’t we all from someplace else?  Over time, souls got trapped here, the recycling system came into play, and the whole operation became very mechanical.  The beings sitting at the monitors are in charge of making vibrational adjustments when distortions start to creep in.  In addition to maintaining the way station where souls enter the earth arena, they keep the patterns of form (or the matrix) in place.  The up line for all of this is the huge space station that is at the top of the tube, but I will address that in the next post.

So I have to wonder if this was a purely organic system until it was taken over at some point by beings from the synthetic creation, or was it always a synthetic matrix that we certainly agreed to be stuck in for a time.  Yes, we did choose this for the experience, and yes, we are currently working our way out of that system.

The other aspect of Focus 27 that I’d like to address is the Planning Center.  This is your final stop before you reincarnate, and there seem to be endless meetings and evaluations to be done before this happens.  This is also where you meet with your “team” of souls and helpers to plan out your next lifetime.  As I said in the Death post, there is no where to go but back to earth from Focus 27, or the shamanic realm of the people.   Interestingly enough, there was a door marked "Exit" that one goes through to slide down the chute into the waiting baby body.  I was offered the opportunity to check it out twice during the exercises in class, but never did get around to doing  that.  I am assuming that I will not need the chute at the end of this lifetime, as I will not be coming back!

At this point, I was convinced that I was looking at the synthetic reality matrix at work.  In the planning center, I saw a biomachine that looked like an airport security scanner.  As the soul made its way through, experiences and knowledge gained from the previous lifetime was harvested and directed into a huge supercomputer.  Thus, all of the experiences that the soul brought back to Focus 27 could be read, analyzed and processed.  During that particular exercise, we were also directed to receive an idea that we could bring back with us. These new concepts were injected into the soul’s patterning.   I saw how people reincarnating would bring back these ideas and introduce them to the human mass consciousness.  All of this would be benign if the new patterning were coming from our inner guidance instead of from an external source.  More on what the nature of this external source is will also be written about in the next post.

So we see how our “goodies” are harvested, and in turn, more matrix programming is injected with each incarnation.  This goes a long way in explaining the speeding up of the distortion and compression that we are experiencing.  More people reincarnating faster, thus an ever increasing population, resulting in more matrix programming being applied faster.  The whole process is moving along exponentially.

I do want to emphasize that the workshops at the Monroe Institute do not collude with or create this programming.  They just provide a forum for students to experience what they experience via the use of alerted states of consciousness.  I know that Robert Monroe was very aware of the presence of extraterrestrials in our environment, but he probably didn’t connect the dots to the synthetic matrix!