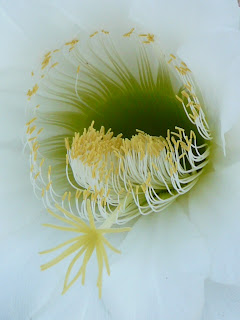 In this final post on the events from the Exploration 27 class at the Monroe Institute, I’d like to describe Focus 34/35, which Robert Monroe called “The Gathering”.  It is a point of convergence of beings from nearby energy systems that have gathered to witness the conflux of several different and intense energy fields that will arrive at an intersection of time and space.  This is an extremely rare event, and will create the birth of a new energy that we have never seen before. I have also heard this from several other sources that is will be something that we have no reference point for.

These beings have gathered to see what will happen to those in the earth arena when these energies arrive here.  I have been told by one of the facilitators at TMI that this event has not yet happened, and there is no time frame on when it will happen, although our current acceleration and the rate of distortion of our reality may indicate that it is approaching.  If you would like to read more about this, please reference Monroe’s book “Far Journeys”. Focus 34/35 is also considered to be the place where our souls go when we graduate the earth school.

First, let me describe what I saw when we were guided up to this level of consciousness during the class journey.  As you will recall from the previous post entitled X27, I referenced a space station that was floating above Focus 27 and the location where the Coordinating Intelligences were located.  The whole set-up looked a bit like the Seattle Space Needle.  There was a central tube that went from the surface of Focus 27, through the room where the Coordinating Intelligences were located, and up to a multi-level type structure with rooms and corridors that made up the main body of the space station. Above this was a cluster of nipple-like structures that were feeding tubes, and on the very top was an antenna.  Quite a place.  Energy was pulsing up and down the central tube, and smaller ships were refueling from the feeding tubes or just hovering around the whole thing.  I can only assume that the energy for the feeding tubes was being siphoned from the human levels below.

On the space station were many races of extraterrestrials, and very few humans.  I saw what looked like men in black, and other humans who would be called the elite of earth.  I am not sure if the humans were there in their physical form, or in some sort of energy representation.  There were a lot of meetings going on, plans being made, and a fair amount of arguing and deal making.  Their expectation was that when the “event” finally took place, the human race would disburse, and each race wanted to get their piece of the pie.  Guess what—we are that pie!

I could also see that the Coordinating Intelligences were doing just that, coordinating.  They were taking orders from those on Focus 34/35, and were not really in charge of anything.  In turn, the various beings on the space station were taking their orders from their planetary governments, and they were just the ambassadors.

I projected myself onto the space station and walked around a bit, but felt very uncomfortable as if I were the alien!  Ha!  I then went onto one of the ships floating nearby to talk to the commander.  He was very human looking with blond hair and blue eyes, and even though he kept looking at me strangely, at least he was willing to talk to me.  This is what he said in answer to my questions.

Even though we humans were supposed to be graduating from the earth school, only a very tiny proportion has done so up until now.  That is why there were very few "non-official” looking humans on the station.  Graduation has become more difficult as time has passed because of the heavy negativity, distractions and barriers to spiritual evolution that exist on our planet.  This situation would be much worse if not for the positive ET races that occasionally intervene, but for the most part, the negative agenda ET’s have been in control for a very long time.  He then showed me a true prison planet which was heavily polluted and very dark.  It reminded me of the “Escape from New York” movie.

When earth makes her transition, it will be a free for all grab bag situation, with every race harvesting what they can.  Very crazy business.  (I have to interject here that this sounds like the synthetic realities that people may find themselves in.)  All the races are on the alert for the event, are very apprehensive, and are making deals and negotiations ahead of time.  He then looked at me and said that he was sure that I wouldn’t end up in this place, but was clueless as to where I would end up when the time came.  At that point, we were called back from the exercise.  It was a good thing, since there was a lot of information to take in, and I needed to process a bit.

The next exercise we took part in gave everyone a chance to go back to Focus 34/35 and continue their explorations.  I proceeded back to the vicinity of the space station, and saw all of the communication conduits going from it out into space to the various ET home worlds.  This is how the ambassadors were getting their instructions.  I then noticed a thick membrane some distance above this whole set up, and launched myself up and through it to end up in a pure and golden realm.  My heart opened up and I merged with a higher aspect of myself.

More information came in.  The event that is heading our way will shift the energy of the earth, but not the gathering at Focus 34/35.  The beings there will take advantage of the turmoil to harvest as many of us as they can before the space station dissolves, as there will no longer be a need for it after this is all finished. Earth reality in the 3rd and 4th dimensions will also dissolve. The way to avoid being caught up in the turmoil is to keep your connection with your core essence solid and strong, maintain contact with your higher self, and do not to engage in the drama.  It cannot be fixed or even stopped.  Remember, this is why we humans are all here at this time in our evolutionary history.  I would also suspect that having a strong and vibrant escape velocity would be very helpful, too.  That way, if you choose, you can shoot up, pierce that bubble, and watch all of the action from above.

I attended this class at TMI in September of 2011, so keep in mind that some of this information might have changed, such as the harvesting information.  I do feel that the event that Monroe spoke of will still happen, as many other sources are referencing a huge shift in consciousness coming up in the future.  Our future has already happened, and it is driving the changes that we experience in the present moment.  So no hurry, no worry. Just go with the flow, and you will get where you are intended to go.
Posted by Carla Fox at 5:05 PM