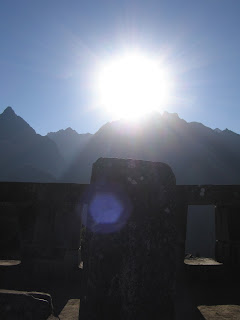 There is a stream of energy that comes from the center of the Milky Way Galaxy, to and through our Sun, and to the center of our Earth.  Some Mayans call this the Serpent Rope.  Apparently, they have been aware of this stream for many hundreds of years.  The source of this energy is beyond our galaxy and is a consciousness greater than what we can conceive of.  Clearly this consciousness has a plan.

What is the reason for the Serpent Rope’s existence?  It is to deliver the conscious energy that guides and directs our spiritual evolution and ascension.  Our planet is unique in that it condenses the macrocosm of life in this universe into a microcosm of space.  No wonder we humans have such trouble getting along.  The amount of diversity here does not exist any place else.

One of the jobs of our Sun is to deliver this conscious energy in the form of coronal mass ejections, plasma bursts and electromagnetic storms.  The current sun spot cycle has been pretty active, and we haven’t even reached the peak of this solar cycle, which will be later in 2013.

The effect on our Earth is the warming of the planet.  As her molten core heats up, this heat is transferred to the surface creating weather anomalies of all sorts.  The other planets in our solar system have also experienced the effects of this.  Most people do not know that the polar ice caps on Mars have been melting for several years now.

If you look at the interaction occurring between our Father Sun and Mother Earth, we see the Sun passing on this cosmic energy to the core of the Earth to accelerate her transition and re-birthing into a higher form.

This means that all of the nature kingdoms including humanity are being affected, too.  This is why we have all chosen to be here on Earth at this time.  We are here to experience the pressure cooker of over population, violent weather patterns, looming financial collapse, political unrest, electromagnetic overload, pollution of the planet, domination by big pharma, the banksters and the corpocracy to name a few.  This will push people to their breaking point, and there will be a great many that will choose to exit the earthly plain ahead of the transition.  The good news is that those who can ride out the changes ahead will reap the rewards of popping through into a new paradigm.  Big shifts always come from catastrophic events.

Remember that the human form is the microcosm to Mother Earth’s macrocosm.  What affects her energetically also affects us on a smaller scale.  The next time you are outside on a sunny day, turn to our Father Sun, thank him with appreciation and gratitude, and receive his gift of higher dimensional energy into every cell of your body.  The incoming energy may kick up some hidden issues that are ready to be released, but will also energize you and propel you to a higher state of being.