As I write this, we are still within the 5 day window of the Summer Solstice.  What a marvelous weekend this has been!  First of all, my student/client and friend, Lindsay, came over from Denver to participate in all of the planned activities.  She has a high pressure job and was looking forward to having some down time.  I know that she was not disappointed!

On Friday night, I hosted my annual Summer Solstice shamanic fire ceremony here at my house.  Even though about half of the participants were new to this kind of activity, the group merged seamlessly and rattled and chanted as one.  That doesn’t always happen!  The weather forecast called for windy and rainy conditions, so I did my shaman’s best and worked with the weather before the ceremony started.  The wind died down, and except for very few sprinkles at the start, we were dry and comfortable.  Once we really got going, a pillar of higher dimensional energy was sent straight up from the fire into the sky.  To my surprise, a return flow came from above and down upon all of us.  I directed everyone to soak it up like a sponge!  Right now, I can still feel that energy.  It was very powerful.

Yesterday, Saturday, I planned a hike for Lindsay.  Since she lives in Denver, she does not get that kind of activity very often.  My friend Kathleen came along, too.  We were originally going to go northeast into the mountains, but the weather forecast called for blustery winds and big rain, so we went to plan B, which was to go west over to Bluff, Utah, and hike to the Procession Panel instead.  Normally, the temps would be in the mid to high 90’s in Bluff this time of year, but because of the cold front moving through, we only hit the high 70’s.  Very unusual!  So we experienced a day with a slight breeze, no bugs, and no other hikers.  There were plenty of wildflowers to enjoy, too.  At the top of this post is a panoramic photo of the rock art panel.  I have also written about it several times in this blog if you would like to look back on previous posts.

Briefly, the main feature of this panel is a circle with 4 streams of “people” going into it. 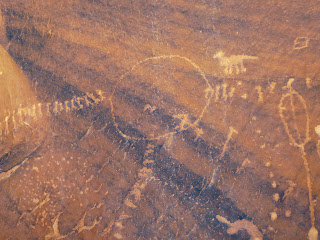 All of the animals and other figures on either side of this circle and below it are facing it, and thus will end up in there as well.  My interpretation of this probably does not match up with the archeological explanation, as I prefer the spiritual/ shamanic view.  I also like to put my hand on any rock art, stone structure, or megalith to tune into the energy that is imprinted into the rock, thus gathering information.  Since the circle is up fairly high, I was barely able to get my hand into the lower part of the circle.  Lindsay is taller than I am, and she had better luck.  Here she is below. 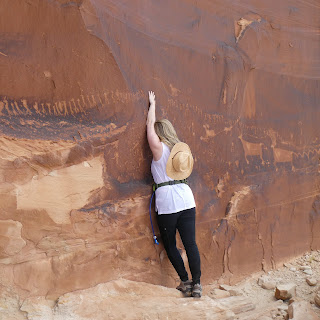 When I tuned in, I was propelled down a corkscrew tunnel or worm hole, to a vast energy field of pale golden light.  I was absorbed into this field, becoming totally one with it.  No identity, no imprints, just unity with that energy.  Then, all kinds of energy started being flung out from this golden field.  My interpretation, we all end up there eventually to be absorbed and recycled into primal matter to start the creative process all over again.   When Lindsay tuned in, she got the word “graduation”.  Cool!  Was this what the creator of this fabulous rock art panel depicting?  We may never know, but it should be acknowledged that these ancient people and shamans may have known more than we do about traveling in the realms beyond the physical.  I think that this rock art was depicting a star gate.

Our day in Bluff was topped off by a very interesting visit to the Bluff Visitor’s Center and a mid afternoon lunch at the Twin Rocks Café.  A delightful day all around.

To finish up the weekend, we had a launch here at my house on Sunday morning, with Lindsay also participating. Even though everyone chooses their own intent for their launch, and they are always different from each other, most of us today got information related to dropping any baggage or heavy energy that we are carrying so that we can complete our journey back to Source when the time is right.

My intent was to further investigate the energy of the previously day’s rock art star gate.  Once I was launched, I rapidly passed through a zone of energy where there were a lot of 4th dimensional patterns and energy flows.  Not a place where one wants to linger.  Upon approaching and entering that familiar golden field of energy, I ran smack into a golden wall.  Wow!!  On the surface of this wall was a pinpoint opening where a brilliant white light was shining through. This opening was too small for me to go through, so I applied gratitude and appreciation to get it to melt and widen.  That worked!

As soon as I penetrated the wall though the once tiny opening, I became red hot lava that was flowing everywhere.  Talk about primal energy!  The last impression before being called back was of floating above a planet that was covered with green grass and trees.  My launching experience dovetails with the experience the day before.  When our time in this reality is complete, we merge with the “All That Is” clean and clear only to be recycled and returned to another place and time to start the process all over from scratch.  We are certainly infinite beings having a myriad of infinite experiences.

Now off to bed after a very busy, full and elevating weekend.  Hope most of you had a great solstice weekend, too.
Posted by Carla Fox at 8:26 PM