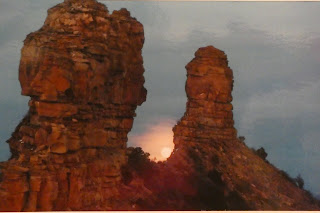 I returned home last Friday after an 8 day trip which included joining an all women’s group for hiking in Rocky Mountain National Park, which is north of Denver, Colorado.  This was a road trip by car, and an opportunity to see parts of Colorado that I had not visited before.  All in all, I put over 1100 miles on my car!  Once I got to the park, however, all of the food, transportation and lodging were taken care of as part of my tour.

The first stop on my 3 day pre hike meandering was to the Chimney Rock National Monument, which is located on a high mesa near the Piedra River west of Pagosa Springs in southwest Colorado. Tours here are run by volunteers and there are only a few each day.  It is a strictly managed archeological site.  This is a place that I had passed by many times before, but never had the opportunity to visit.

The Ancestral Puebloans lived in this area for hundreds of years before abandoning it altogether around 1125 AD.  There are about 8 villages consisting of pit houses that were used for habitations, and a number of large kivas that were used for ceremonial purposes.  Below are photos of the kivas. 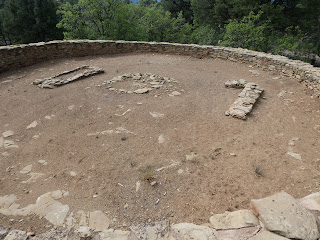 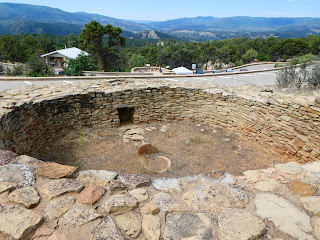 All of this is situated at fairly high elevations, so the pit houses were built with very thick walls to protect the inhabitants from the harsh winter and hot summer weather.  Below are photos of the reconstructed ruins of one of these.  A domed roof made of wood and mud would have completed the structure. 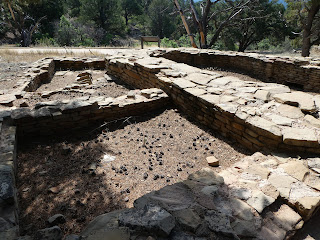 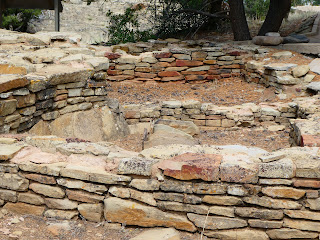 The highlights of this area are two rock pillars, Chimney Rock (rear) and Companion Rock (in front), that are located high up on a very narrow mesa, and can be seen for miles around.  Here is where the archeoastronomy comes in.  From certain locations in the area, the sun can be seen rising between the pillars on the mornings of the spring and fall equinoxes.
There is also a phenomenon called the Lunar Standstill that can be observed at moon rise in the same manner.  Our moon goes through a 18.6 year cycle as far as where it rises and sets on the horizon before repeating the same pattern.  The photo at the top of the page was taken during a recent Major Lunar Standstill, when the moon rose at its northernmost point in this cycle.

This leads me to the most prominent ruin of this whole area.  After our volunteer guide led us through the ruins of the pit houses in the village below, we climbed up a somewhat steep and rocky path on the narrow spine of the mesa to a very different ruin called a Chacoan Great House.  At 7620 feet in elevation, this is the closest that we could get to the rock pillars. 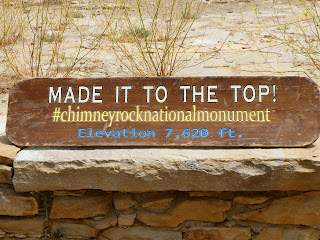 The complex building below was constructed between 1076 and 1093 AD, only to be abandoned by 1125.  Who built it?  It is uncertain if this site was connected to Chaco Canyon in NW New Mexico by one of the Chacoan roads that radiated out from that huge complex.  Perhaps people went back and forth between those locations.  Perhaps also the Ancestral Puebloans who were living at Chimney Rock recognized the importance of the archeoastronomy of that place, and wanted to build a grand building to commemorate that in the style of the Chaco Canyon society. 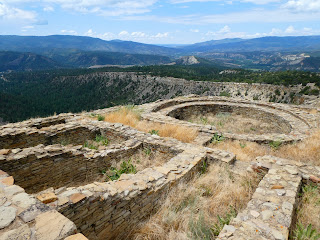 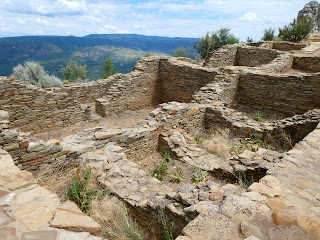 In fact, if one stands on the ruins of the Chimney Rock Great House in a certain spot, the moon can be seen to rise between the rock pillars during the Major Lunar Standstill. In it's original state, the Great House rose about 20 feet above the mesa floor. 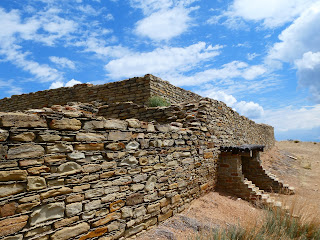 Below is a photo of the Rocky Mountain Bee Plant that was taken at the Chimney Rock parking lot below the ruins.  It was the secret ingredient that was combined with ground up hematite to create the black pigment that was used on the ancient pottery. 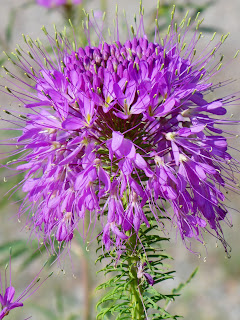 After a perfectly delightful morning at Chimney Rock, I proceeded to drive east and then north through the San Luis Valley to Salida where I was to spend 2 nights on my way to Rocky Mountain National Park.
Posted by Carla Fox at 7:31 PM