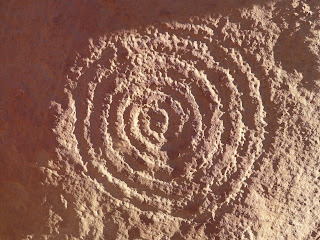 On Wednesday night, I had a group of people here for a shamanic fire ceremony.  The ceremony took its usual form with one addition.  Since we have been in a fairly severe drought here, with 2 pretty large forest fires still burning after several weeks, we added an exercise involving calling in the annual monsoon rains.  It is still a bit early for their arrival, so our hope was that we could speed that up a bit.  It was a lovely clear and balmy evening that was enjoyed by all.

The next day, on Thursday, I was able to participate in a field trip of sorts down to the Ute Mountain Ute Tribal Park to observe 2 different Summer Solstice sunset solar alignments in action.  The ancestral Puebloans of this area made use of natural features of rock combined with their rock art to mark the solstice and equinox sunrises and sunsets as a way of keeping track of those dates.  We are talking about dates from more or less 1000 BC to about 1200 AD.  By going to these sites during these times of the year, we can in part participate in the energy of the ceremonies that were performed those many years ago.

The vast majority of sites in the Tribal Park are for the Winter Solstice, which is considered to be the most sacred of dates, and the start of the New Year.  I have been to Summer Solstice sites in other locations for the sunset and sunrise, and my impression was that the ceremony that was done there was for  calling in the monsoon rains, as all of the crops that the ancient Puebloans planted were dry land crops and relied on the mid summer rain  to come to fruition.

Below are photos of the first site that we visited last night.  It featured a beam of light that was created by the sunset light entering a space between 2 boulders, and then elongating across the ground and creeping up the front of a giant boulder to rest in a pecked depression as the sun went down.  Since we were also heading to another site, our group did not wait to see the completion of that phenomenon.  Below are some photos. 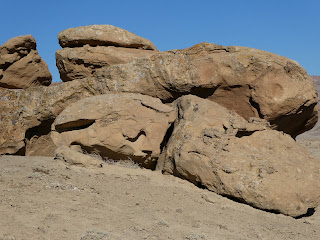 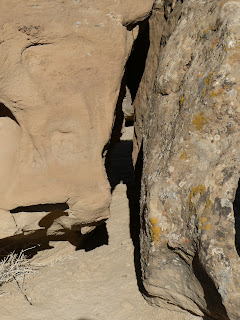 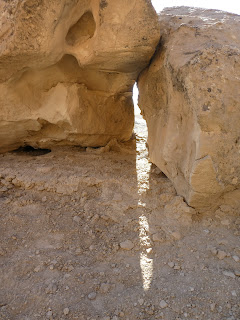 Our main destination consisted of 2 very large boulders with at least 7 pecked spirals on them.  These were apparently there to mark the location of the good stuff further up the slope. 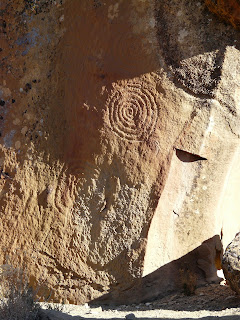 Next, we visited a hollowed out boulder that had a doorway built into it.  As the sun was setting, its light went directly through the doorway and lit up the back wall of this shrine.  Undoubtedly, there were sacred items in there, and it was probably sealed up during the rest of the year. 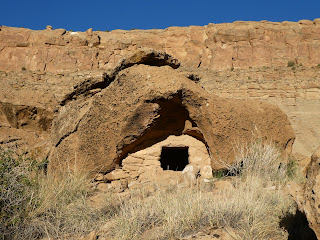 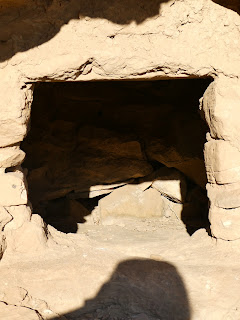 Just up slope from the shrine was another solstice site.  It consisted of a large boulder that we call the clam shell because it cracked in half leaving a flat surface where a spiral had been carved.  We had visited this site many times before to see if a solar alignment was happening in relation to that spiral, but it seems to be yet another marker indicating that something else was going on here. 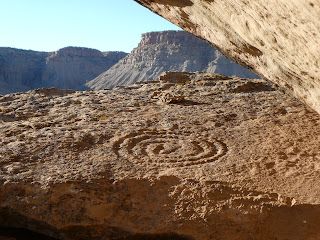 It turns out that when the sun sets on the Summer Solstice, a beam of light passes under this boulder and comes out the back side into a circular enclosure.  Another shrine! 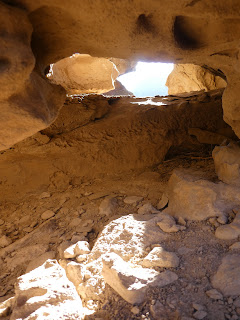 Our group relaxed in the glow of the setting sun, some sitting in contemplation, some meditating, others chatting. 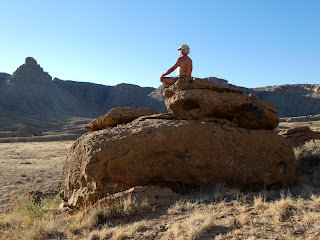 The sun appeared to slide down the side of a far away cliff face and into a notch before disappearing altogether.  One has to wonder what went on here those many hundreds of years ago.  Undoubtedly, it was something significant and sacred.  It was our honor to be able to participate in some small way. 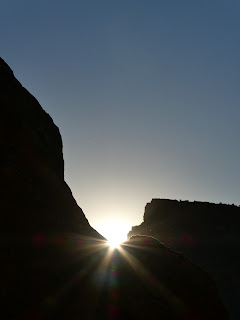