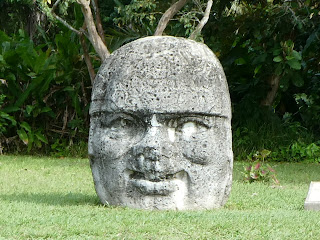 We were now heading into Olmec country.  The Olmecs lived in the south central tropical lowlands of the states of Veracruz and Tabasco from about 1500 BC to 400 BC.  There are many questions about who they really were, especially since the colossal basalt heads that have been unearthed have features resembling people from Africa or the Pacific.  Smaller statues and jade artifacts have a distinct Chinese look.  It is also currently believed that the Mayan long count calendar actually originated with the Olmecs.

All of the Olmec sites have been discovered and pretty thoroughly excavated.  These people were expert at using basalt to create huge multi ton sculptures.  17 of the colossal heads have been removed and put into museums for safe keeping, leaving exact reproductions in their place.  Nevertheless, it is still nice to visit one of these sites to get a feel for these ancient people. 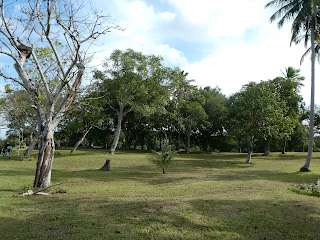 After leaving the delightful city of Puebla, our group made its way to the Olmec site of La Venta.  This was clearly a different ecosystem than the volcanic mountains we had just left.  It was mostly flat, green and wet!  La Venta covers about 500 acres and is considered to be the first planned city of monumental architecture in Mesoamerica. 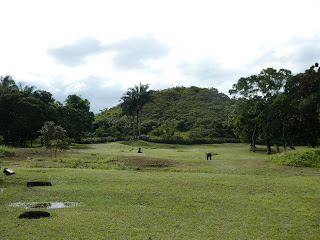 There were reproductions of the artifacts that had been found there and were randomly placed around the property. 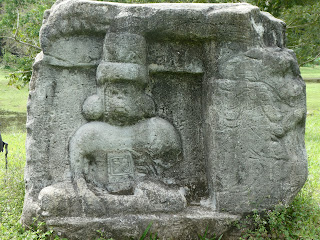 Below shows the area of basaltic columns that were lying on the ground with reproductions of 3 colossal heads behind them.  We were told that the heads were placed facing the opposite direction from how they were found, all for the benefit of the tourists, no doubt! 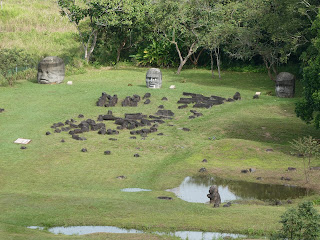 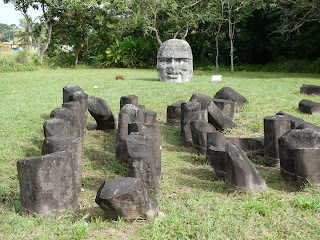 As we wandered around and also climbed up the big hill, these were my impressions. 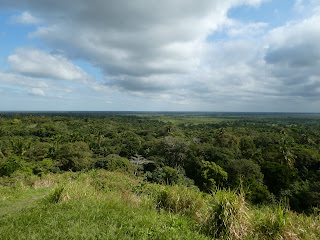 The energy here was very old, gentle and shamanic!!! These people were at one with the nature kingdoms, more so than at any other site on this whole trip.  No human sacrifices were detected, and offerings were made of fruit, flowers, smoke and incense at the sacred altars that they used.  The energetic center of the site was where the basaltic columns had fallen down.  I sensed some sort of roof on that original structure.

The top of the big hill seemed to be the location for astronomical observations and perhaps ceremonies for the solstice and equinox. I sensed no separation between the priesthood and the people.  All in all, this place held a very soft and harmonious energy.  In the next post I will show some of the colossal heads, carvings and artifacts that have been removed from the various Olmec sites. 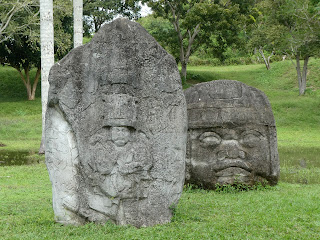