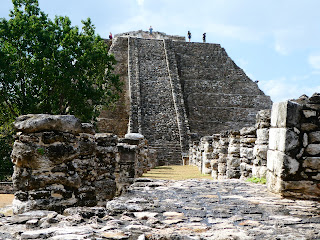 The site of Mayapan was the last big city of the Mayan civilization.  After Chichen Itza declined, the walled city of Mayapan was built as a smaller version of its former capital, and was the Mayan capitol for about 200 years before its final abandonment in 1441.

Once again at this site, there were only a few people other than our group walking around.  The area that has been cleared and restored is fairly small, but there were quite a few interesting features to be explored.  Its main temple, the Temple of Kukulcan, is a smaller version of the large one at Chichen Itza, complete, I am assuming, with the serpent of light that goes down the side of the staircase during the equinoxes.  There is a platform in front of that pyramid. 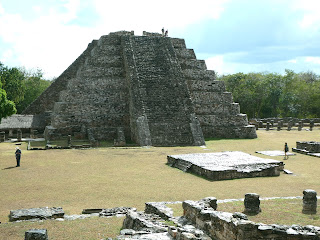 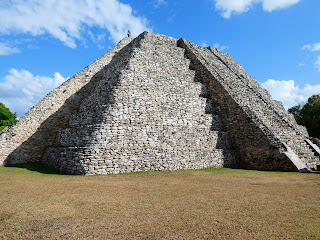 Next, we have what looks like an observatory, again a smaller version of the one at Chichen Itza.

Archeologists call this the Temple Redondo. 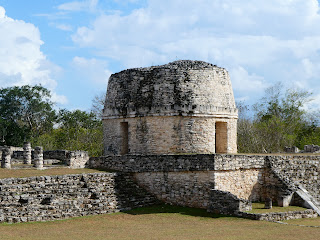 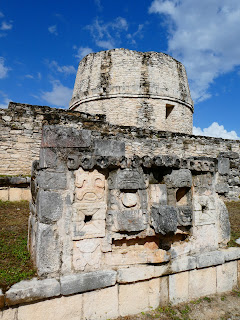 Now, this is hard to describe.  When you walk through one of the doorways into the observatory, you are in a circular hallway that goes around the outer wall on the inside.  The central pillar has 4 niches evenly spaced.  Three are inset into the pillar, and the 4th had a locked gate on it, ostensibly being the entrance to the stairway that leads to the top of the structure.   The pillar goes straight up and then flares out to meet the outer wall, to accommodate this stairway inside of it. 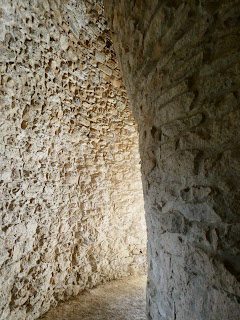 What were they doing up there?  Stargazing perhaps?

There was a cenote behind the observatory.  A cenote is a limestone sinkhole filled with water.  Since drinking water seems to have been an issue for most of the sites on the Yucatan peninsula, having a cenote on the property was very important. We visited the cenote below after our trip to Chichen Itza the next day.  Clearly it was a big attraction for  swimmers of all ages! 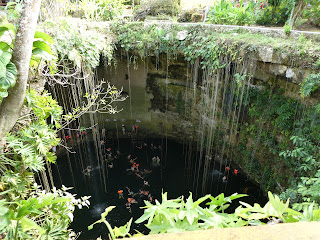 In the plaza in front of the main pyramid were 4 curved lines of stone that I found fascinating. 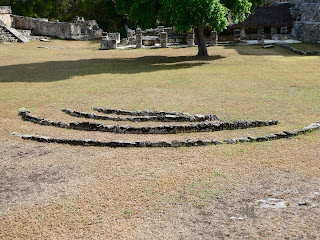 They faced to the south, and did not look like they were the remains of the foundation of a building.  I asked my inner guidance about that.  What if one were to put some sort of pole in the ground in front of them?  You would end up with a sundial for telling the time!

There were several sets of columns where complete buildings had once stood.  These probably held up thatched roofs. 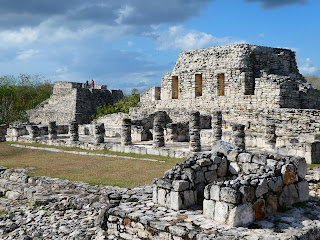 The other very interesting features were near the smaller pyramid on the site. 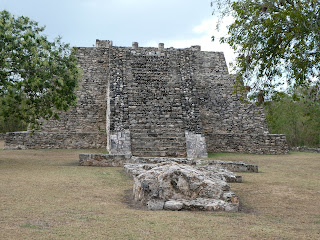 First there was a monolith with what looked like a water feature carved out on its top. 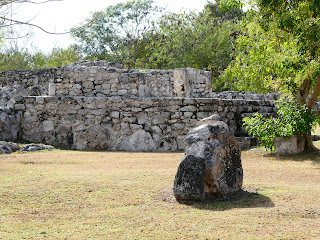 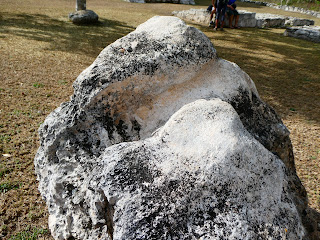 Then we have right in front of the pyramid’s stairway, two circular stone structures. 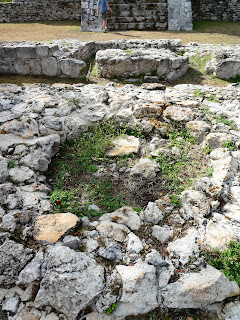 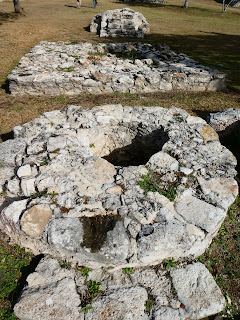 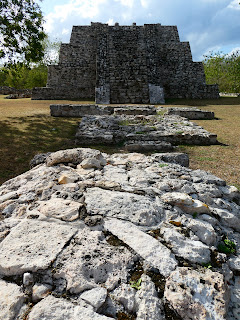 Farther beyond that is an altar platform.  It all lines up with the stairway and the monolith is off to one side.  This was clearly another kind of ceremonial space at the site.  I am guessing that these outlined spaces or pools were probably filled with water for the ceremonies. 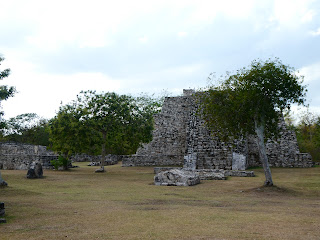 All in all, a very interesting site.  When I tapped into the energy here, it was all about science, measurements, and figuring things out.  This was the last site that we would visit where there were no crowds.  Then we were off to the very crowded sites of Chichen Itza and Tulum to finish off our trip.