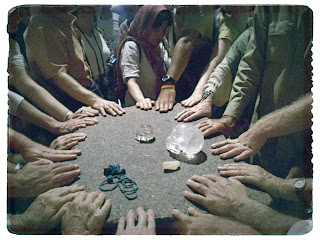 I would like to subtitle this post “Multiple Earths”.  This is what happened today.  I woke up this morning well before the launchers arrived, and decided to lay in bed for about a half hour listening to my Hemi-Sync® Meditation CD.  I didn’t yet have a theme for my launch, and wanted to see what showed up when I was in a nicely relaxed and altered state.   When I asked to be shown what my intent for the launching should be, I was shown a view of planet earth.  Slightly behind and off to the side and in shadow was another planet earth.  Streaming away from this second earth was a whole line up of earths going back as far as the eye could see.  Now I had a topic for my launching!

The following is a summary of the 2 journeys that I took.  Upon lifting off and looking back at the earth, I noticed that there were more earths than just the lineup that I saw a few hours ago.  In fact, more and more earths were appearing out of nowhere so that my whole field of vision was filled with them!  They were popping up like popcorn.  My interpretation of this intuitively is that each earth represented a different timeline, so if you were to jump to an alternate timeline, you would literally be on a different version of earth.

What was stimulating the creation of all of these timelines/earths?  It was energy coming from the sun, in other words, solar winds.  So I next traveled into the center of our sun.  Every planet, sun, or galaxy has a portal at its center through which one can travel to other stars, planets and galaxies.  The center of our sun is quite a busy place, and there are also beings there that are running this portal.  I detected different streams of energy going out to various destinations, and even took the one leading out to the star Arcturus to check things out.  There was one big difference between Arcturus and our sun at their cores where the portals are.  Our sun has an additional stream coming into it which was stimulating the creation of all of the timeline/earths, whereas, Arcturus did not have that happening.  That tells me that we are in a very unique situation here.

The next step was to follow the stream of energy that was coming into our sun.  That led me to what I can only call an “intelligent machine”.  Its only job was to create energy particles at a very rapid pace.  It had no goal or agenda other than to create.  I even merged with it for a bit, and again felt that rapid popcorn popping sensation.  I then asked about the energy that was streaming out of our sun, and the answer I got was that consciousnesses that were between the machine and our sun were taking the energy particles and applying their intent to them for a specific purpose.  OK.  Clearly there is a consciousness that is directing all of the time line action, but what the purpose for all of this is, I did not find out today.

After coming back from the intelligent machine and into the center of our sun, I then used that portal to travel into the center of our earth to talk to our Earth Mother.  She is very aware of what has been happening!  It is interesting that her focus of attention is right here and right now, and not on all of those other earths.  She also said that for her to move on, or ascend as some would call it, all of those timelines must collapse and all of those other earths must rapidly merge into our earth in the present time and space so that there would be only one true earth remaining.  That is the one that will eventually move on.

So this is a pretty hefty piece of information here.  These are more pieces of the grand puzzle that we are trying to put together!
Posted by Carla Fox at 5:19 PM