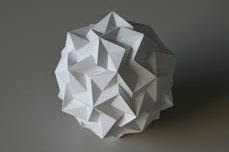 This past week I watched a very interesting episode on the PBS show Nova dealing with origami.  What a fascinating subject!  In short, origami is the Japanese art of taking a single flat sheet of paper and folding it into a 3rd dimensional shape.  Currently, cutting edge technology and computer science is being applied to this ancient art to create a variety of shapes and purposes.

Now, the following explanation is quite scientific, and I will give a somewhat simplified version.  Astrophysicists at Johns Hopkins University are creating a model of our universe using the principals of origami.  The theory that they have been working on says that dark matter, which is invisible, forms a skeleton or template for our universe.  Physical structures then form around this template.  These are galaxies, stars, planets, etc.  It is almost as if particles of physical matter are attracted to and stick to the dark matter framework.

In this research, scientists took a very large sheet of paper and folded it origami style along the pathways where galaxies have formed.  In other words, these formations are not randomly placed, but instead follow the dark matter skeleton.  In this way, concentrations of dark matter can be mapped.  Where there are more galaxies, there are more folds in the paper, thus more dark matter is in that location.They have also shown that there are filaments that stream out from each galaxy connecting it to other nearby galaxies to form patterns much like a web.

The whole origami pattern on the sheet of paper is called a twist fold.  When the large paper map is folded and then straightened out and folded up again, the folds twist in on themselves and then untwist.  The galaxies in our universe are constantly spinning, or twisting in addition to interacting with other galaxies with this energetic twisting motion.  If you search the internet for “twist fold”, you will find many videos, photos and instructions for how to create them.

Our universe can be shown to be formed like an origami model.  The sheet of dark matter folds in a very geometric way to build a cosmic web of matter.  Now, I find this topic so fascinating that I have ordered a few origami books to try my hand at this ancient art.  The story does not end here!  As I was watching the show, particularly this segment, I found that I was tapping into the aspect of myself that knows how to pilot a space ship.  A stream of consciousness of information was downloading at the same time.  I even had to watch the show a second time to get the pertinent scientific facts that I wrote about here, as I was certainly in a different place the first time!  It is truly amazing how everyday events can trigger these kinds of memories.  Maybe this has just happened for you by reading this post! If you are as fascinated by all of this as I am, I encourage you to follow the link at the beginning of this post and watch the show for yourself.

So, as I have probably twisted your brains enough, the next post will delve into my personal take on receiving this information.  Stay tuned!
Posted by Carla Fox at 9:23 AM