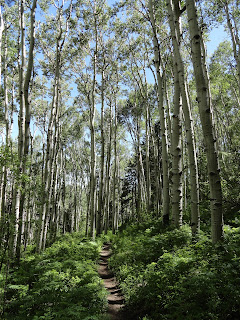 This past week, I hiked up a trail that I usually do only once a season for a variety of reasons.  This trail is fairly steep and somewhat overgrown, and twists through a very expansive and ancient aspen forest.  Unfortunately, for at least the past 4 years, I have seen a steady destruction of this forest because of a disease that has been attacking and killing the aspens.  The trees are dying and then falling down all over the place.  In some sections of the forest, it looks like a bomb has gone off!  There is no solution to this, so the trees are just left there to eventually decay and dissolve into the forest floor.

What is interesting about this aspen forest is that it was some sort of encampment or way station for the Basque sheep herders that spent winters with their sheep in northern New Mexico, and summers in the cool mountains of southern Colorado in several places like this one.  How do I know this?  The sheep herders carved their names and often the current date on the bark of the trees.  These are called arborglyphs, and are considered precious historical records. 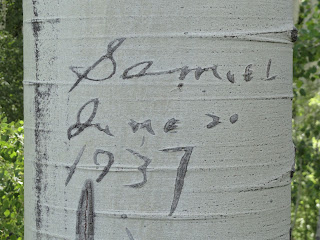 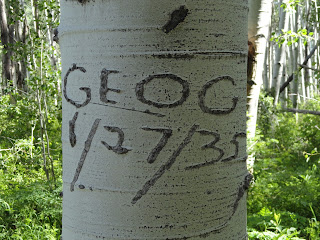 Now these records are begin lost because the trees are dying and falling down, unless at some point in the past, someone may have done a photographic survey and those photos are in an archive somewhere.  Even though I have hiked this trail many times, I decided last week to photograph the oldest arbor glyphs that I could find there for the first time.  There are many “modern” carvings of initials, names and dates, but many of the the very oldest ones are written in script, not the block letters of the later ones. 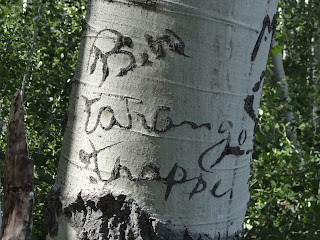 As I walked through the aspen forest and photographed, the oldest graffiti I could find was from 1932 by Adolpho Trujillo.  He actually signed several trees. 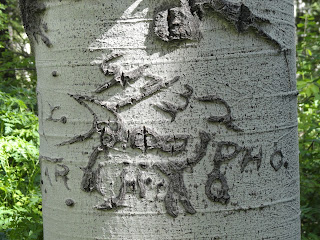 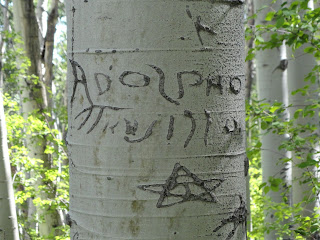 The phrase “ashes to ashes, and dust to dust” came to mind with some sadness.  I compared the big ancient trees to the human race, and the names, initials and dates, even up to the present time, as the individuals within the human race.  Is this how we are to end our sojourn here on planet earth?  After standing tall and strong for millennia, gradually getting weaker and sicker until we finally fall down and decay away, becoming nothing more than a dim memory?  There have been other non human races occupying this planet in times past, and there will be again.

On the positive side, the destruction of the aspen forest has created a different habitat for plants to grow in.  I am now seeing plants and bushes that love more sunshine growing where it was previously mostly shady.  There is nothing wrong with that.  We live in a dynamic and changing universe.  If our planet becomes inhospitable to humans, not to worry, as our souls will travel on and find other realms to inhabit.  Maybe it will be sad for some to leave this planet for new horizons, but for others it will be the start of another grand adventure.  In a sense, the destruction of the old aspen trees will make way for something new and beautiful, too.  Time will tell.
Posted by Carla Fox at 7:50 PM