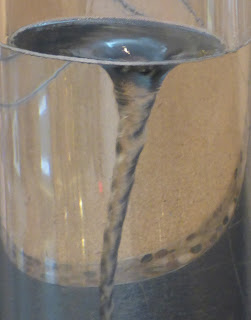 Earlier today, I had a long overdue massage.  I had been going routinely up until a few years ago when my regular practitioner moved and no longer has adequate space in her home for her practice. This was my second time trying out a new practitioner, so I was much more relaxed and at ease than the first time I went to her.

Shortly after the massage started and I got really relaxed, I noticed a very small but brightly glowing spot of light in my inner vision that seemed to be far off in the distance.  You know how these things go—at first you just think that your eyes are playing tricks on you, so you ignore the phenomenon and check back in a bit to see if it is still there.  In this case, it was.

So I decided to investigate.  As I drifted closer, I realized that the glowing light was actually an opening or portal with the bright light shining through.  Being the intrepid adventurer I am, I immediately proceeded to dive right into this portal.  After traveling inside of what I would describe as a wormhole, I popped out the other side into what my guidance told me was another universe.  Whoa!  That made sense since the atmosphere was very different, almost like taking in a big breath of fresh air, but not like any air that I have ever been exposed to.  It also had a very slightly greenish-yellow tinge to it, like the color of newly emerging leaves in the spring, but very pale and transparent at the same time.

During the rest of the massage, I asked for more information about this.  Up until now I had been exiting our universe at the very top after going up the dimensional scale through the 12 dimensions and out into the multiverse.  When one exits out the top and then hovers above, it is possible to see many universes at the same time.  I have previously described this as if one is looking at a bunch of grapes.  Now I am seeing that there may be many exit points from our universe that take one directly into an adjacent universe.  In other words, this is where the skin or boundaries of the universes touch.

When I did my shamanic training, we worked with the concept of an assemblage point.  This is a location on the surface of one’s Luminous Energy Field where information comes into the field from external sources.  In other words, it is your personal filter for information coming in, and its location is different for everyone according to their existing affinities, belief systems and cultural biases.  Just picture the swirl of water going down a drain and you have an idea of what this looks like from outside the LEF.

Then it hit me.  Because we live in a system where structures are repeated and just the size is different, our universe is structured very similarly to way that our LEF is.  It is the tried and true concept of the macrocosm and the microcosm.  As above, so below.  So now I see that my exit point from this universe will lead me out and into the multiverse, whereas someone else’s exit point may lead them directly into another universe.  Each one’s exit point will be determined by their mission, purpose and ultimate goals.

I am starting to formulate the teaching and journeys for my next Rise Multiversity workshop on March 12th, but right now it looks like I will lead the group on the journey that I have mapped that takes one out of our universe after exiting the 4th dimensional earthly matrix upon death.  There are lots of twists and turns to this journey, and this process may not go smoothly for everyone, but at least you will all have an idea of what to expect when the time comes.  What I experienced today during my massage has given me additional information on this whole process.  The mapping continues!
Posted by Carla Fox at 2:49 PM