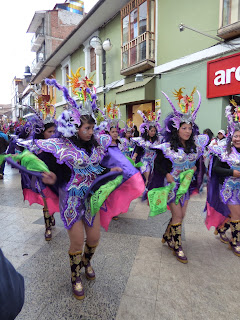 On our way to our next destination, Puno, we were informed that there was a big celebration going on in town, and that traffic might be a problem.  The celebration was for the graduating class from the local university.  We reached our hotel just before dinner, checked in, and my roommate Sheila and I and a few others promptly went out to find something to eat.

As luck (ha!) would have it, we were located about a block off of the main street that went through downtown.  Even though the daytime festivities were finished, nighttime activities were in full swing.  A parade had been going on for who knows how long down that main street, and as we dodged through the people to get to our restaurant, I took a few photos.  The young ladies were dressed in skimpy outfits with either feathered wings on their backs, or headdresses with horns on their heads, and chunky high heeled boots.  The young men were dressed as devilish matadors.  In between groups of either all men or all women that were dancing down the street were marching bands that played mainly big bass drums, smaller drums and all kinds of horns.  It was a very loud and crazy scene! 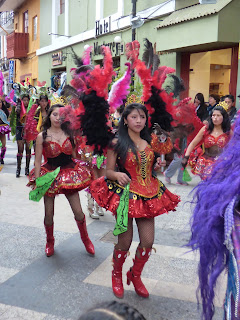 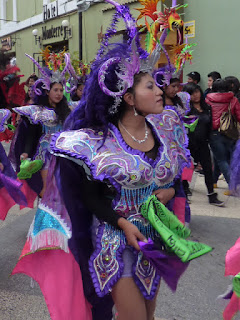 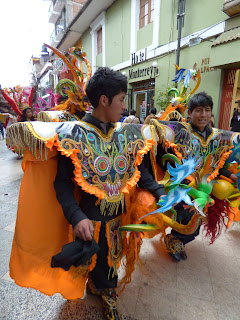 I have to mention here that at least in Bolivia and Peru, and probably most other South American countries, they party a lot.  Any excuse for a celebration, party, or parade, and this happens quite often throughout the year.  I am talking about Catholic religious holidays, graduations, elections, birthdays, anniversaries, public holidays, and many more.  I have been in Cuzco, Peru twice in the month of June, and that month is one big party with parades, fireworks, rock bands and marching bands.

By the time we got done with dinner, it was dark outside, and I took a few more photos.  What do you think of this?  Of course with night shots, the shutter stays open a bit longer, and some photos turned out a bit blurry.  In the photos below, though, the matador costumes were perfectly in focus, so there was no blur.  I only noticed the “blue snake” the next day when I looked back at my photos.  It covers the lower edge of the costume of the matador on the right, and I would have seen it in the physical if it was lying in the street.  I have to mention that there was clearly a lot of drinking going on among the parade participants and the observers, too 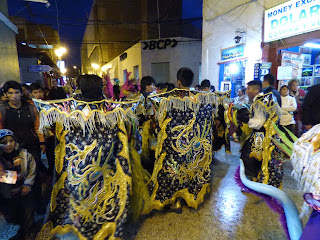 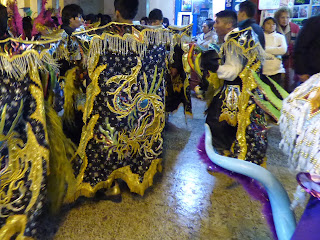 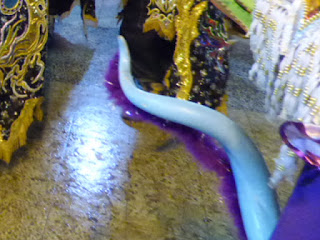 I heard the parade and marching bands going on until at least 1:30 AM, and some of the people in our group were up until 3 AM.  Most of us were worn out by the next morning, including me.  Our guide Julie said that this celebration was one big event of devil worship.  I believe it!
Posted by Carla Fox at 2:16 PM