A New and Final Viewpoint 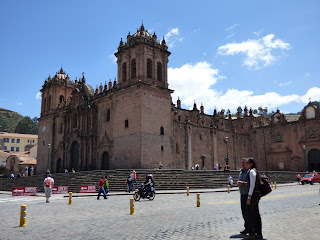 The last stop on my final day’s walkabout was the Cusco Cathedral, which is located on the central square, the Plaza de Armas. Most if not all of the major churches and cathedrals in the countries conquered by the Spanish were built on top of the places where the Inca and even pre Inca people built their sacred temples, and this one is no exception.  These ancient people knew where the vortexes and stargates were and took advantage of those natural energies for their ceremonial locations.  The Spanish knew this, too, and systematically tore down those ancient buildings and replaced them with monuments to the Catholic religion.

The cathedral is quite a place, with some very significant paintings, other artifacts and a huge main altar that is covered in silver.  I especially like the 2 murals that depict the Virgin Mary as the spirit of the earth, or Pachamama.  In both of these large paintings, she is wearing a dress that is more pyramidal in shape, very wide at the bottom, to represent the sacred mountains, or Apus.  Baby Jesus looks like a toy doll that is stuck on her shoulder like a boutonniere.  Clearly the Earth Mother was much more important to the formally trained native painters than Jesus was. 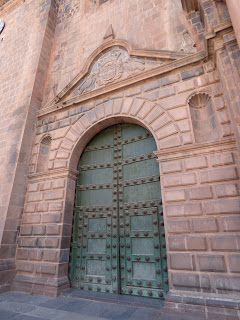 There is also a large granite “egg”, maybe 2 ½ feet tall, that sits inside next to the main entrance to the cathedral.  This is probably the most important item in the place, as it represents the cosmic egg of creation.  It is common for shamans of local traditions to start their initiation pilgrimages at the cathedral, and I am sure that the egg plays an important part in the asking for blessings for their journey.  Fortunately, the catholic authorities have not removed the egg because of the spiritual and ”heathen” practices associated with it, but they have placed a clear plastic box over it so that people can no longer actually touch it.  Coca leaf offerings had been placed on the top of the box when I was there.

During my last visit to the cathedral in 2007, I had enjoyed quite a deep and tranquil meditation sitting in front of one of the side altars.  Not so this time around.  I couldn’t find any place that felt as nice as that, so I sat in front of the main silver altar and did some tracking.  I could detect the vortex of positive energy coming up from deep in the earth, but it had been capped off at the earth’s surface with a large black energetic disc.  The main altar was then constructed right on top of that!   This energy had been put in place at some time during the consecration of the cathedral, and at least on some level, spells, curses and hexes had been used to do this. Someone wanted to keep this vortex permanently plugged up.  I proceeded to do some cleanup work there, but this was a job that was much bigger than what I could do, so the changes were only partial.  Everything did feel lighter and clearer by the time I left, and the vortex was stronger and actually pushing up against the black disc from underneath.  Perhaps when the time comes for the throwing off of such artificially installed energies, this place will return to its natural and organic nature.

So, why did I just notice these energy dynamics this time around and not previously?  I can only surmise that because I am in a whole different place with my own spiritual evolution, I am noticing things that went unnoticed before.  Also, because of my previous unawareness of the synthetic matrix that is embedded in all religious structures, it is possible that I had been tuning into the seductive yet entrapping nature of this energy during past visits, and not the true organic that had been prevented from manifesting there.  Now I can honestly say that the only organic and sacred item in that whole place was the granite egg by the door.  A long time ago, a friend of mine said that it was being used as a door stop.  In light of everything, I am surprised that it is still there at all.

My last stop before returning to the hotel was to have lunch at one of my favorite restaurants on the plaza, “Papillon”, which means butterfly.  I got the last remaining seat on their open air balcony, and had a wonderful bowl of creole soup and a salad.  A Peruvian group played their pan flute music while I whiled away my last hour in Cusco just watching the people in the plaza below me.  I’d go back in a heartbeat, as you can probably tell!
Posted by Carla Fox at 1:47 PM