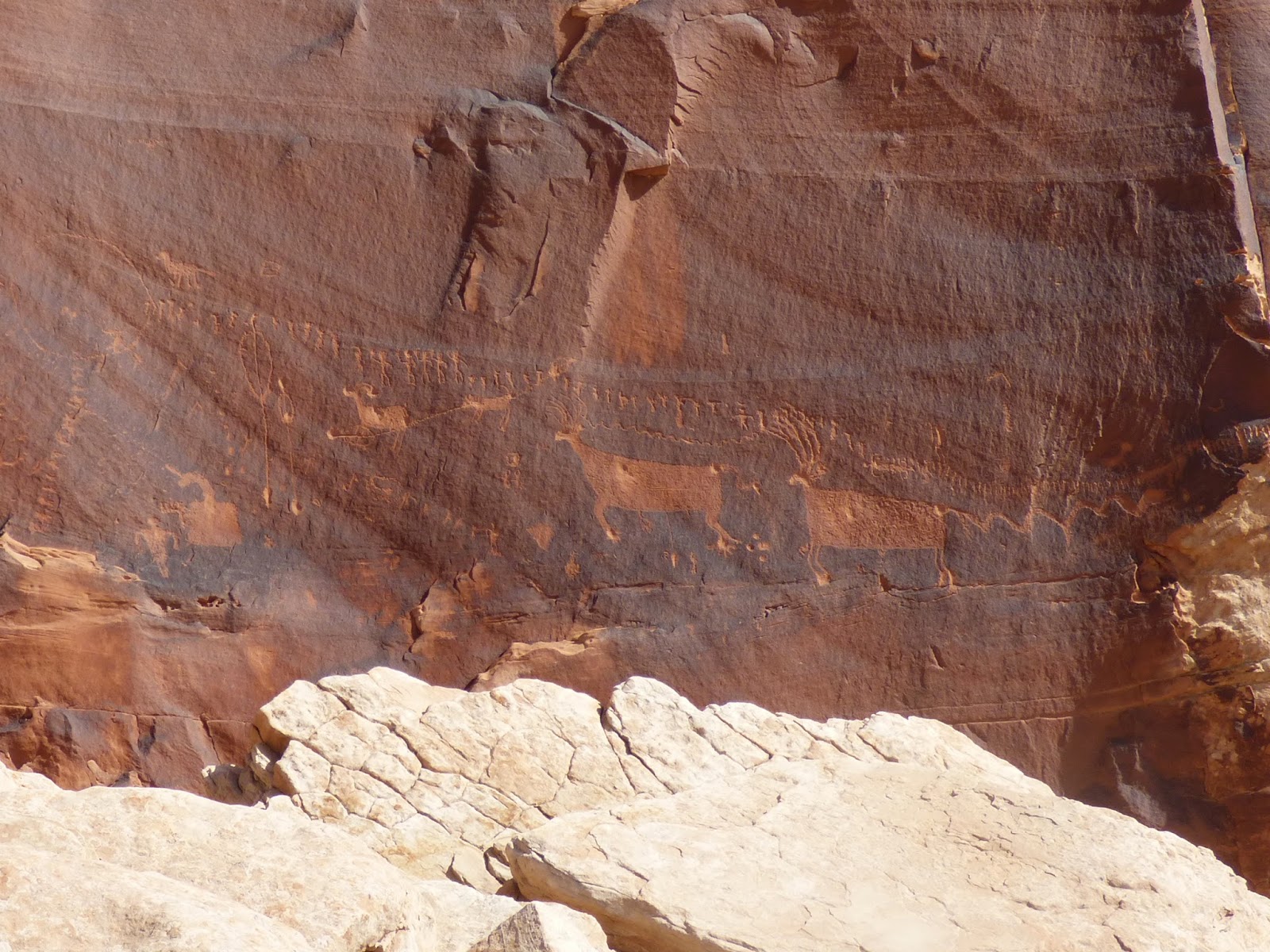 Yesterday I had a chance to do a mini retreat as the weather was unseasonably warm and I really had the urge to get out of town for the day.  I drove the 85 miles into Utah to the trailhead for the Procession Panel archeological site.  This site features a fabulous rock art panel created by the ancient Anasazi Indians during the Basketmaker III period that dated from 500-750 AD.  To get to this rock art panel, one takes a trail that goes up in elevation almost 900 feet in 2.82 miles.  The route is a steady upwards hike on the east side of the Comb Ridge monocline, and is almost all on sandstone slickrock.  If you care to go all the way to the top of the monocline after pausing at the rock art panel, you end up teetering on the edge with nowhere else to go but straight down the west side.   And I really mean straight down!  I usually don’t put more than one photo in each blog post, but I couldn’t resist a few extras here. 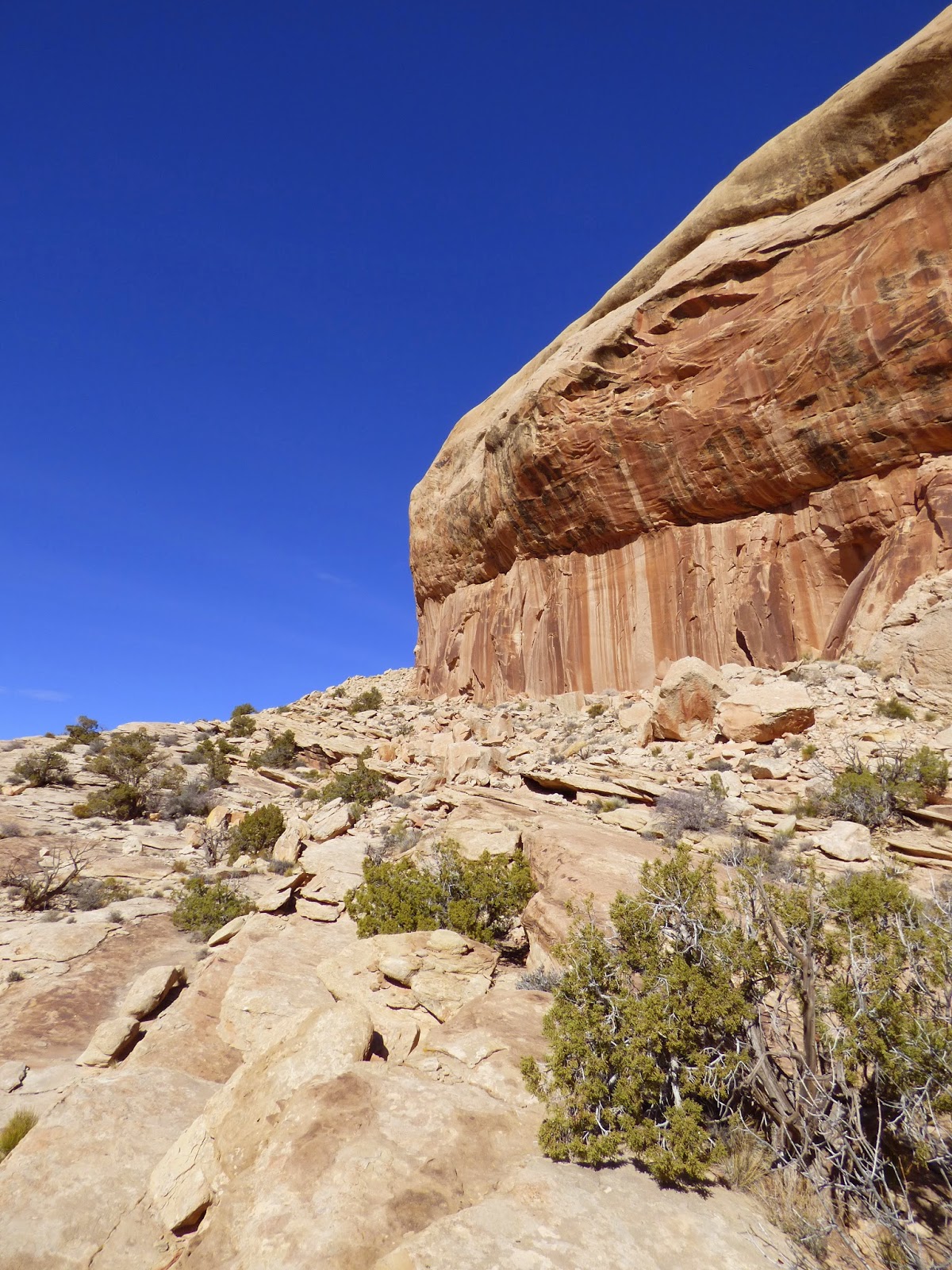 Since yesterday was a week day, and not a busy time of year, I had hoped to have the place all to myself.  What a delight it was to be out in the middle of nowhere with not a person, dog or car in sight!  Not so good if I were to slip and break my leg, but I wasn’t worried about that.  My purpose was to hike to the petroglyph panel and do some tuning in and meditation.  Just sitting and vegging out to get a break from my busy schedule.

Not much is known about what the rock art on the Procession Panel is thought to be depicting. Some say that it is a migration story; others say it symbolizes a gathering around a great kiva.  It features a circle that is about a foot in diameter with 3 streams made up of a total of 179 tiny people connecting to the edge of the circle. 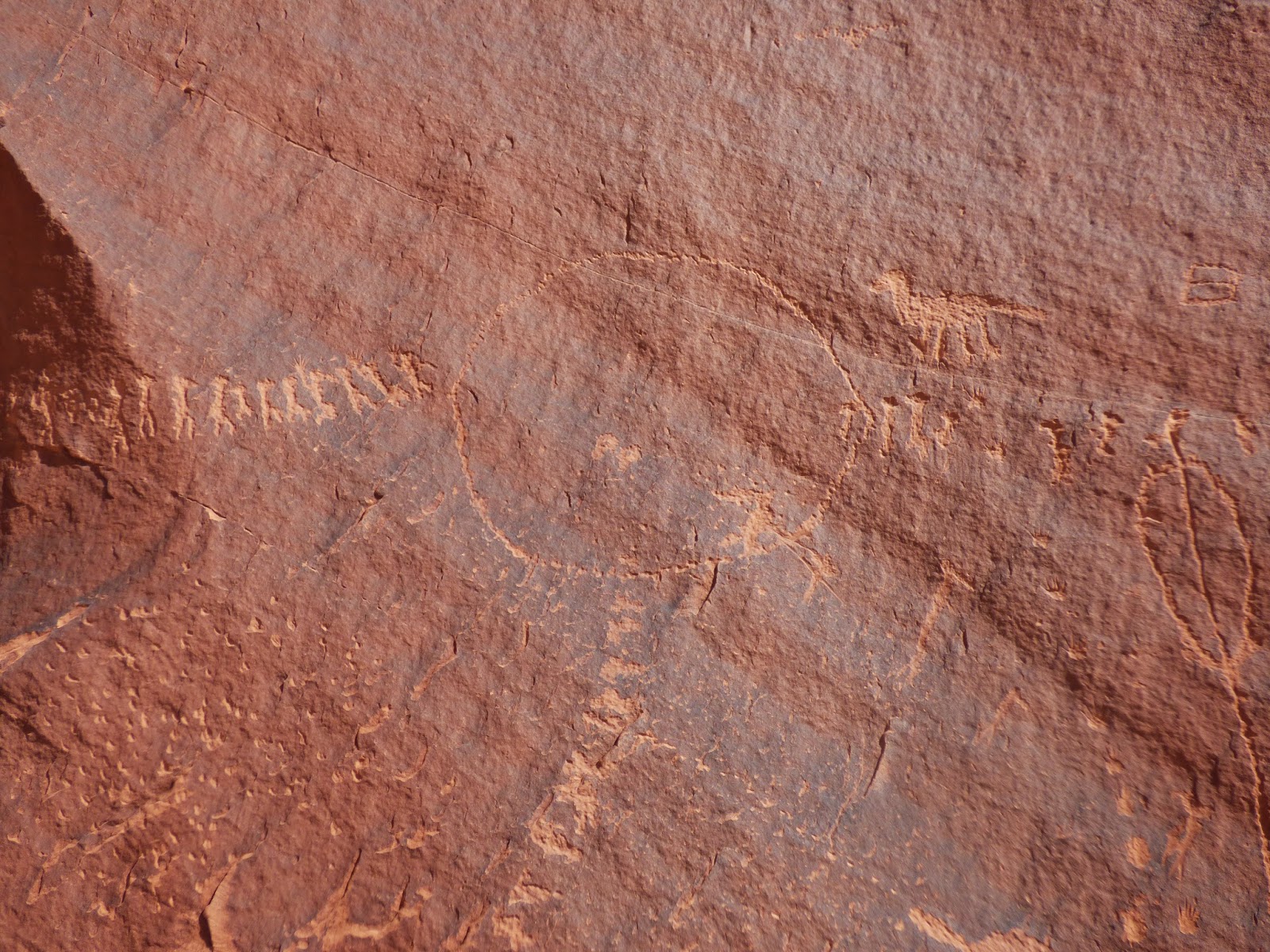 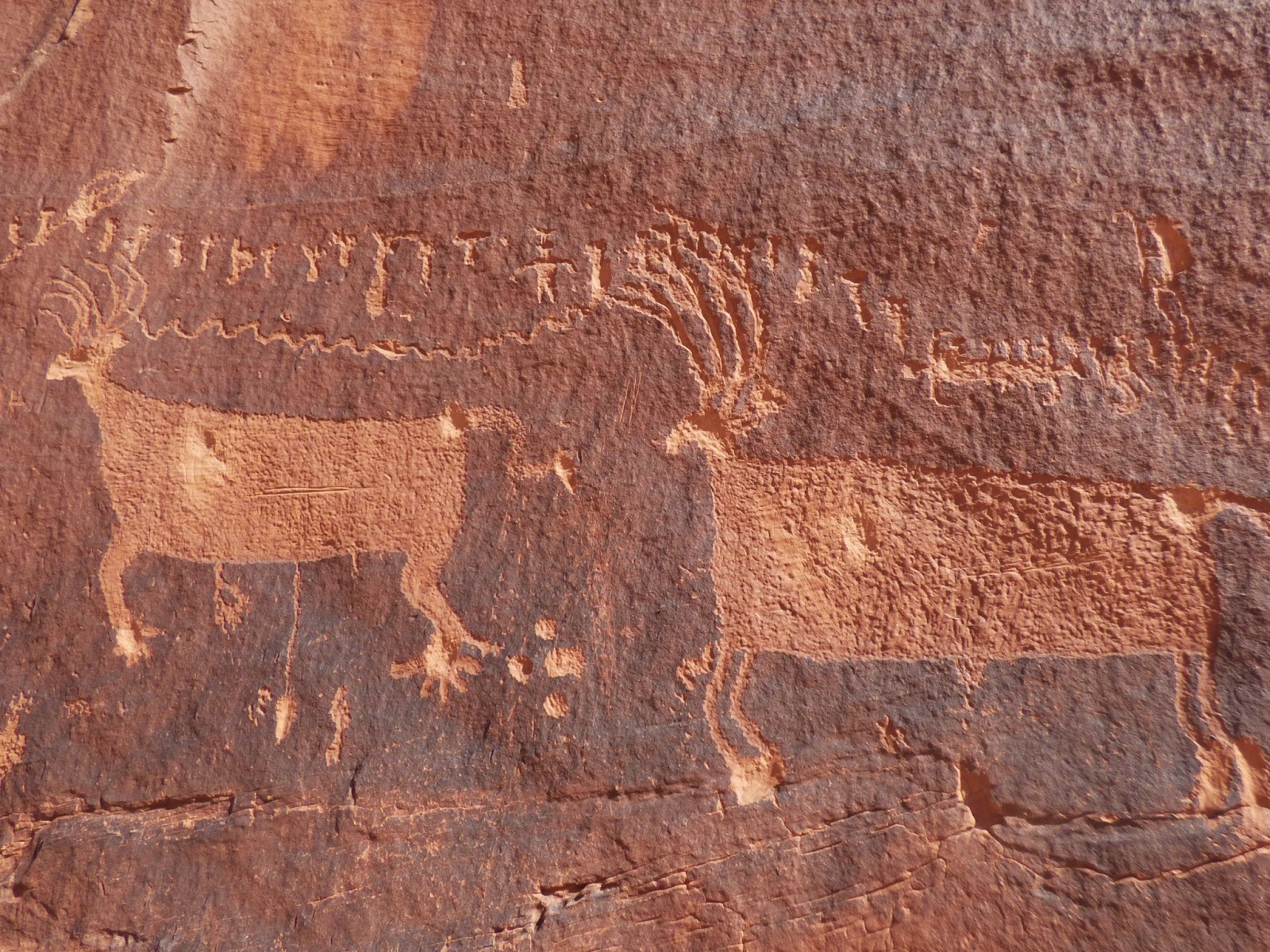 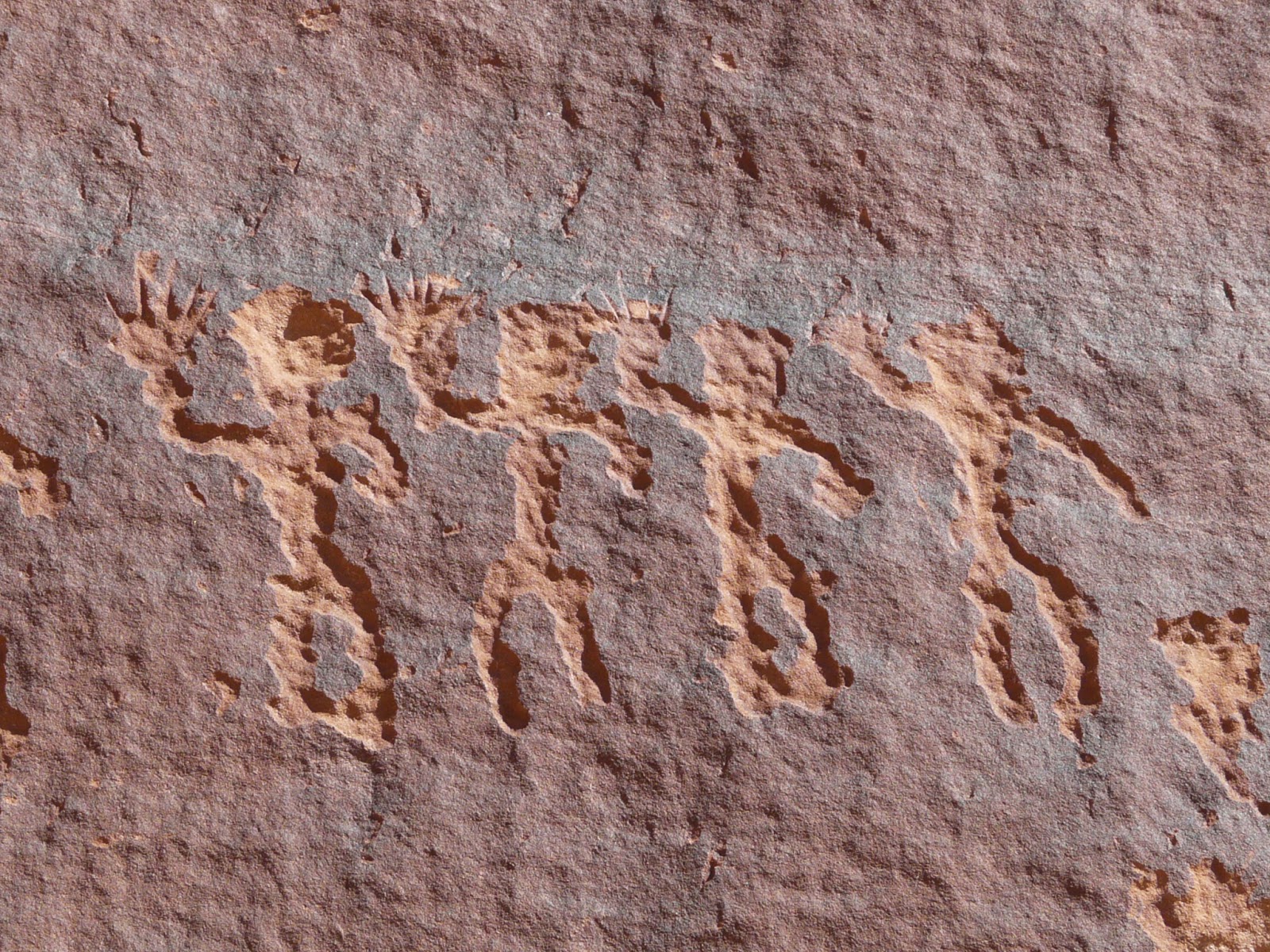 There are many animals in the rock art, including elk, deer, desert bighorn sheep, a few birds and even a mountain lion or two, all pecked into the sandstone.

A few of the tiny people are holding what look like shepherds crooks, and a few others have birds on top of their heads.  All of the animals on either side of the circle are pointed in the direction of the circle, but the interesting thing is that this circle is totally empty except for some random peckings.  So what does it all mean?

Every important site is placed where it is because of the energy that the land holds.  This is true for ancient sites all over the world.  The way I tune in is to actually put my hand on the rock and go into an altered state, and gather impressions.  In addition, this rock wall faces southwest, and may have been an important gathering place for sunset at the winter solstice.

This is what I received at the Procession Panel. “This is a gathering place.  Gather yourself to your core.  This core is strong, stable, safe, knowing and protected.”  I then asked why the circle was empty, and I immediately had the feeling of falling down a very deep pit and being absorbed by the energy of our Earth Mother.  It was almost like having my hand and then my body being sucked into the sandstone inside of the circle.  Wow!!  So did this mean that all of the human figures, and the birds and animals were meant to disappear or be absorbed into the center of the gathering place? Is this a map of some big energetic transition for life on the planet?  I have to say that it felt pretty good to have the core of my being gathered up and then merged with the Heart of the Mother!

Is this really the message of the rock art panel?  Perhaps not, but my energy and psyche interpreted it that way.  If one knows how to work the energy of a sacred site, the personal messages can be very profound in addition to gathering information about that particular site. 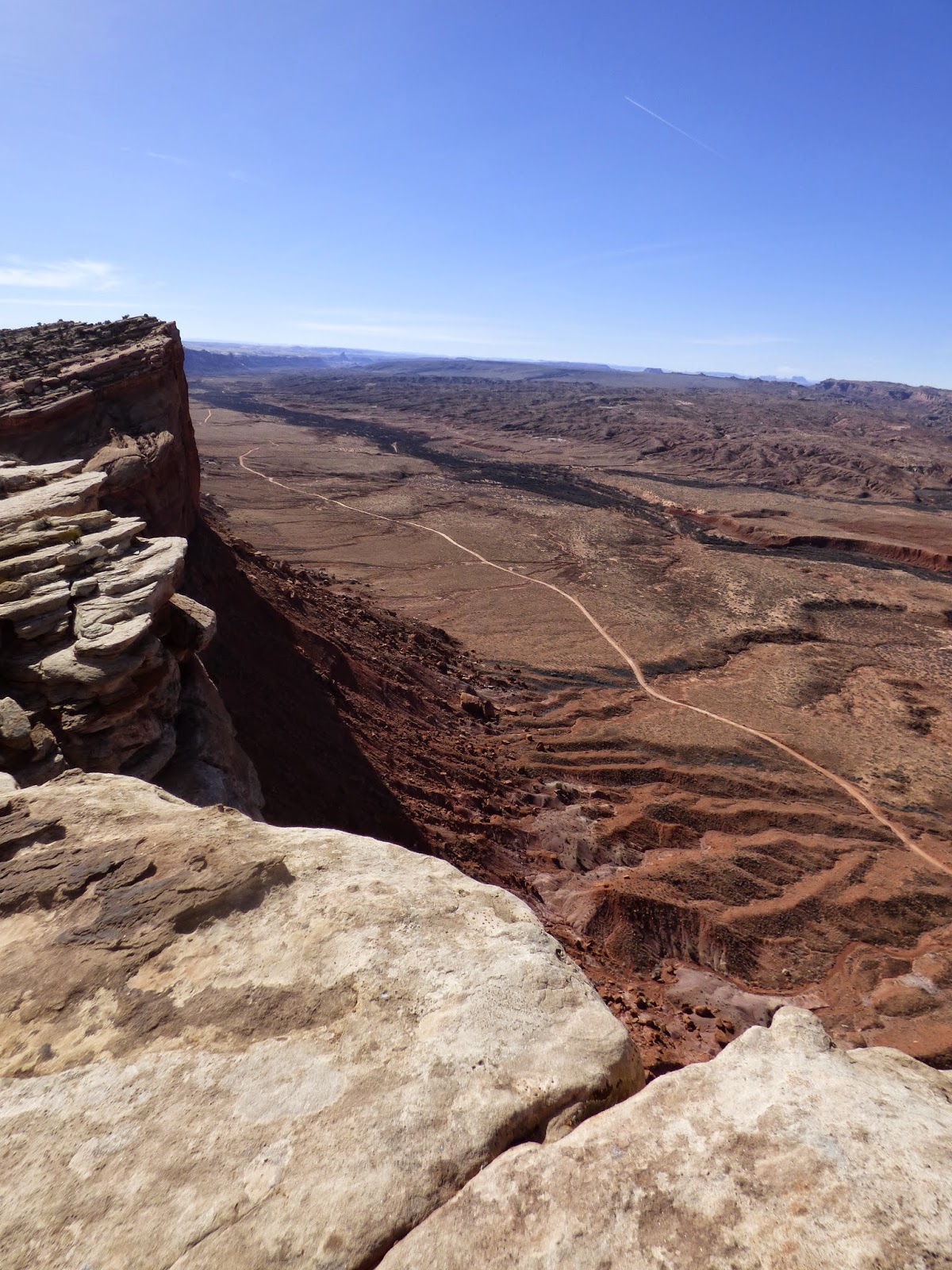 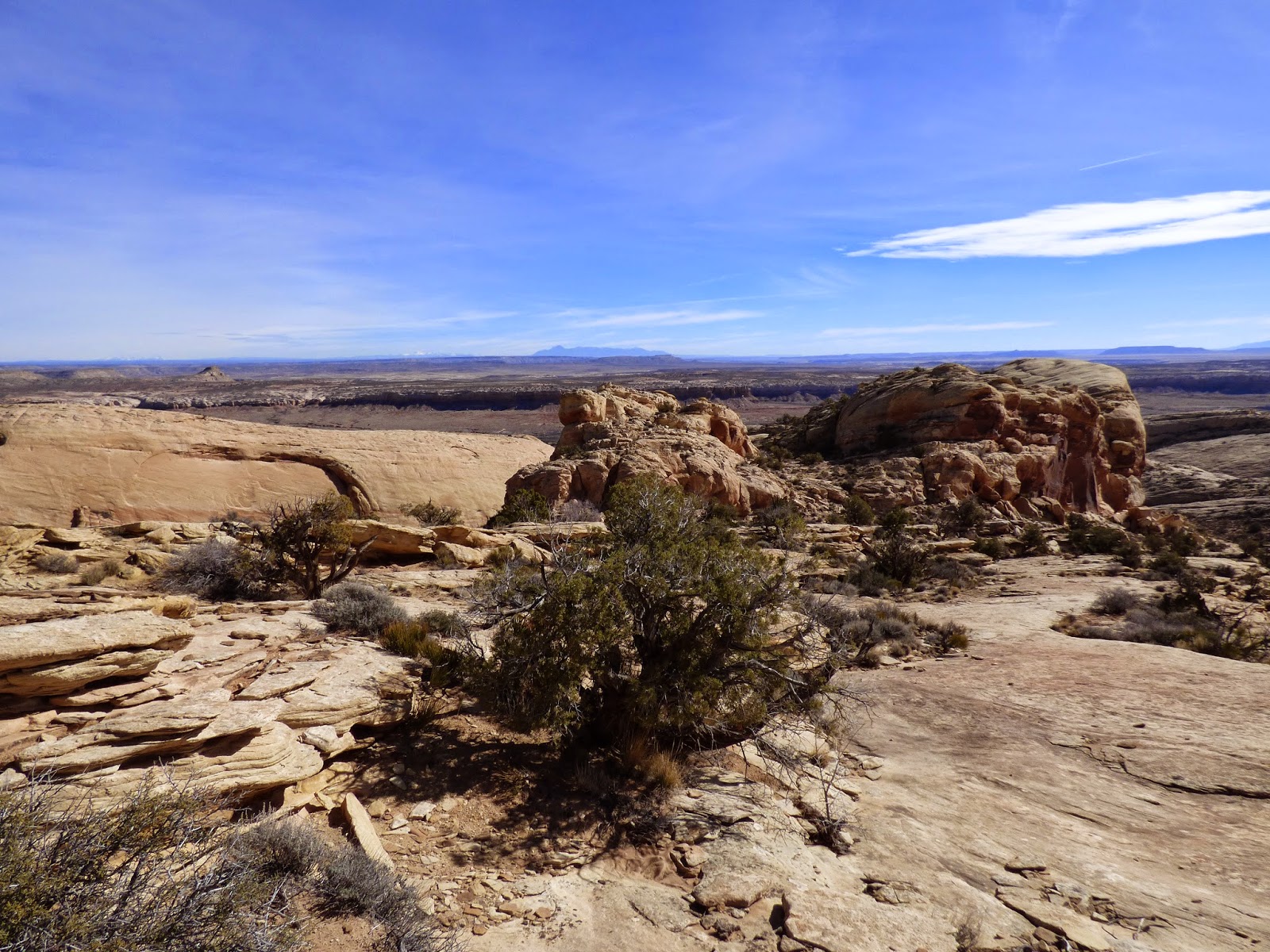 After hanging out with the rock art a bit longer, I proceeded to hike up the sloping slickrock to the very tip of the monocline.  Well, not the very tip, as that can be a bit creepy looking straight down the other side at the sudden drop off.  The 360° views up there were fabulous, and I hated to leave when my time for introspection was complete.  One last stop at the rock art panel on the way back down, and then down the slope to my car and back home.

A nice day like that can be so rejuvenating, and we all owe it to ourselves to take some self nurturing breaks every once in a while.  Most of us are doing yeoman’s work during this time of transition, whether we realize it or not.  Remember that you can assist no one if you yourself are depleted and have given too much away to others.  Your core must be strong and your purpose unwavering.  This is the foundation for your service.