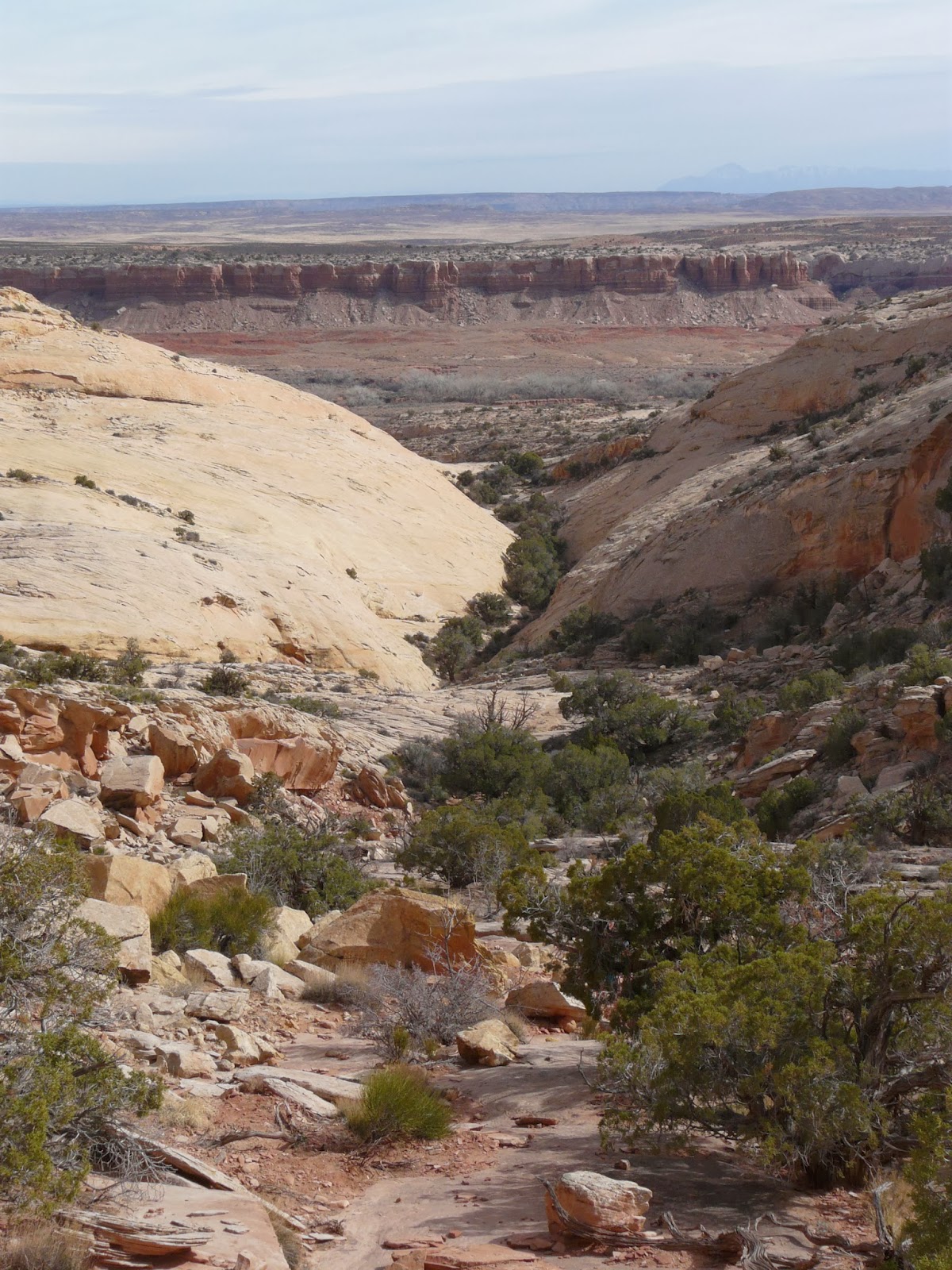 Over the weekend I went hiking with some friends of mine who are fairly new to the area.  We drove west through Bluff, Utah, and several more miles to a road that would take us to the trailhead of a site called the Procession Panel.  This is a somewhat famous rock art panel that is up on a high sandstone uplift called Comb Ridge, named because of its resemblance to a cock’s comb.   Getting up there involves finding the right parking area off of the north/south dirt road that we had turned onto, sliding down a steep embankment, crossing a somewhat muddy creek bed and climbing up the other side.  Then, the trail heads across a sandy and sparsely vegetated area, over an expanse of slickrock, traversing a sloping sandstone surface and into a cut in the ridge that holds enough moisture where some extremely old and large junipers thrive.  After coming out of the area with the junipers, one goes up another steep slope of slickrock, climbs over many loose rocks and voila—the famed petroglyph panel can be found on a vertical rock wall on the right hand side.  All along you are gaining in elevation.  Sounds pretty clear, doesn’t it?  Ha!!!

After some driving up and down the dirt road, we finally found what I thought was the right spot to start the hike.  I had only been there twice before, with the second time 2 years ago, and I had a bit of trouble finding the trailhead.  Nothing out there is marked and one can assume that the BLM wants to keep the many sites hidden from the general public to prevent the rock art from being vandalized.

The hike started out exactly as described, so not a thought occurred to me that we might be on the wrong trail.  Even after seeing a few stone formations and some rock art that I didn’t recognize as we got closer to the high point of the ridge, I still didn’t think that anything was amiss.  It didn’t hit me that we had hiked the wrong trail until we got to the top, saw the vertical rock wall on the right hand side, but with absolutely no rock art to be seen.  I felt like I had landed in the twilight zone.  I was experiencing a discontinuity.

As we sat down for a rest and some snacks, I apologized profusely for the screw-up that deprived the others of seeing the notorious rock art.  They didn’t care, as the views were fabulous and the hike was well worth the climb anyway.  An enjoyable time was had by all, even though I was experiencing a brain fart.  To top it off, when we got back to the parking area, I encountered another friend of mine and her husband who were just starting off on their hike.  They also thought that they were at the right trailhead to hike to the Procession Panel!  Was it solar flares or something in the air that day?  Maybe we were all time warping.

When something so weird happens, I always like to take the event as a lesson to be figured out and made use of.  For me, this is a prime example of when the rational left brain can override the input from the intuitive right brain, thus creating the discontinuity and resulting confusion in thought patterns.   When this happens, one can become very ungrounded and easily manipulated, even programmed by unwanted external input.  The possibilities for controlling masses of people are endless and I am sure that there are many technologies developed that will do this.

It took some time for me to get the fuzz out of my brain.  As I sat near the top of the ridge, I noticed that the next visible rock wall to the north across a gulley looked like where we should have ended up.  Still not sure at that point, but after getting home and checking some previous photos, I was correct.  We were so close.  Probably just one parking area away.  Also, as we went back down the trail, I noticed things that my right brain had been alerting me to, but that the left brain overrode because it assumed that we were on the right trail.  There were some unusually big tree trunks that we had to climb over, an area with a lot of very pointy rocks sticking up out of the sandstone that looked new to me, and a bit of rock art that I even mentioned not seeing before.  I was getting the signals and ignoring them.  Big lesson.

So what to do to avoid something like this happening?  My feeling is that the right brain intuitive nature will never steer you wrong if you are fully connected to your guidance and intuition.  The left brain likes to jump in there and twist things.  We do need it to help analyze and assess information and situations, but it cannot be allowed to be our master.  When you find yourself rationalizing yourself out of any situation, you’re in trouble.  Go with your guts instead.  Luckily, our outing was a fine adventure for everyone.  We even stopped to see a different and easily accessible rock art panel on our way home.  The lesson here?  Don’t ignore signals and guidance.  Use the rational brain to assess what is going on, but then go back to your guidance to determine any course of action.